I get asked by friends why I don't blog anymore. There are so many reasons, but I think the truth is I need a break. I miss baking like crazy but the oven where I'm living now doesn't work. Monitoring the house renovation and shopping for fittings and finishing take up a lot of my time, and I have even stopped my baking classes because I'm tired from running around. Doing a house is very challenging in KK. If I want something more fancy, I'd have to wait about 6 to 8 weeks for it to be shipped in from KL. Right now I'm totally stressed out searching for an oven that is at least triple glazed--or preferably quad--and has pyrolytic cleaning function but there's none here, and there are very few choices even in KL. Brands of ovens are very limited too. If you have a good triple or quad-glazed oven with quick and even heating and pyrolytic cleaning  function, please tell me!

After foreveerrrr, we've reached the stage where we just have to put in the flooring, which is dependent on the window glass being installed which is dependent on a very busy glass & aluminium guy who can't be rushed. Or contacted. I'm at the house everyday--I enjoy going through the process of building a house, but am beginning to hate making decisions--and I am living breathing house renovation, nothing else. Cross my fingers and toes, but I think the house should be ready by June. I'll have a 9 feet by 3.5 feet kitchen island then, and I'll be back with a vengeance. Promise. 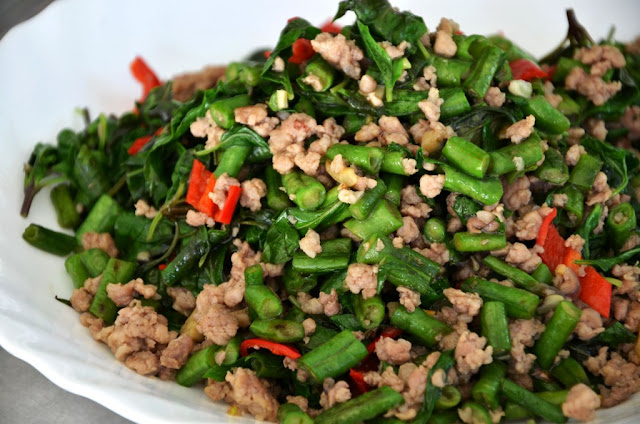 
Here's a very simple, easy-to-cook but delicious Vietnamese/Thai dish that my new friend from Hong Kong taught me. Amy's Vietnamese long beans with Thai basil and pork mince was totally devoured within 5 minutes on the table.

This dish is best made with the old-fashioned green long beans. I couldn't find Lee Kum Kee's shrimp paste so I had to use oyster sauce for the xien/umami taste. Adjust the heat level by the amount of chilies (I didn't use bird's eyes chilies) and chili oil. For those who love the flavor of Thai basil (which is stronger than sweet basil) and veggies, this is a great dish to eat with rice. If I had iceberg lettuce, I'd use them as wraps. Kids will find this dish too vegetarian and 'minty' as my son did. Still, cook this and I know you'll like it. 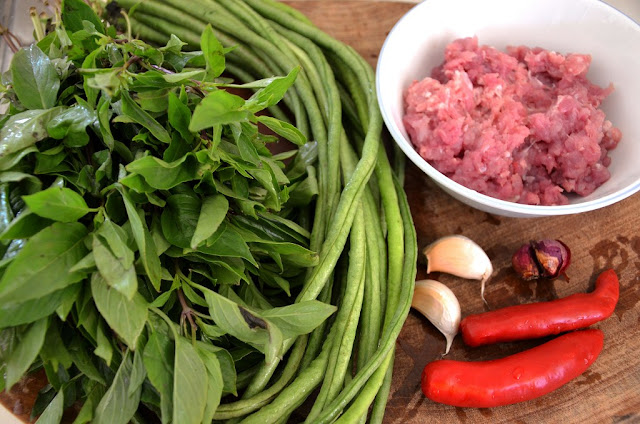 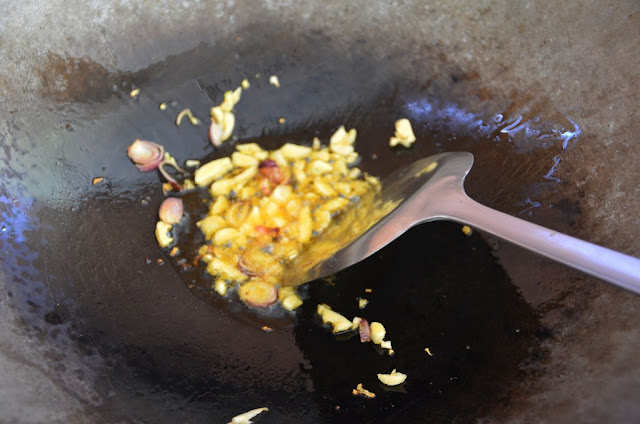 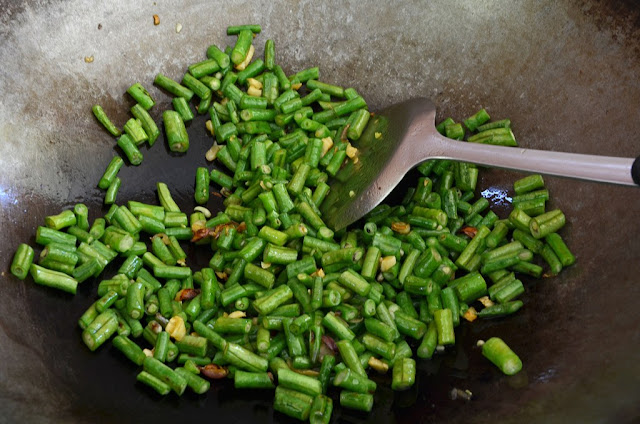 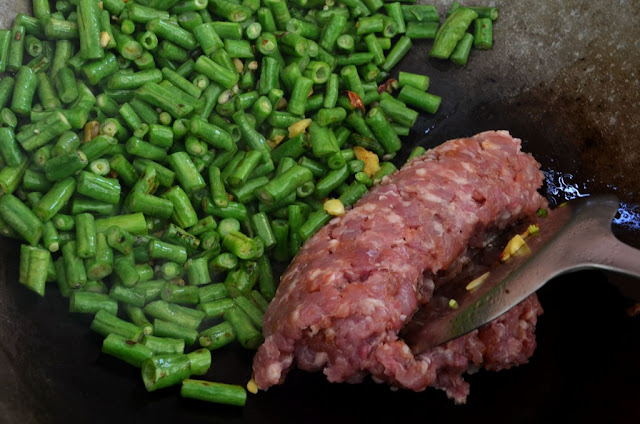 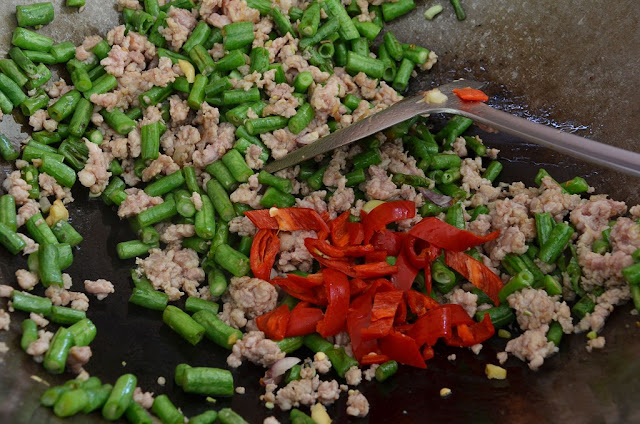 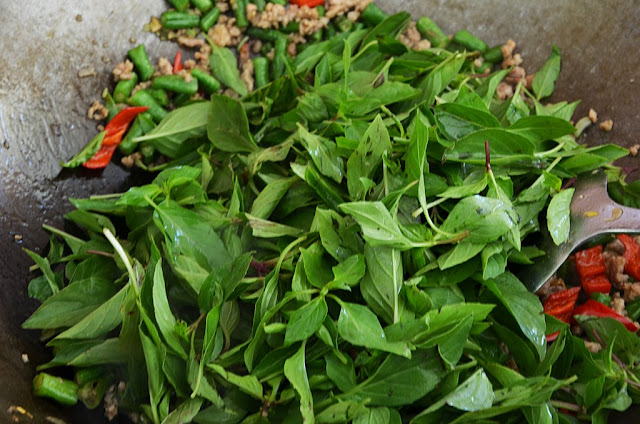 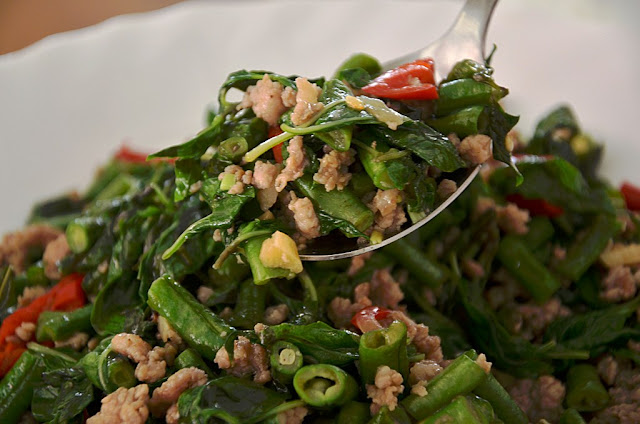 1. Heat up a wok. Add oil and fry the garlic, onions and long beans, adding a large pinch of salt, under medium heat. Push the beans to the side of the wok, or dish it out. Add the pork (I prefer not to add more oil but you can), stirring well to break up it up, and then add the chilies.
2. Add the shrimp paste (substitute with chicken stock powder or oyster sauce as last option) and stir well to mix. Continue to stir-fry until all the liquid is gone (the dish tastes better dry). Season with more salt and shrimp paste if necessary.
3. Turn the heat to high, add the basil leaves, stir through and dish up.

Serve with hot rice. I like it with crisp iceberg lettuce.
Posted by terri@adailyobsession at 6:06 PM 91 Hungry Comments

Here's an easy one but it's oh-so-yummy especially when done with very fresh tiger prawns! 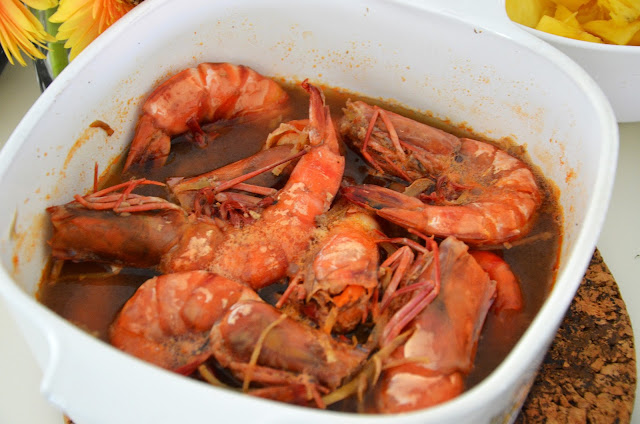 1. Devein and trim off the feelers and sharp tips of the prawns, and legs as well if like.
2. Heat up a non-reactive pot (glass or ceramic), add sesame oil and fry the ginger and prawns on both sides until shell is bright red.
3. Add all the wine, cover and let wine come to a boil.
4. Remove cover, add salt to taste and turn heat off. Glass or ceramic pots stay hot for a long time so do not overcook.
5. Serve hot as a soup. Very comforting and nourishing. 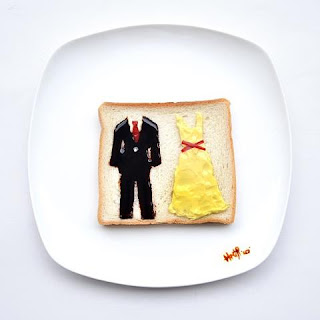 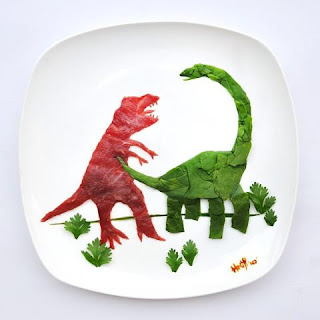 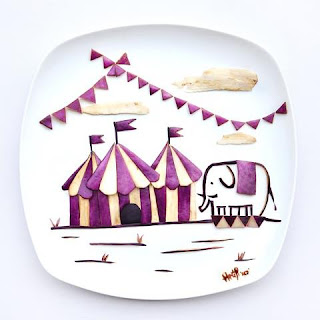 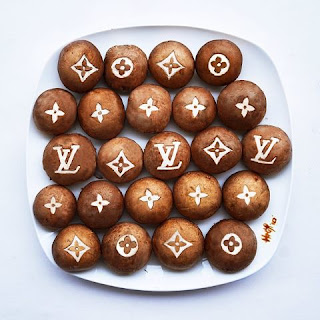 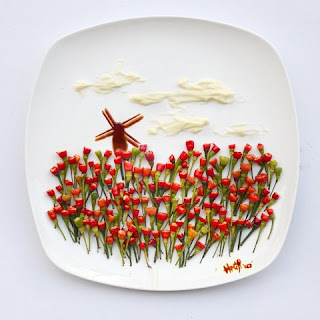 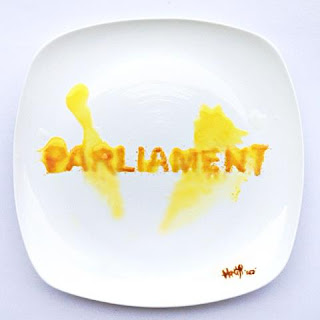 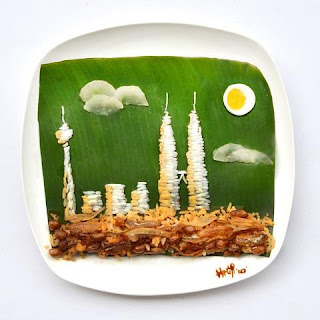 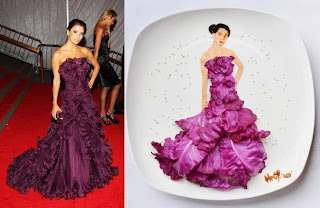 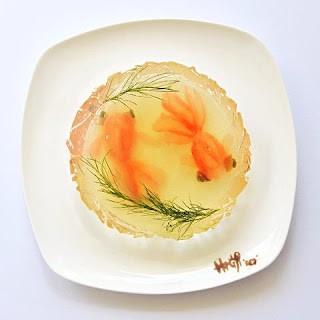 Day 29:  Goldfish In My Consomme 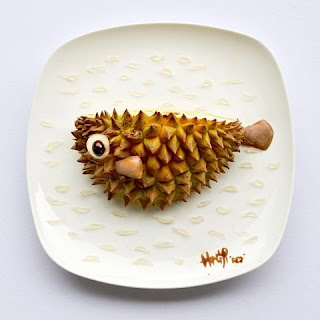 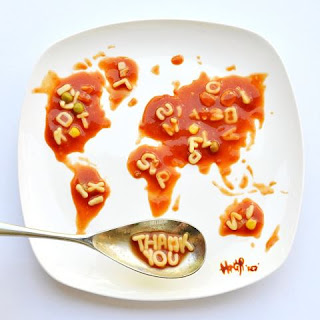 Day 31: Thank You!
Posted by terri@adailyobsession at 1:18 PM 36 Hungry Comments 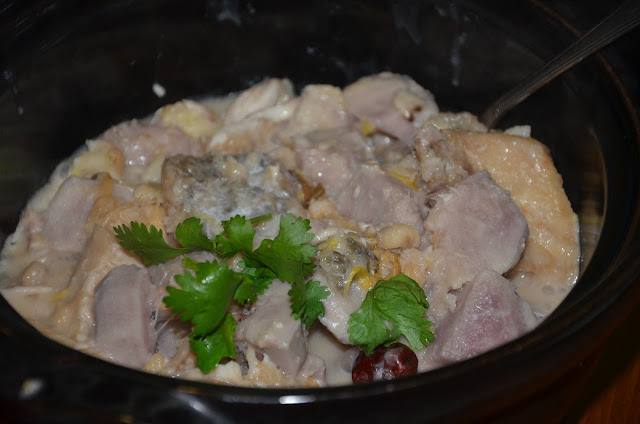 
I've been busy and lazy--bad combination. It's really hard to cook now that both boys are not home and the rest of my family--me, my mom, Hub and my daughter, who is based between Shanghai and here for this year--is always on a diet, either to loose weight for health or to fit into apparel that are one size too small. I used to be skin and bones, weighing 52 kgs after my third kid was born, and was known (and envied by less lucky friends) for eating huge portions without gaining weight. Now I can't loose weight even when I starve myself. Last week, my daughter forced me into a hip hop class at her regular gym. After 15 minutes and feeling stupid always being a step behind, I caught myself in the mirror rolling my shoulders and shrugging my body and I looked so stupid, I ran out of the class. I'd rather be fat.
So, did you read recently that a diet big on fish can reduce your chance of a heart attack by a whopping %tage? The more fish I eat, the more uncomfortable I get about eating other meat. Maybe it's time I turn vegetarian, which is not hard because good bacon and beef are hard to find here.
Alu Alu Restaurant's taro fish head claypot is their best dish, in our opinion, but lately while the taste is still awesome, getting a piece of taro is like going on a treasure hunt. Sometimes they even forget to spike the dish with dong gui, a Chinese herb that makes the dish so extraordinary. So, as every decent mom would do, I cloned the dish at home and got it right first time, with the help of my kids who told me that Alu Alu's white sauce is definitely milk, not cream, and that there is plenty of chicken stock powder flavor. Better than Alu Alu's said my daughter at first bite, which prompted her brother to call her an ass-kisser.
I cooked the dish again recently, this time adding the sauce to the fish just before serving so that the fish doesn't break up. I am so pleased with the results. I hope you like it too. If fish head is not to your taste (poor you), you can use fish fillet slices (poor you) with skin on so that the fish won't break up. 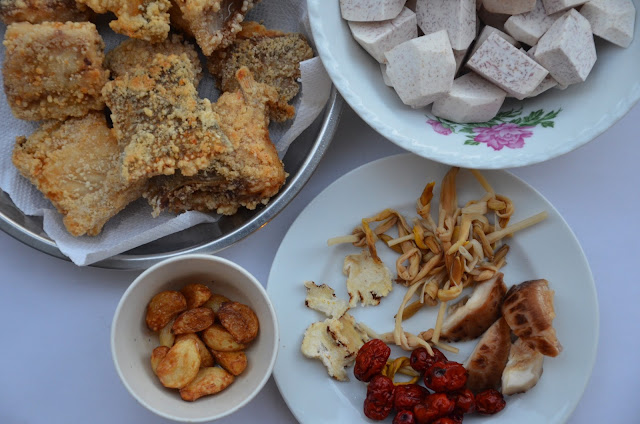 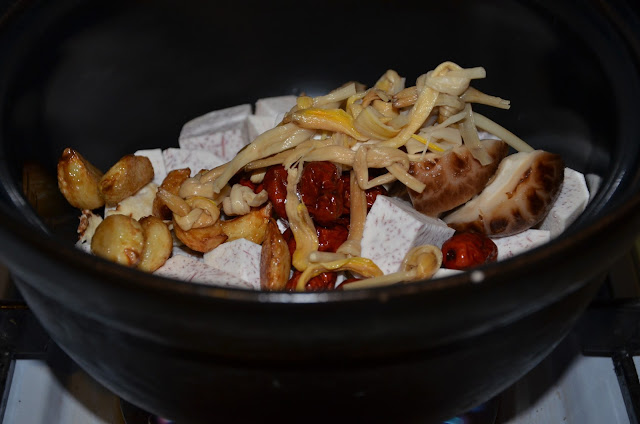 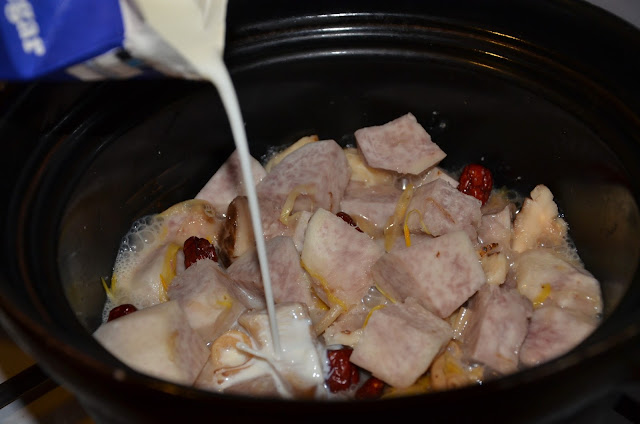 Fish Head & Taro Claypot
400 gm fish head (grouper is good), in chunks, or thick slices of fish fillet skin on
300 gm taro, in small chunks
6 to 8 pips of whole garlic, peeled
10 to 15 dried lily buds, soaked, hard tip removed & tied in a knot
6 to 8 red dates, soaked and slit once on the side to release flavor
2 to 4 very thin pieces of dried dong gui
1 thin slice of fresh ginger
2 T dried cloud ears, soaked, or 2 pieces dried Chinese mushrooms
cilantro for garnish
2 tsp chicken stock powder
3/4 cup fresh milk
1 to 1 1/2 cups water
salt & white pepper to taste
1/2 tsp castor sugar (optional)
veg oil
1 cup potato starch flour
1 egg white
1. Season the fish with salt and pepper. Massage in the egg white. Put potato starch into a plastic bag and add the fish piece by piece, shaking to coat thoroughly. Shake off excess flour. Deep-fry the garlic pips until golden, remove and then fry the fish until just cooked. Remove and drain on kitchen paper.
2. Put the lily buds, red dates, mushroom or cloud's ears, ginger, dong gui and taro into a pot over medium heat (if like, add some oil before adding these items) and add the water and chicken stock. Cover. When sauce boils, lower the fire and season with salt and pepper, and sugar if using. When the taro is tender, add the milk. Season to taste, adding more milk or water or chicken stock if necessary. At the same time, heat up a large claypot until a drop of water sizzles when dripped into the pot. Arrange the fish slices into the claypot and pour the sauce over the fish. Top with the cilantro and serve immediately. Eat with rice. You can also cook everything in the claypot (but the dish won't have a dramatic sizzle) but be careful when turning the fish because it can break up and disintegrate.
Posted by terri@adailyobsession at 4:49 PM 50 Hungry Comments