Come Eat With Us: Delifrance

I'm doing this with a lot of trepidation: I love food and I'm pretty good in the kitchen but I'm not an accomplished food-writer/critic/professional cook. My favorite foodbloggers like Grabyourfork (stomach-grabbing pictures & reviews but she's def. not a cook!), Realthai (great pics also, with lots of info & yummy recipes that work) and Khiewchanta (wonderful, no-fail Thai recipes, so-so pics) intimidate me. Until last night, when I had such a lousy meal that I decided enough is enough, I'm gonna food-blog cos there must be people out there like me who love to eat and have eaten their fair share of good (and bad) food but aren't represented because they, like me, aren't 'professional' enough.


Another reason to blog is, everytime my daughter Yi comes back on holiday from Australia she'd pester me to teach her to cook. But she's never around when I'm in the kitchen so, Yi, this blog's for you.

Ming, my second child, is the easiest to feed and I think that's why he grew to 182cm by 17. That means he eats anything I cook without complain, including veggies. Good boy!

Now Wey, the youngest, was a skinny picky eater who'd throw up easily. To fatten him up, I had to make every meal special and it got to the point I had to vary dinners according to different cuisine. At 8, he suddenly discovered food, Korean pork belly bulgogi being his favorite. As he got off the car in the morning, he'd ask "What's for dinner?" and when I picked him up, he'll say "Hunger, hunger!" prompting me to drive fast to find food for him. My problem now is he's got extremely sharp senses of taste and smell, and he's overweight.

Delifrance opened in Kota Kinabalu this week (yeah, yeah I hear snickers) and my son Ming and I decided to check it out last night. Boy, if Secret Recipe was crappy (fluffy, tasteless cakes and bowls so big with so little food in it I thought someone must've gotten to it before I did) then stay away from Delifrance!! 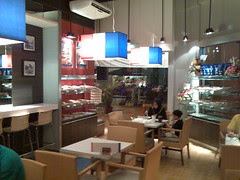 Ming had smoked salmon on ciabatta, the latter served cold so we asked that it be heated. It came back THOROUGHLY heated thru, the measly slice (never trust the photos) of smoked salmon now a solid pale pink and the lettuce wilted and soggy. No butter or mayo or spread of any kind detected. And the ciabatta was dry and old. 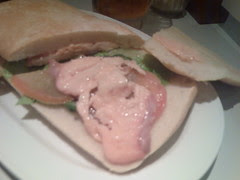 His sandwich came with chicken soup, which definately tasted like reconstituted packet soup, and it was weirdly sour too. The two slices of garlic bread were chewy (instead of crusty) and kinda rolled up, as if it was ashamed of the tasteless spread that was on it.


My spaghetti vongole was only slightly more edible, although it serves me right to order that dish in a French diner-type of restaurant. Its the first time I've eaten such a soupy pasta; kinda like soup noodles... 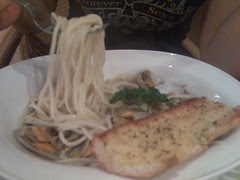 
P.S. While I'm at it, it's a good thing they give small servings at Secret Recipe, because the Tom Yum noodles were hardly yum. If you have to eat there, I'd recommend the lamb shank only.
Posted by Terri @ A Daily Obsession at 9:40 PM 6 Hungry Comments