This is one restaurant almost everybody in KK knows. Located at Wisma Mellinia near the Lintas Highway to the KKIA, this restaurant used to be the only place for a decent bowl of tomyam noodles. In fact, when they were in their former place, there were queues all the time. Now the crowd seems to have dropped and I think I know why.

Unless it was a culinary aberration, the tomyam soup now is very different. Whereas it used to be spicy with chilies, lemon grass and lengkuas, now all I could taste was chili, milk and vinegar. On top of that the prawns tasted bad last week. The fish head sour veg meefun was also inedible because the fish was so fishy. Aiya.

If you do venture there, do try their crunchy chicken feet salad which everybody else was having. Another favorite is the razor clams in black soy beans. I've had their dry-fried noodles before and it was good, though now I'm not sure. Good luck! (5.5/10 rating just in case it was an aberration). 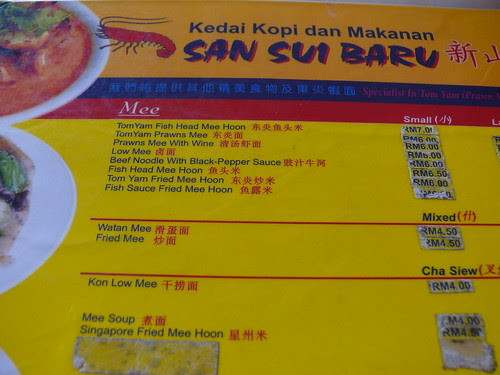 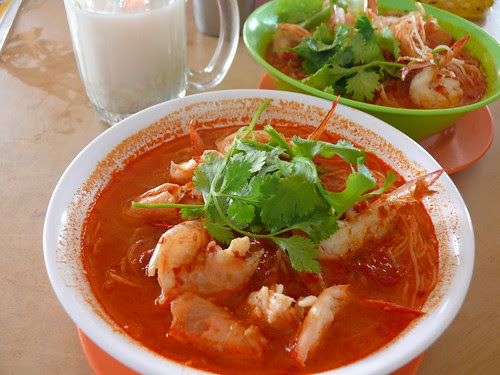 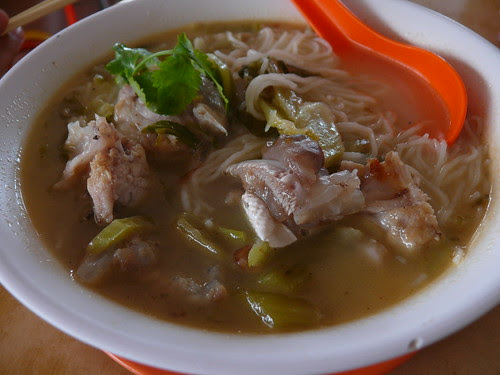 Fish head noodles
Posted by Terri @ A Daily Obsession at 9:01 AM

Ah I always thought the place was overrated, before and after they moved. It's a regular place for my family to go to before leaving on a jet plane.

I totally agree with you about the tom yam. Our family was there about half a year ago and we never went back ever since. Does any one know where we can get a decent bowl of tom yam noodles?

Greetings :-)!..went to San Sui with a friend last thursday as we were dying for Tom Yam. Our original plan was to go to Wan Wan (bundusan road- shophouse behind the Damai Club)but it was closed, as of most thursdays. Maybe you can give Wan Wan a try next time. I think it's the best in town (fresh fish and prawns) yumm! love the foody pix btw.