I've not been able to sit in front of the computer because I'm still rocking and giddy from the overnight deep-sea fishing trip we took last weekend. 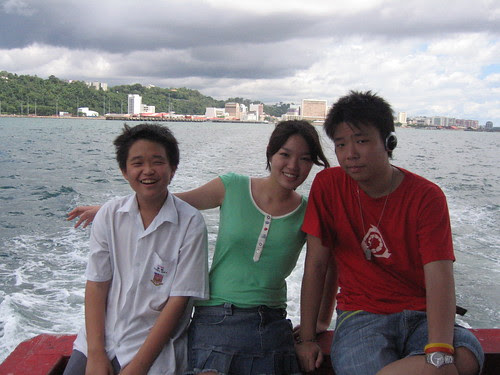 Setting out, with KK's skyline behind. Wey still in school uniform.

We were so lucky to meet Bernard who organized a fishing trip when he heard how Yi loved to fish. Bernard has a 70 feet boat so last Saturday at 2 pm, we left KK on a 3-hour journey to our destination 330 degrees northwest of Sabah. We've done night fishing, day-night fishing about an hour off KK but never deep-sea fishing overnight.

We arrived in the middle of the ocean, no land to be seen, at 5 pm. The sea was choppy but bearable. Wedge, with some help from Bernard, drew in the first catch (on our side of the boat), a little red grouper. Almost at the same time, Yi got a big pisangpisang. There's something about that girl--she always gets the first and the most fish whenever we go fishing. We aren't frequent fisher people so we only used hooks and lines, and we found it really hard to feel the bites because we were casting from 60 to 150 feet deep. 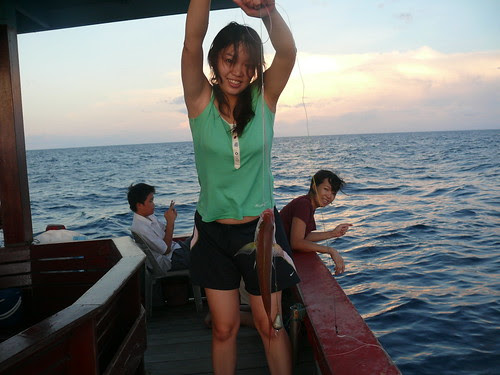 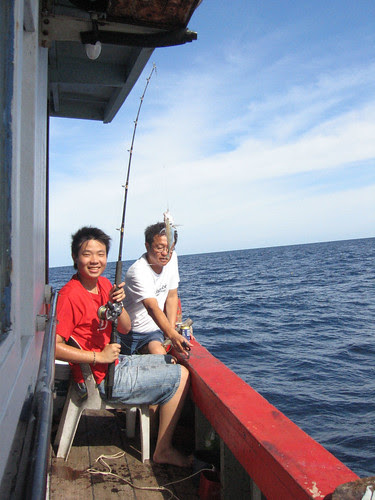 Around 8 pm, I shoved a mouthful of rice and fried fish into my mouth and immediately felt nauseous (lesson: never eat oily food or, better still, don't eat at all). Took a sea-sick pill and went straight to my bunk. The bunk was swaying left and right. The sea got rougher through the night, with rolling waves. I imagined myself in a large hammock. After a while, it didn't work because I wanted to get off the hammock. I thought of my friend KLK, who gets giddy even when I drive. To town. I thought: why did I come on this trip?? I thought of you all, safely on land, eating and drinking happily and I wished I was home watching that Prison Break Second Season, Part 2 VCD I had bought in Shenzhen. Oh, misery! 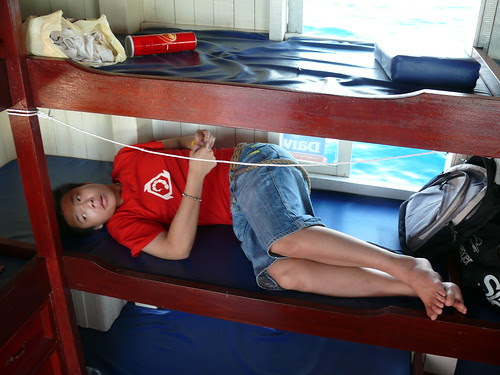 Expression of a person who's about to throw up. Only Hub and Wey did not get very sick.

Around mid-night, I got up because I couldn't sleep. Hub was still fishing, alongwith the two Filipino helpers. (It's great with them around. They help us hook the bait on, take the fish off, untangle the line...we just have to cast the line and wait!) I dropped a line in for the first time and within 5 min, caught a reasonably big 'fire dot' which is also called 'Moses Perch'. Or is it bream? Then within 10 min, a small barracuda! Hub also started hauling fishes in. It's interesting to know that at different times, you get different types of fish. We caught groupers, breams and perches in the afternoon, squid, barracuda and king mackeral (tenggiri) at night and white fish (in 150 feet waters) in the morning. 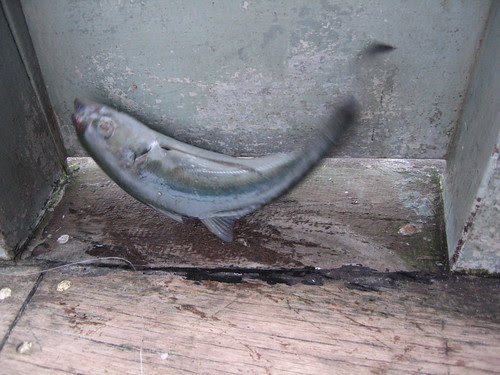 One of the Filipinos hauled in a huge king mackeral of about 6 kg! Several others also caught these giants. I wondered if we could be so lucky too (we were not). Suddenly I felt sick and threw up overboard...that was the end of my fishing. From then on, I just curled up in the bunk waiting for daylight. Daylight came, a glorious sunrise, but I was so weak and nauseous because the sea had gotten rougher and I wished I was home. Rolling waves are much harder to bear than choppy waves. And the sea looked black even in the day. Probably because we were now in very deep waters. Even Yi, who puked 3 times, gave up fishing because it takes quite a while to draw up your line when you cast it 150 feet deep! 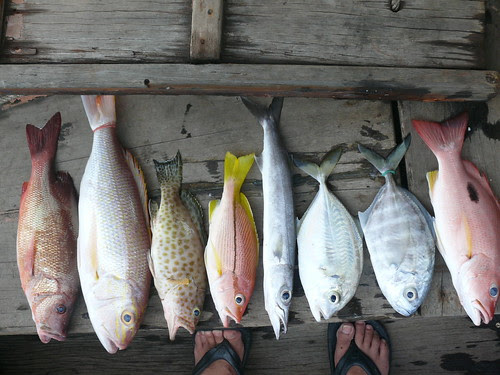 L to R: a special red snapper, 'silver thread', grouper, pisangpisang, baby barracuda, whitefish, trevally and 'fire dot', a kind of bream. Or is it perch?
That's part of our catch (except for the snapper). All-in we looted about one bucketful of fish, most of them caught by Yi. The other 10 guys? Their cooler boxes were full! 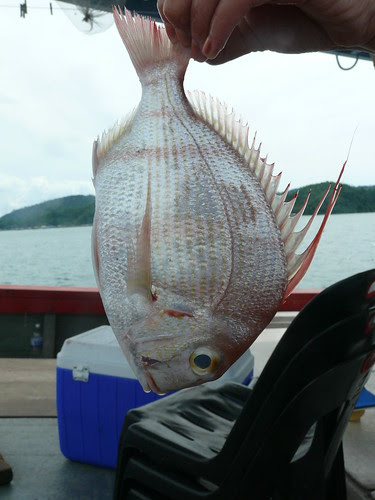 This little guy is called 'pingpong racket' because he's so round. Delicious steamed and sashimied, so do look out for him! 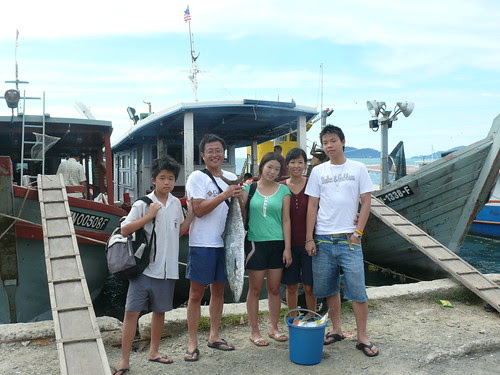 We survived the seasickness, the sun, the toilet and each others' stink (because we didn't shower or brush our teeth). I looked as sick as I felt.

Now that I've done it, I know I will NEVER EVER go deep-sea fishing again. NO WAY.
Posted by Terri @ A Daily Obsession at 9:31 AM

I went on a similar sounding trip at the beginning of last year - same type of boat too.
Good to see you guys caught a decent variety. All we caught, between 8 fully grown and highly competent adults, was a single mantis prawn I spotted as we were pulling away from the jetty area. That is all. No fish.

But the beers helped though :)

tt's d funniest comment so far! i just laughed so loud d dogs r barking. am sitting here looking at my girl do last minute work. she's going back Wed...we'll miss her so much...
u guys must all be amateurs. we had ppl with 30 yrs experience with us.n sonar equipmt.

Amateurs to the end :D But at least we didn't forget the beer.

i'm send my thesis to my supervisore in cyber-coffie now.

so, got chance to have a look to your blog.

my friend Yangmei said she can't visite your blog yesterday. dont know why. If she see your pictures should be very happy. i asked he try again.

i have to leave now !

it is the time to go back home !

Lily: when we were in China, we has limited access to d blogs too. maybe the gov controls tt? Yi has just left this morning...i'm lonely and sad.

wadde...good tt bulks up the no. of my comments

Deep Sea Fishing in Dubai was great experience of my life during Dubai trip .

fishing in dubai the best experience of my life ever. i will never forget it

My cousin loved going deep sea fishing when he was growing up. Now he has kept the tradition going with his kids. It is a whole different experience from regular fish. Also he would catch the biggest fish whenever he would go. http://www.gulfrebelcharters.com/trips.html

Great Post! Really enjoyed reading it, thank you for taking the time to share this. You should also try to go Fishing in Dubai with Go fishing Dubai , they are organising fishing trips in dubai

Lovely post, thank you so much for taking the time to share your knowledge and wisdom. You should try to go Fishing in Dubai with go fishing dubai they are organising big game fishing in dubai.

Lovely post, thank you so much for taking the time to share your knowledge and wisdom. You should try to go Fishing in Dubai with go fishing dubai they are organising big game fishing in dubai.

Great Post! Really enjoyed reading it, thank you for taking the time to share this. You should also try to go Fishing in Dubai with Go fishing Dubai , they are organising fishing trips in dubai

Let's face it! Dubai isn't the first name that pops into our thoughts when we think of Water Sports activities. With fantastic beaches, top-quality facilities, and water sports activities, Dubai water adventure is soon becoming the most popular water sports destination.

A Dubai excursion isn't full without deep-sea fishing. If you are a fan of water and the stunning sea views, you can increase your enjoyment by adding fishing. You can organize a deep-sea fishing trip in Dubai and you could take advantage of this to have a relaxing but exciting vacation.

It is a good article blog thank for sharing.