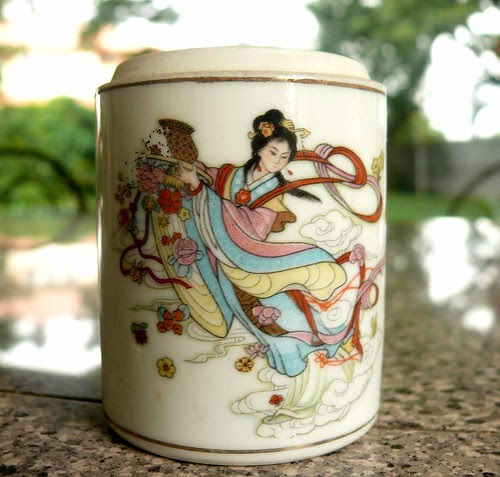 So who says the Chinese are not a romantic people? They actually have a day set aside just to appreciate the moon when it's at its brightest, biggest and roundest. Today is the Mid-Autumn Festival (let's just call it MAF). MAF is celebrated on the 15th day of the 8th Chinese calender month every year. In ancient and present-day China, tonight is a magical, romantic night for gazing at the moon (and each other).

MAF not only marked the season in ancient China, but also celebrated the harvest for that year. The moon, being at its brightest on MAF, is the object of attention on that night. When I was young I was told stories of a beautiful lady, a wood-cutter and a rabbit who all lived on the moon. And then the Americans landed on the moon in 1969 and overnight all the Chinese who believed in that story grew up. Later, I was told nobody has ever seen the other side of the moon, so maybe that's why nobody saw those three characters. The moon held a lot of mystique in those days and I remember pointing a shaking finger at the moon one night when I was about 7 or 8. Then I waited in secret fear and defiance for my ears to rot because that was what I was told would happen if anyone pointed at the moon. Yes, you can laugh but those were days before Hubble and computers. And so my ears didn't rot and I got bolder and maybe that's why I never believe in superstitions, and why it's impossible to sell me life insurance or health products.

My favorite mooncake story is the story of how China overthrew the Mongolians who had ruled it for over 100 years by putting messages into mooncakes, which the Mongolians avoid, telling all Han Chinese to rise up against the Mongolians on MAF. It's a true story. 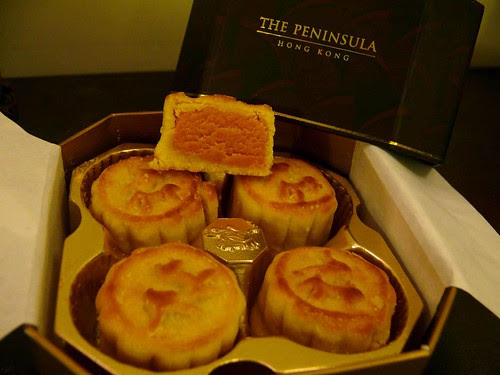 A westernized mooncake of sucre pastry with 100% salted duck's egg yolk filling. Nice but I prefer the traditional mooncakes.

My mom used to lay out mooncakes, pomeloes, peanuts, sweets and agar jelly she'd made herself on a long table in the communal yard we shared with other families. That was in Tanjung Aru, us in our wooden houses right next to the marbled palace of the Chief Minister (how's that for disparity and living in harmony). All the neighbours' kids would come, each with a colorful home-made lantern (in the shape of a star, or dog, or rabbit or flower) to my mom's 'appreciate the moon' party. They used to call Mom "The Hong Kong Woman," in respect and wonder at her origin and 'city' ways. I was so proud of my Mom and happy to be the host family for all the other families.

When my kids were younger, I did celebrate MAF yearly (upto 4 years ago when Yi left for Australia) with a walk around our neighborhood, me and my kids and their cousins all carrying lousy store-bought lanterns (I made sure the lights weren't battery operated), and people would stare from their houses when their dogs barked at us. Then we'd go home and eat mooncake and sip tea on the patio with Mom, and my siblings if they visit, just in case we get a glimpse of the moon. So what's my point. I guess I'm lamenting the loss of the old ways and I'm hoping my kids will remember MAF, and how they celebrated it as a family because what most families do now on MAF is eat a big reunion dinner, watch TV and never once look at the moon. Me, I still sip tea and eat mooncakes and gaze at the moon and occasionally into my Hub's eyes. 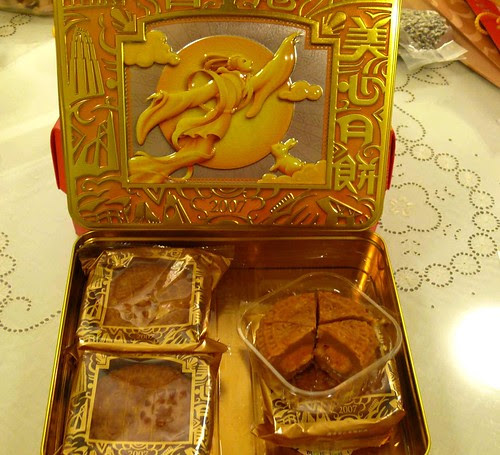 My favorite mooncake filling is the lotus seed paste with twin yolks. I used to cut mooncakes horizontally, which incensed my mom, so I can get at the whole salted egg yolk. These days there are mooncakes with 3 yolks so no matter how you cut it, you'd get lots of yolk.
Posted by Terri @ A Daily Obsession at 8:22 AM

Lately the folks are saying some YOLkS are artificial one from China! I m sure you heard of it. Anyhow, I still eat my mooncake with yolks! HAhahahhaa, I will pick the quarter with more yolk somemore =p

yes i've heard tt but i like to think i'm eating d real thing. actually mooncakes r really bad, loaded with sugar, fat and cholesterol.good thing they're only available once a year.

We're just celebrating MAF 2 nite But it's already morning in KK. D family's been sampling moon cakes all week(not me). D moon had just gotten high enough 4 me to see right out of my window. It's looking very bright. It's been so hot & humid infact thunder storm was in the forcast...but we'll get a wet morning 2morrow I'll bet. Great posting on MAF!

u celebrate MAF, how wonderful!i love it when ppl teach their kids to appreciate their culture n roots...d moon was not so big or round last night.it's prob bigger in Canada?? i read somewhere tt 16th, not 15th is when d moon is at its best.n hey, thanks!

Duh, as if there were no mooncakes in winterpeg. I totally do not recall ever doing that! Musta cost a bundle, but well worth it when it's still being appreciated even now. Thks ! We continue the celebration w/ a MAF gala dinner & dance + entertaiment for the kids 2morrow nite. It's orgainzed by a few families & friends who are really into live music performances.... Cha, cha, cha!

mike: sounds fun!send me some pics.