And he took bread, gave thanks and broke it, and gave it to them, saying, "This is my body given for you; do this in remembrance of me." Luke 22:19 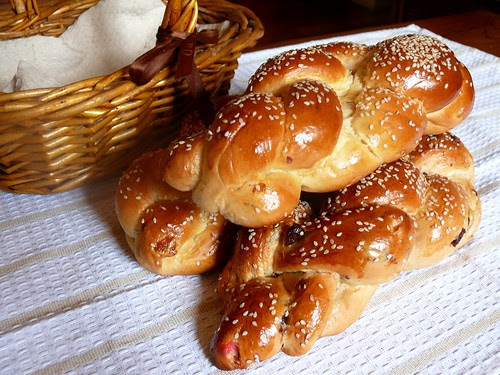 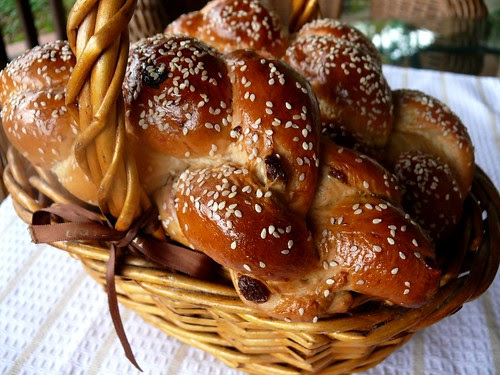 Jesus predicted his own death, and willingly went through his suffering instead of performing a miracle to save his own life. He had done so because he was obedient to God's plans, that his death would be his sacrifice as a form of punishment for the sins of man. It is like you have committed a crime (as we all are sinners) and have been sentenced but someone else who loves you came and said he would take the punishment for you so that you may start all over again, free. Jesus' message over and over again was a message of love. He said the greatest commandment is to love God, the second to "love your neighbors as yourself."

Good Friday is good because while Jesus died a horrific death, his sacrifice is a proof of hope and his love for us. And when he rose again three days later, it was a fufillment of his prophecy that he would rise again. Which prophet or founder of other great religions claimed that link to diety? They have all remained dead. Proof of Jesus' resurrection: the massive stone that covered the opening of his tomb was rolled away despite the presence of Roman guards. His tomb is still there, maintained beautifully. Another: All his disciples (except John) ran away and forsook him during his cruxification. Yet after Jesus' death, why did they start preaching, travelling to faraway lands, willingly enduring persecution until one by one they were all tortured to death? The answer is that all their disbelief and fear went away when they witnessed Jesus as he appeared again to them after his death. He is resurrected as he said he would be. 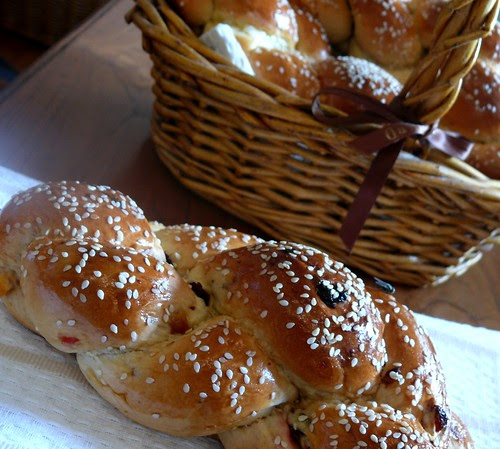 Every Friday at sundown, the Jews would get together in their homes for their Shabbat (Shabbath) meal. All activities would cease; it is a day of total rest. The streets would be empty. The Sabbath lasts until Saturday sundown. The challah, a braided bread, would be broken and eaten. This bread for the Jews remind them of the unleavened bread they ate hastily the night they ran away from Egypt and of the manna bread God had provided for them daily ("Give us this day our daily bread...") while they were in exile for 40 years in the desert after they escaped from Egypt. 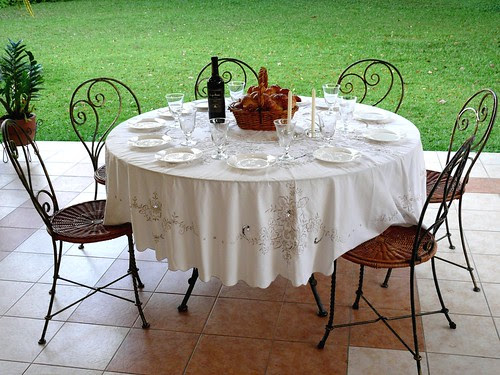 We had a Shabbat meal this Good Friday, with challah from the Magellan Sutera Hotel. For Christians, the breaking of the bread symbolises Jesus' body being broken which was as predicted by him during the last supper he had with his followers. The wine symbolises his blood which was sacrificed to clean away our sins, while the two candles (lit by the female of the house; me) symbolises Jesus being 'the light of the world'.
Posted by Terri @ A Daily Obsession at 10:00 AM

a. ur bread of cuz, beautiful twist & nicely baked.

Wait a minute, at a lost here. Those challah were from Magellan Sutera or you baked it? The last pic...your place or the hotel? But one word for sure.....BEAUTIFUL!

denise: a. was yummy too
b. yes, i love the tablecloth which my friend Betty Ang gave to me for my hse warming a long time ago.
c. wah, did u use magnifying glass? if u could look closer, the fatt choi plant produced 3 anthurium-like(bottom right) flowers recently. i was surprised bc i've never seen them b4.

preciousp: hey, i missed u lah! how many kgs did u pack on?! the challah's frm Magellan, the last pic taken in my patio/alfresco just b4 sundown. frm where i stood to take the pic is my outdoor peninsula next to an outdoor kitchen, like those Oz barbie areas. tt's where i usually take my pics bc indoors's too dark (by the time i get up :))

Very sharp pictures of challah; I can almost smell it and wish I can have a bite of it.

Also a good Easter Message to remind us the depth of God's love for us so that we will never be seperated from Him.

Will see you tomorrow in Skyline.

The bread is absolutely beautiful!! I need to learn how to make proper breads too! I tried to avoid bread recipes before because a lot of them took a long time. All the kneading and waiting for the dough to rise, but I think I should give it another go soon!

ma....how much you bought for the Challah? It must be delicious..and i like your patio..it's so beautiful..still got 3 weeks to go back to KK :)

thank you for writing this post for it encourages my heart...and i pray God will use this post to touch other hearts as well..

hope you had a great celebration of the Risen King!!

Love your table cloth, so classy and elegant. Where did you get it?

Hehe..how many kilos? This time the weight goes to my body instead of my luggages. You will know what i mean later.

I like the story behind this. A good read rounded off with a significant meal :)

hungry hamster: bread was the only thing i couldn't make up until 4 years ago. one night, in desperation, i threw the dough into my Kenwood Major and the bread turned out excellent. so unless you can knead well, use a mixer, make sure the yeast is active n let the dough proof n u'll get wonderful bread, n lots of satisfaction.

ekeng: our church Skyline provided the bread. oh dear, i must loose some weight by then!

trishie: it encourages me tt u r encouraged :)

preciousp: it's a present n it i love it too. we'll compare love handles...