If you read this post earlier, it was titled 'Longan Eyes'. I've changed it because I just went through 1/2 kg longans and they were all black-brown, not a single was black. For those who don't know, The Grudge was one of those Korean horror flicks that makes you want to live in a commune so you'll never be alone. I've never watched a single horror movie since 'The Exorcist' and 'The Shining'. How can I when I jump at my own reflection after I've washed off my make-up.

I recently met my very uptodate friend and as I looked at her, I saw Grudge eyes. Really, they were a solid shiny black and then what struck me next was that they were very BIG, covering more of her whites than I've ever seen on anyone. The giveaway was she used to have dark-brown eyes like all Orientals do. Now they are a weird impenetrable onyx black. So I made a couple of checks and this is what I found:

Look at that. Her eye is much much bigger with the lens but in a scary The Grudge sort of way. They look big but dead. I might not like it, but that's the look the girls want. Not just big but big solid black. 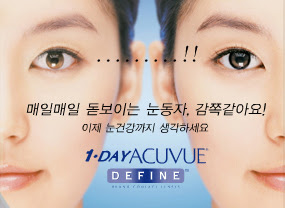 Her augmented irises (right) are more natural.
These lenses, available more than 4 years ago, were invented by the Japanese (who else? Inventors of all things unnatural) because Jap, Koreans and most Asians girls all want to look like anime (Jap cartoon mags) heroines: saucer-sized black shiny eyes, teeny-weeny peapod mouths and non-existent noses. Think Dawn Yang without her nose and strange-looking mouth. I read that while Orientals want bigger eyes (and that's the feature most often surgically improved for them in a procedure called blepharoplasty), causcasians have problems with big too-prominent noses and rhinoplasty is the No. 1 cosmetic surgery procedure for them. Look at the western actresses and cover girls. The smaller the noses the better it seems. For guys, big noses are more acceptable except for the Karl Malden type. Tom Cruise didn't do so badly despite his Great Wall Nose. I've always wanted to know--if Tom closes one eye, will he have 150 degrees vision like I do, or will it be 90 degrees?? But the topic is on eyes you remind me. Okay, okay.

Some of you probably already are wearing anime contacts now. That's okay. Just make sure you don't give me that chin-down-wide-eyes-pursedmouth-peacesign-and-knockknees look if I see you. Especially if you are over 16 years old.
p.s. this will still be a food blog - I just failed to get good pics last night so I'm going to cook something earlier today before the sun goes down. Can anyone tell me if they use studio lights for their food pics, and what brand and how to use it? Meanwhile, a filler. We need to relax before March 8.
Posted by Terri @ A Daily Obsession at 10:20 AM

Wow..that's something I didn't know. Thanks for the info. Now we can all look like anime characters, well almost...

I lol'ed when I read this entry ;)

mahmee,
can u call my landline when u get this? i'm totally outta credit :(

yewww...at first,i think it's cute..cos can make the girl look like a doll..but now, it freaking me out..especially on midnight.

You know, toys, dolls, animation, video games, body parts are getting more & more realistic but humans are just going the opposite direction. I guess it's nature's way of meeting the two together. Pretty soon, technology will get to the point where a human is indifferentiable from an android. Then everyone can really look like an anime. Then the aliens would decide to land because that would be the right time - when society can accept other beings who doesn't look like humans. Why do you think they've been hiding from us all this while?

I also going to get some light to take my bakings, do let me know of your findings!

junkgirl: as long as i don't run into u in some dark alley...

daughter: don't u get paid??

ekeng:ur remark freaked me out too. i was working on my blog around midnite n a cool wind blew in n gave me goose bumps. as it was shutting down, the wallpaper was some spooky game n i ran upstairs like mad!

Don't think the lends will make much difference to my very fine eyes. My mum always said when i smile, my eye as thin as a thread, can't see. SNIFF SNIFF SNIFF!

shan: sorry, i'm scared myself too!

preciousp: :D i don't think the lenses will fit into my eyes too, i already have problem fitting in ordinary lenses. need to peel back my eyelid b4 they can go in lol!