I asked B and her family out for lunch yesterday and since her mom was visiting from KL, I wanted to take them some place they have not been to. I'd only eaten at Dong Fung (name to be confirmed) once before. The Inanam/Kolombong area is not my usual haunt and I find the roads there pretty complicated. Because I had the impression that Dong Fung is near a Shell station, I spent 45 minutes going round and round (with B and family in the car following me) until I gave up and called a friend. It turned out that Dong Fung is opposite from Boon Siew, the Honda dealer, and just before the Shell station which is before Chiu Thai Seng's store. You turn in just before the Shell station and directly in front of you in the distance is Dong Fung, a corner shop. It is NOT before the Shell station near the 2 1/2 Mile traffic lights, remember that.

Many people complain that Dong Fung is expensive for a coffeeshop. Yes, it is, but it also isn't if you compare it to coffeeshops that serve similar seafood noodles and dishes. My only complain is that as in most coffeeshops here, the place was littered with used tissues, something that kills my appetite. I have to learn to be blind to the floor conditions. My vote for the best coffeeshop in terms of cleanliness would have to be Apiwon in Luyang. Every coffeshop should strive to be like Apiwon. If I was the health authorities, I would close down 95% of the coffeeshops here. Used tissues, dirty wet floors, dirty black mops in plain view, waitresses who wipe the leftovers onto the floor (woe to the waitress who does that because I would tell her off), customers and operators who spit right outside the shops, urgh!! (is this an invitation for anon to tell me to migrate?? Well, I want to see him/her defend KK's dirty restaurants. This is 2008 and we are dirtier than in 1978.)

Right, let's get on with the food. I think this is one of the better seafood noodles restaurant. I can't call it the best because I still need to check out the one behind King's Hotel in Bandaran Berjaya. Until then, this place is worth the drive. 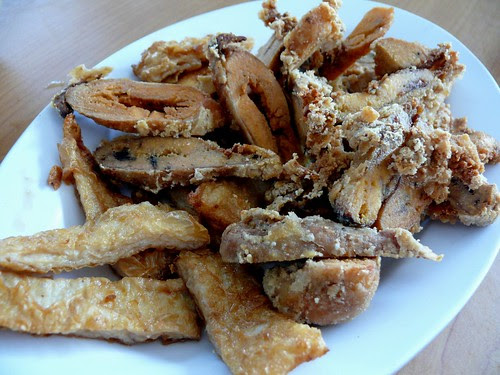 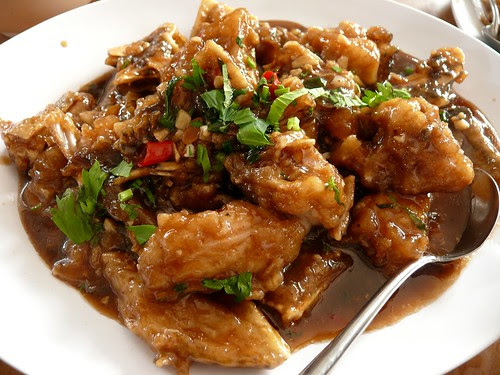 Fish head and belly fried in soy sauce is one of the top orders here, so don't miss this. 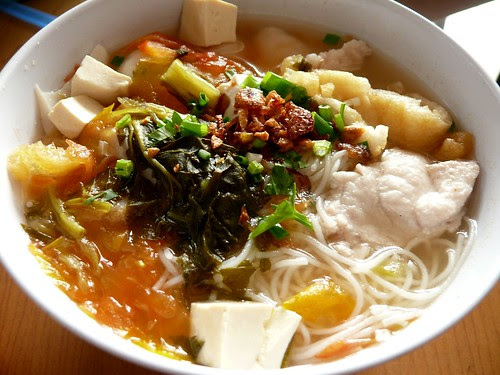 Mifen soup with mixture of fish things which you chose: fish maw, fishballs, fish paste etc. The fish slices on my previous visit were very smooth, fresh and tasty but this time around, the fish slices were hard and coarse. I wonder if we have to specify what fish we want. 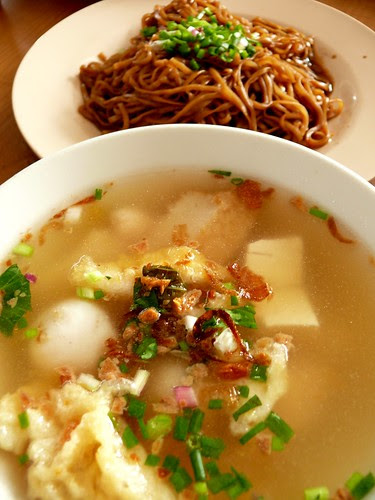 You can also have your fish soup separate from the noodles. The gonlao/soysauce-tossed noodles were simple and not oily as they usually are in most places. However, they were more sugar-sweet than what I'm used to. 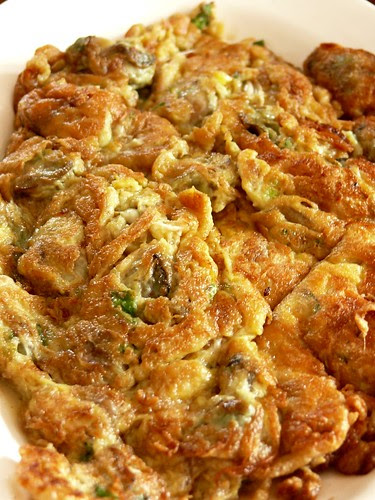 Baby oysters omelette. This is a dish I equate with West Malaysian hawker stalls and it is not easy to find it here. There were lots of oysters but although I liked this, I felt the oysters could be umami-sweeter. 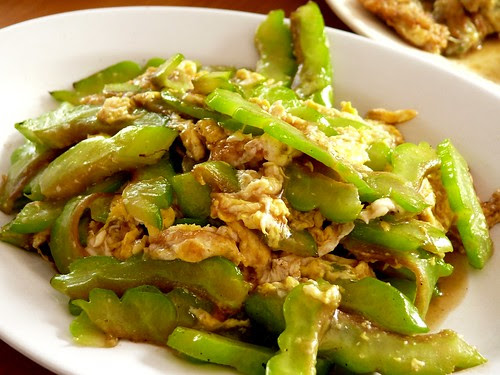 I like bittergourd any which way, esp. if they are very green & bitter & not overcooked which is how they did this dish. However, I found this dish rather oily although I'm not very sure if it was oil or sauce, so well-blended was it.

The total cost of this meal, including drinks, was about RM94/US$29 for 5 grown-ups which is pretty reasonable these days.
Posted by Terri @ A Daily Obsession at 2:42 PM

Terri, will u take me go makan when i go back to kk in june? :D

YUM...i love bittergourd. Coincidentally, I made the bittergourd & omelette dish yesterday - but i added slices of garlic and ikan bilis. Mmmm...will make this again tomorrow as I still have some bitter gourd left from last nite.

I went to NRG late last year, but my sister didn't enjoy the food there. She said the cha siu bao was overdone and the bbq pork was nasty. I personally have no comment about that place. I do always end up going to Sharksfin House in the city coz it's convenient, has good variety and doesn't disappoint on quality. Other dim sum places I think are almost as good are Westlake (on little bourke st) and Plume (at Highpoint). Have u tried these places? However, the talk of the town is golden dragon has the best dimsum in Melbourne.

Terri, I'm impressed by the details that you had picked up and the wonderful photos of the food captured while we were busy gobbling down the food without noticing all these fine details. :) we had a wonderful time esp my mom. thanks so much! for me who's not used to having any/much salt in my food, gulped a lot of water after that, but will definitely visit the place again once in a while.

Inanam is out of the way for lunch for me, but I think I can wrangle it some time to check it out.

The fish head and belly fried with dark soy sauce looks tempting!! So is the fried fish roe. So is this place easy to find??

I never know Lee Wong Kee served fried fish roe. My family always ordered their deep fried wontons and the beancurd skin only. Too bad they are getting pricey and the chlorine smell from the water is strong!!!

Hi Terri,This is the first time I visit ur blog - nice pictures and layout. Btw, I'm planing to visit KK this year, any good place to go and good place to eat? Appreciate your recommendation. TQ!

moodie: sure i will! where would u like to go?

Golden Dragon? never heard of tt one. i wonder if yi knows.

b: u r very welcome. tell ur mom to visit again soon :)

agnes: it's easy if u just rmber it's the turning just before the shell station opposite frm Honda..lee wong kee's beancurd skin with fish paste is the best but there's quite a bit of msg n oil. i agree with u on the soup.

lim kitchen: hi, a warm welcome to u! i don't think there are many good 'proper' aircon restaurants here but we do have coffeeshops tt offer good noodles. do go to my restaurant reviews n come back to me if u need any clarifications.