Every end of May, rice harvest time is celebrated here. Called Kaamatan, the celebration lasts several days, in rural places, several weeks. I did a post on the celebrations last year and another on the best-known dish of the Kadazans, the largest indigeneous group in Sabah, and am reposting them here. It is a long weekend for us (not in other Malaysian state though) and my kitchen's closed because Hub and Wey have gone to Karambunai Resort for church camp while I'm holed up here with Ming who's still in the middle of his A Levels exam. 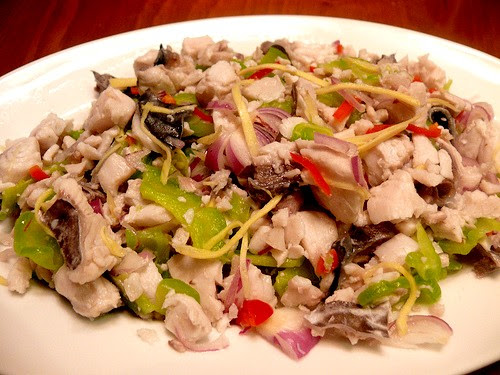 Hinava is a delicious, tangy, appetite-provoking raw fish salad. I've over-cooked the fish. It should just be blanched outside, either by boiling water or by lime juice, and still raw inside.

This is a probably the most famous dish of the Kadazans, the largest indigeneous group in Sabah. I've never made it until tonight and it turned out great! It's so easy to make too. Years ago when I was working in a bank, a hinava competition was held during the Kaamatan Festival (rice harvest festival) and I can't remember whether Dolly or Francesca's entry won but I took down both recipes so one of them mustn't been the winning entry, the other my pick. I've combined the two and given the credit to both.

1. There are 3 ways to prepare the fish:
a) Pour boiling water over fish in a bowl and drain well. Probably the best way but not the traditional way.
b) Put fish into a pot of boiling water for a few seconds and drain well. I did this tonight and the fish turned out a little coarse because it was cooked through and it broke up easily. Some people serve hinava mashed up. Yuks.
c) This is probably the most authentic way: steep the fish in the lime juice for 10 minutes. However, you'll need lots of lime juice. The citric acid will 'cook' the fish on the outside but leave the inside raw, giving it a smoother texture and a slightly chewier bite. I like this but will only attempt this with an absolutely fresh fish. Hubby will have to go fishing...
2. Wash the salted bittergourd twice with plenty of water to remove the bitterness and some of the salt. It should still taste slightly bitter and saltish.
3. Mix the fish with the lime juice and leave 10 minutes.
4. Mix everything together (using hands so the fish doesn't flake too much) and add more salt and lime juice to your liking. If you run out of lime juice by now, use rice or sushi vinegar.
5. Chill in fridge till ready to eat.

Note:This may be an acquired-taste dish. Ming loves it but Wey wouldn't touch it.This is like a raw fish salad so it goes with something stronger, like a curry or something deep-fried. You'll find this dish even in 5-stars hotels here this time of the year because the Kaamatan is celebrated end of May. You won't be able to get the bambangan (a brown-colored fruit that looks like the mango inside but is very fibrous and pungent) anywhere but here and omitting it is okay too for people who won't taste the difference (like me). I find that traditionally hinava is always made in a fish:bittergourd ratio of 90:10. However, we like it about 70:30 so its really up to you. In the pic above, I took away some of the veg to make it more authentic-looking.
Posted by Terri @ A Daily Obsession at 10:20 AM

Wow...what an exciting time u had. It's a pity that all my life in Sabah, I've never really experienced this rice harvest festival. :(

Anyway, the fish dish sounds pretty easy to do, so hopefully I can make it once I find some king mackarel fillet here (are there any possible substitutes?)

P.S. I will be going back in about 3 weeks time, so I will keep u posted about meeting up? I hope u don't feel awkward about it...coz I kinda do (haha) but it will be interesting...

I love Hinava! Thanks for the recipe and of course, the ever so scrumptious picture!

Interesting! The Hivana sounded tasty. Must visit KK during this time of the year next time.

moodie: aiya...try joining the festival celebrations at least once. white fish with firm meat shd be fine but i really don't know what's safe to eat raw. ask ur fishmonger, or use sashimi-grade salmon??

lilyannette: will u be cooking it? tell me how it turned out, n what fish u used. the pic was taken a year ago with my little canon. ur pics r always beautiful. hey, i'm linking u--u frm sabah??

moodie: yes, do call me..i've met other bloggers b4 n got on well so i am looking forward to meeting u :) what's ur email? mine's kwng08@yahoo.com

Terri... yes I am from Sabah, the Land of Over-development! I miss the old Sabah and hopefully the next time I come back, old traditions like Kaamatan Festival and the nice beaches are still around!

heay cool this is like our local umai dish, i posted last year under asian seafood. we used assam payak which is the ultimate acid. umai is our local melanau dish.

so interesting...how the local people in the sabah sarawak can have almost the same dish.