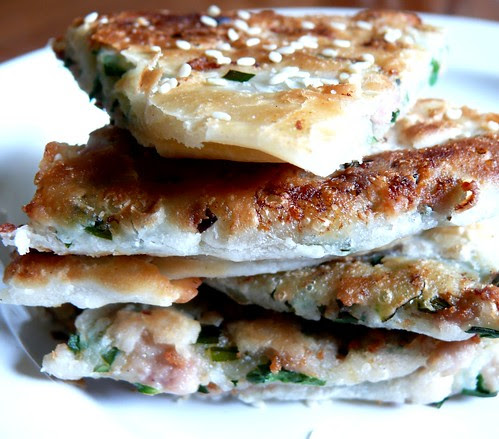 The first scallions pancakes I ate were my Shanghainese MIL's. Her scallions pancakes were the old-fashioned type, flat and pan-fried instead of the puffed and deep-fried ones which seem more popular these days. Again, because of that first impression thing, I prefer my scallions pancakes the traditional way which gives a crispy outside, slightly soft inside whereas the deep-fried pancakes are very crisp and 'short'/crumbly. Delicious but extremely oily. MIL thinks that the restaurants make better scallions pancakes because they use lard which gives a heavenly flavor and taste besides making the pancake 'short'. Restaurants also use a generous sprinkle of msg. The key to a flaky and 'short' pancake is to add shortening (preferably lard) to the dough, smear a layer of oil on the pancake and--this ingenuous Chinese way of making flaky pastry--roll the pancake up swiss roll-style, then coil it. This method results in many layers of pastry separated by a thin layer of oil, much like how you make puff pastry, except this method is easier. 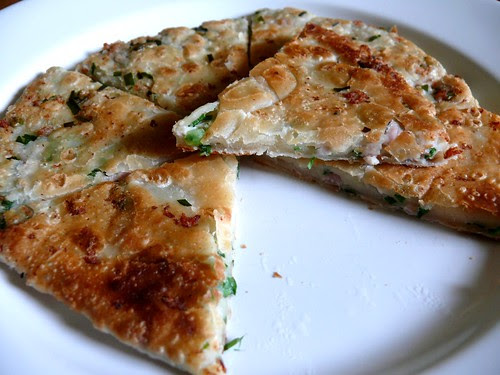 * You can omit this if you are health-conscious. The resulting pancake will not have a 'short' or crumbly texture. Instead it will be slightly chewy so you'd have to roll it out into real thin pancakes.

1. Sift the flour into a bowl and add all the boiling water at once. Use a fork to mix quickly. You may need to add 2 or more tablespoons of boiling water. The flour will form 'bouncy' lumps that look slightly traslucent. , Mix in the lard or shortening. Take the dough out and knead until a smooth and very soft dough is formed. Cover dough with a cloth and let it rest for 20 minutes. 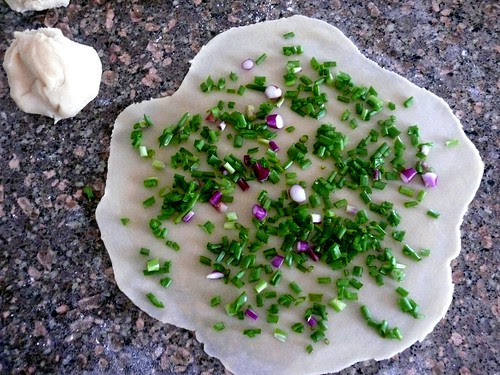 Plain scallions pancake. Here I've put too much onions on; the pancake'll burst when it is flattened. 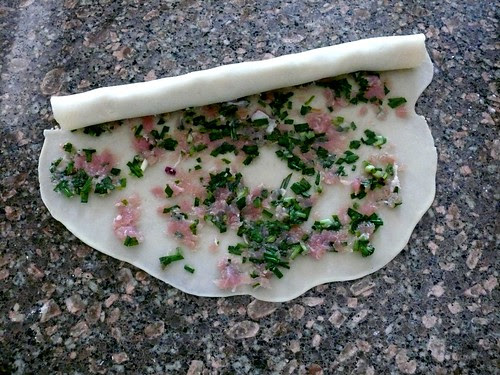 Chinese chives-pork mince pancake
2. Divide the dough into 4. Take 1 piece, cover the 3 other pieces with a teacloth. Slightly flour the working surface and a rolling pin and your hands. Roll the dough into a very thin circle. Splash some sesame oil on the circle of dough and smear evenly. Sprinkle 1/4 cup of scallions all over evenly, then sprinkle with a good pinch of salt (and msg if like). Now roll up like a swiss roll, then coil it into a tight circle, pressing the end into the side of the circle. 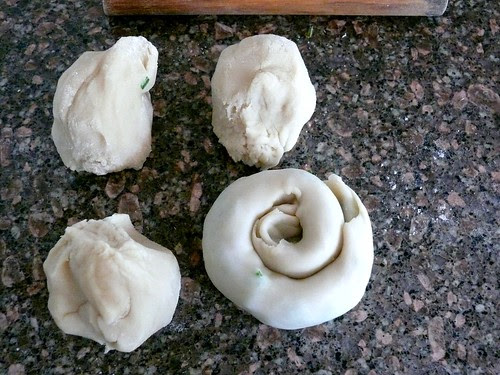 The coiled pancake (bottom right) can be deep-fried or, more traditionally, flattened into a very thin pancake and pan-fried in a little bit of oil.
3. If you like, you can deep-fry the unflattened coiled circle which is what most restaurants are doing these days. If you want to pan-fry instead of deep-fry, then you should flatten your pancakes so that they can cook readily in little oil. Just flour the top of the coiled circle of dough and flatten it out with your rolling pin into a big thin circle without breaking the skin. Put about 2 T oil into a flat frying pan and fry the pancake on one side in medium heat until it is brown (about 3 min), then turn over and fry the other side. Repeat with remaining dough.

4. Pancakes are served hot, cut into wedges. You can serve them with a black vinegar-soy sauce dip if like.

note: the thinner the pancakes, the crispier they will be.
Posted by Terri @ A Daily Obsession at 2:56 PM

WOW!!!! Looks really good and wish I could taste it NOW! I will try to make this as it seems pretty easy. Can I use leek instead?

Looks really well done - this is new to me. thanks for the new receipe.

It somehow reminds me of khuushuur
a popular Mongolian dish..Usually mutton is used but I may have eaten some with marmot meat filling(big rodents part of the squirrel family according to Wikipedia).

The khuushuurs tasted sooo good esp when one is in the middle of nowhere for weeks and having to eat army rations, surfboards and baked beans for daily meals!

pp: oh yes, u can use leeks or any other veg such as wongbok.

ekeng: korean pancakes r even easier to make. hurry, get a gf who cooks!

b:i wikied n i'm worried tt u may have eaten the muskrat instead of the marmot! kidding. but yuks, i'd rather starve than eat rodents!

i just can't see u, of all ppl, camping out in mongolia.*bows* an amazing feat! what did u do for water, n toilet amenities?!

b: hey, i just went to tt website u gave n the mongolian 'pies' look good. shall we cook tt one day??

okok! great idea...when its less hectic for you... I remember adding cooked rice to the filling the way my Mongolian friends taught me..... but cannot remember...we'll use mutton, beef or chicken etc ok? No muskrat, No marmots..

I'm fascinated by Kimbabs at the moment after my friend from out of town introduced to me (half with kimchi, half without) - I get my supply from the Korean stall at Grace Point at Sembulan (RM2 off during weekends). have you made them before?

We depended on the river quite a lot for water (even bathing). In the dessert, we would walk from well to well to get water. Each person will have the chance to use the map to navigate and lead the group to wells. On the day I was on duty,,, we took quite a looong time ... We couldn't take any proper baths for the 3 weeks - but since everybody smelt the same it wasn't that bad...

For toilet amenities, we'll dig our own toilet holes... the longer we stayed at one spot, the bigger the pit-hole. We used plastic sheets as our walls but open doors -- with the best toilet view in the world - mountains and open grasslands... We'll put two planks over the pit and that's our squatting toilet (better not fall)! Of course we get to see all sorts of colours and shapes of things that get in there..... better stop here - this is a food blog!