I was reading that copy of Newsweek with Obama on the cover last month and it struck me that Obama's half-sister Maya's surname (last name) is Soetoro-Ng. Immediately I suspected she was married to somebody from either Hong Kong, Singapore or Malaysia because 'Ng' (and 'Goh' and 'Ang', to confuse you further) is the other version of 'Wu' or 'Woo' in China and other places.

Then I found out that Maya's MIL (click onto the link on Sabah in my last para; her MIL's quite a looker) was from Kudat, and FIL from Sandakan, Sabah. No kidding how small the world is! Her husband, Dr Konrad Ng, an assistant professor in media arts in The University of Hawaii, was born in Canada where his parents Howard and Joan had migrated to.

Based on the 6 Degrees of Separation , every body on earth is just 6 steps away from the person they want to meet. Kind of like the 6 Degrees of Kevin Bacon for movie people. Now I think I can make it in 5 steps to meet the would-be (like every citizen of both friendly and unfriendly countries of the world, I hope he wins. America needs a president that the whole world can trust and like) President of the USA. I imagine it like this: Obama-Maya-Konrad-Joan/Howard-Konrad's parents' friend-me. Actually it's just 4 steps if Konrad goes directly to his BIL, 3 if his parents call Obama directly but I doubt they'd do that. Why me? Well, for one I'm Sabahan. Not good enough? Well, I'm Ng too, and all Ngs are related. They can't deny this relative! Just kidding. I thought you were having a slow day and need a celebrity gossip post.

Looking handsome on his wedding day, 2003. 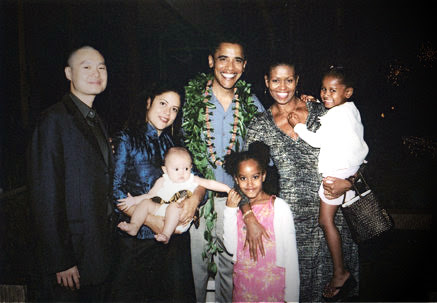 Looking like a certain pastor in Melbourne who probably wanted to look like a sex symbol. Or a shaolin master. Or do all bald Chinese look alike?

Btw, I hate how my surname is pronounced in English. I'd rather it be in Chinese, 'Wu' like my relatives in China. At Uni, the lecturers called me 'Ning', "Neg" and some sounded like they were being strangled; those Canadians just couldn't pronounce anything without a vowel. But the Australians, they are good. They say it perfectly, too perfectly, like they do it all the time. Because they do--parents here tell their kids to "ng ng", a word that refers to the sound many people make doing their potty business. And Ng is a negator. One of my HK friends told me, in between hysterical laughter, that she knew a guy called "Yuk Teck". His full name was "Ng Yuk Teck", sounding like "cannot move". Don't name your daughter "Mei Lei" or your son "Chung Ming" if your surname is Ng. Somebody should tell Maya.

They even dug into the origin of the Ng surname because of the link to Obama, here :" On to Ng, a common name among Southeast Asians who descend from Hokkien- and Hakka-speaking migrants from the southern Chinese province of Fujian. It's pronounced [ŋ], but very often it is said as [εŋ] ("eng") by Westerners who might have difficulty with a syllabic velar nasal. The spelling is sometimes romanized to match the Western pronunciation as Eng (or occasionally with another initial vowel, as Ang, Ing, Ong, or Ung). Wikipedia explains that Ng is "a Cantonese and Hakka transliteration of the Chinese surnames 吳/吴 (Pinyin: Wú) and 伍 (Pinyin: Wǔ), and Hokkien (Taiwanese) and Teochew transliteration of the Chinese surname 黃/黄 (Pinyin: Huáng)." Konrad Ng's parents are from Sabah on the Malaysian portion of Borneo, so in this case Ng likely represents a Hakka transliteration. (According to Nicole Constable's Guest People: Hakka Identity in China and Abroad, 57 percent of Sabah's ethnic Chinese population is Hakka.))"

p.s. the Indonesians can meet Obama in even less steps. His sister's father is Indonesian.
Posted by Terri @ A Daily Obsession at 2:05 PM

Haha..yes..we always made fun of the "NG" surname, so many nice names that we can use, especially good properous type.

Hahaha, so ur surname is "wu" while mine is "hu". That being said, yours would be more hillarious. My dad's name is "Hu Ming Ren" (No kidding) and some ppl address him, and still does, "wu ming ren" (a person without name!). Even my mum got pretty frustrated when she first met my dad and he kept introducing himself as "wu ming ren" much to her disgust at such tasteless humour. To add insult to injury, his fren's called him Ah Jin (Hokkien) and the malay picked it up as anjing (coincidentally, he is born in the year of the dog) and we his children became anak anjing...

johnathan: u had me laughing on the floor. i shdn't tell this to d whole world, but my dad's name was 'hoi sam'(sounds like happy, but has a diff meaning in chinese). my bros n i used to laugh at him when he was in a good mood. n don't even talk about ur mom's frustration. when i first met my hub, i thought his name was the biggest joke. my mil wanted to name my youngest "yang". put "kang" (hong in mandarin) in front n the kids in school would call him "slaughter goat".lucky i stood firm on tt one.

Your post had me laughing. Your Chinese name and your sister's too are kinda, er, "CUTE" too. I won't mention them here cos' you might mention mine. Ha Ha Ha.
Hey,may be I am related to Joan from KUDAT.. which makes me how many steps closer?
R

Lol, funny post. How many steps am I from You?

r: ah flag, kill u if u tell! how come u always rmber embarassing things about me??

r: one step less than me, but i'll be following behind u.