I'm lucky that my MIL is not only the best cook I know, she's also obsessed with cooking, even at 75. She wouldn't let me bring over any dishes (not up to her standards?) and insists she cooks everything for every festival and family dinner. Lucky old me just sit and wait to eat. This year, all I did was make the dip for the plain boiled chicken and even then I had Vero make it for me.

But I was busy, too. I waited till the last minute (bad habit) to make my pineapple tarts, seaweed crackers, lapis cake, butter prune cake, radish cake and waterchestnut jelly. Didn't make it to bed until 2 am on the eve of CNY, and people were told to come at 9 am the next day.

How was the midnight celebration at your place on CNY eve? It was like a war zone in Penampang, with all kinds of big and small firecrackers let off. The fireworks display was fantastic, burning thousands of $ in the sky. I was running to Hub's SIL's house 2 streets away, at midnight, as the firecrackers blasted everywhere around me and the sky lit up with an awesome display of colorful fireworks. I was in my casual top and pants (this is for you guys who need to put on a jacket everytime you step out at night, yes, eat your heart out, this is the tropics), and the air was cool and filled with the exciting smell of gunpowder as small groups of teenagers played with firecrackers and fireworks outside their houses. Out the main road some car started honking to ring in the Year of The Ox. A police car strolled by, and didn't stop. A miracle, because you'd think they'll stop to ask for ang pow since firecrackers are illegal.

Oh we just love CNY. A friend from Singapore and another from KL called and both lamented that those big cities didn't celebrate CNY like we do in KK. Many families don't bother to get together for the reunion dinner anymore, especially when their old folks are gone. Some-oh, God forbid if it becomes a trend--eat out in whatever restaurant that is open.

MIL's reunion dinner dishes have toned down in amount and richness considerably as she finally acknowledges that her children have all grown up and are begging for leaner meals. Still, CNY dishes are more meat-based, and after the dinner I felt nauseous. The thought of eating and eating for the next 2 weeks made me shudder, but I'm a true glutton because by morning I was looking forward to dinner again. And so that's the way it will be nearly everyday or so for the next 15 days, especially now that one of my nieces in Guangzhou has decided to visit us this coming weekend. There will be more reunion dinners. 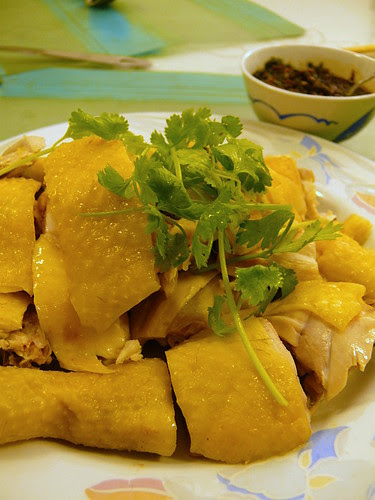 'White cut chicken' (plain poached chicken) is always on the reunion table. It is not only tasty and simple to cook but it also balances the fried dishes since it is boiled. I LOVE white cut chicken but the chicken must be home-reared, not from the farm. This one is home-reared but still left me dissatisfied because I miss the CNY and festival chickens of those old days where roosters are neutered and reared on corn for at least 5 months or more so that they grow into big giants and their meat become tasty, sweet, flavorful and firm (sometimes tough) and their skin yellow with corn oil. It is nearly impossible to find these capons because the art of neutering roosters is lost and it is economically unfeasible to raise chickens for so long (a capon can cost over RM100 now since home-reared mature chickens cost about RM70 during festive seasons). Also, the demand isn't there as the younger generation have gotten used to eating wimpy, soft, tasteless flavorless farm chickens. 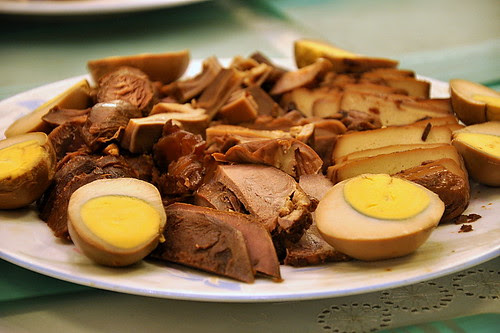 A dish MIL prepares only on festivals, and once you've eaten it, you'd crave for it, according to my friend M. Shanghainese are big on 'red-braising', a method of cooking meat in spices, wine and soy sauce over a slow fire. I have never bothered to cook this since MIL does it so well. 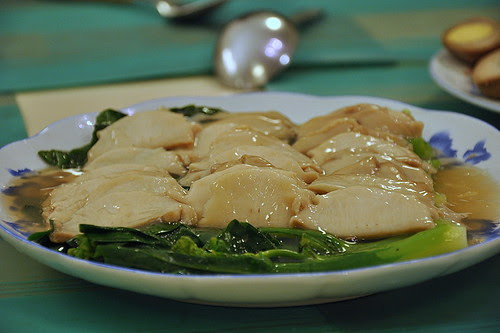 Despite their rubberiness, abalones are decadently delightful to eat, and sometimes I wonder if it's because they are one of the priciest food around. Abalones have a yummy flavor and are best served with a light sauce made from the liquid they were canned in, as in the dish above, arranged over lightly scalded kailan, a veg related to broccoli. I found these abalones a little lacking in flavor (Skylight brand) as compared to the bigger, more mature ones (Moon and Wheel brands). 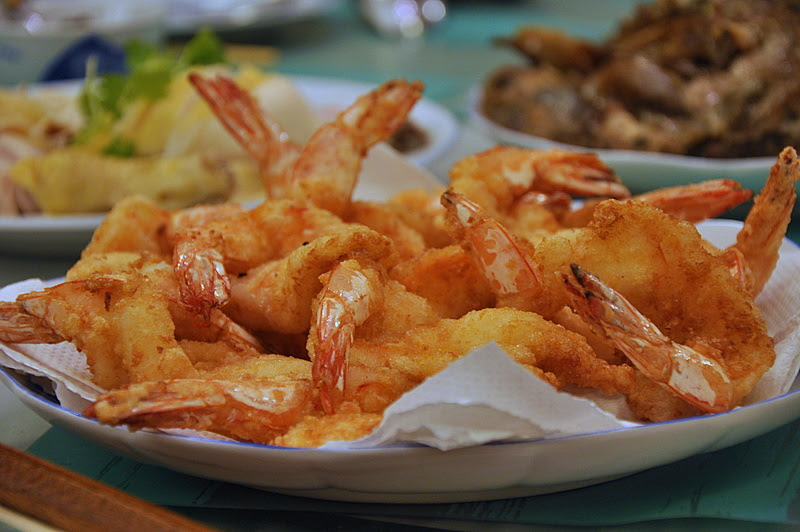 Yellow prawns have the best flavor and texture, tender even when they are big, unlike tiger prawns which become tough and dry. This is MIL's simple way of cooking the shelled prawns, seasoning them with a light mixture of pepper, salt and 5 spice powder, coating them in cornflour and deep-frying them in very hot oil briefly so that they are crispy outside and moist and tender inside. These prawns were bought 10 days ago through a friend, Peter, who knows where to eat the best food and get the best ingredients. I am so blessed! Thanks, Pete. 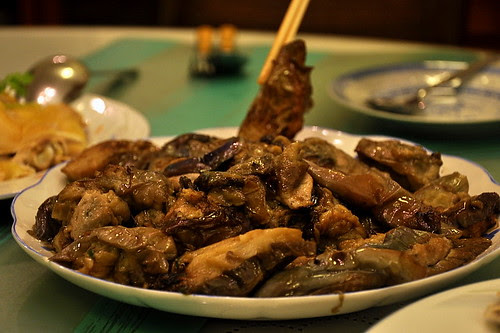 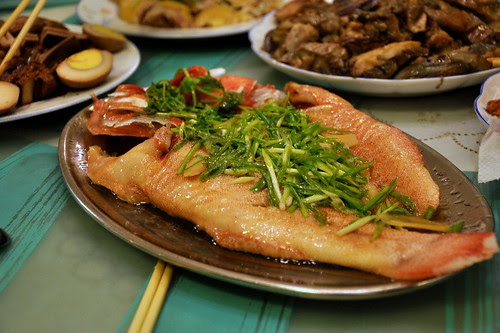 Fish is a must item for the reunion dinner as fish in Chinese sounds like the same word for 'overflowing abundance'. Also, the fish must be served whole because of the saying "there's head, there's tail" meaning completion (as in not doing things halfway). 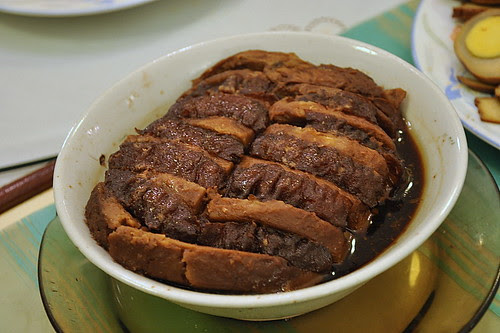 MIL fought for this bowl of Hakka koe rou from the famous stall in Bukit Padang a week before CNY! She lined up and when she got to the front, she took "quite a few bowls" but some people ("liu mung" -hooligans- she called them) behind her tussled with her for the koe rou. She was most upset and indignant at the ridiculous incident, saying there was no rule to how many bowls each person could buy. 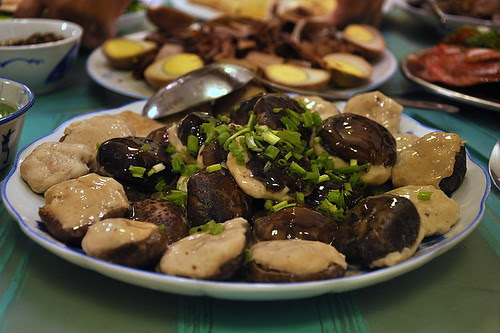 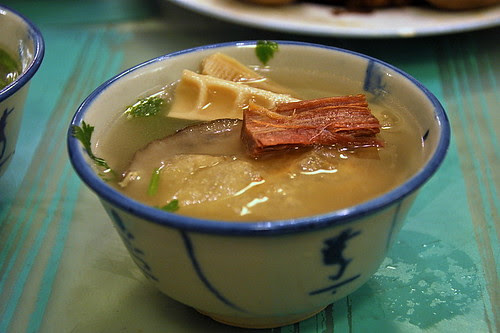 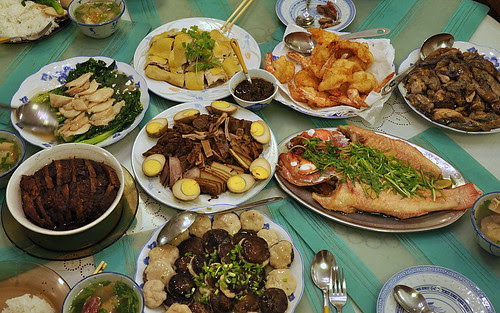 Dessert was bai he tangsui (a sweet soup) that signifies unity and harmony. And that was our reunion dinner this year, with 8 (the Chinese lucky number that sounds like prosperity) dishes and a soup. And now I've got to get back into the kitchen because we have a 2nd day reunion dinner in my house and I'm making shuijiao, a perfect thing to eat after all the fried meat dishes.
Posted by terri@adailyobsession at 6:52 PM

Happy Chinese New Year Terri to you and your family. And good to know that there was a good atmosphere in your area at midnight. I was in the general area on CNY eve last year and it was pretty amazing with all the fireworks and smoke in the air :)

wow...there's so much food there to ogle over. indeed hong yi is blessed with great mum & grandmum cooks.

i only had a steamboat lunch with my brother & cousins. and the steamboat was done out of the rice cooker because we couldn't find the proper steamboat utility :P

Gong Xi Fai Cai Terry, I did not know stuffed brinjol was a hakka dish, but I love it!

Terri, Gong Xi Fa Cai. My god, your reunion dinner was superb. You are right, in big cities you can't feel CNY atmosphere. I was in Singapore during CNY 2 years ago, I felt it was just a normal day. A few years back I stayed with my friend in a small town in Johor, CNY was great.

omg, im really stuffed by just looking at all the food!!

funny thing i learnt about abalone this CNY..apparently some1 taught us to throw the whole can, including the can into boiling water for a couple of minutes..take out the can, and open..and the abalone is ready to serve!

what a good spread. love the Hakka dishes. 7Star Grouper rather pricey right? and those prawns .... perfect snacks!

The prawn! is that the butterfly prawn? I remember I read thru ur blog somewhere, teaching how to devine and cut the back of prawn, so when u fry, it wont curl, and flat like butterfly! can u guide me where's that page again? I am doing that during reunion dinner, I cut the back of prawn horizontal, then slice the front. but still my prawn "CURL" ! Y ah?

Gong Xi Fa Cai to you and Family Terri. what a spread...yes I remember all those fire crackers and lion dances. they used to come to our house too as we lived in Penampang and my children got so excited!!

Thanks 4 sharing! How do u do yr lapis cake (layered cake). Do u bake d 1st n last layers n @ what temperature? Mind sharing some of yr culinary skill?

I still owe you the list of good eateries in KL hor?? When you coming? I was a bit busy before CNY so it slipped my mind.

Oh yah...for my CNY eve, my MIL ordered a whole roast pig and we attacked like barbarians! Tearing and shredding the meat off the pig!!HAHAHA!

kimmei: tt's d idea. i can't understand why u kids don't stay back for cny :(

bryan: thnx, u too. but do know tt lots of oil is used when cooking brinjals..

linda: thnx, u too. always go back to kampung for cny..

joe: i think tt really works, bc u d abalone is already cooked.

denise: i think it's in the seafood category, or soba? if u butterfly it shell on, you need to cut it till it is almost through and press it down.but for tempure, u don't cut it almost through. u cut the underside and tug a little

zurin: i heard tt almost all residential areas were noisy this year. midnite this mrning, the 9th day of cny, was noisy with firecrackers too n i hate it when ppl let off the 'thunder fire
cracker'.

anon: i bake the layer cake at 200 C, n give the last layer an extra minute or so. my recipe is similar to nee's, pls check her post on lapis cake :)