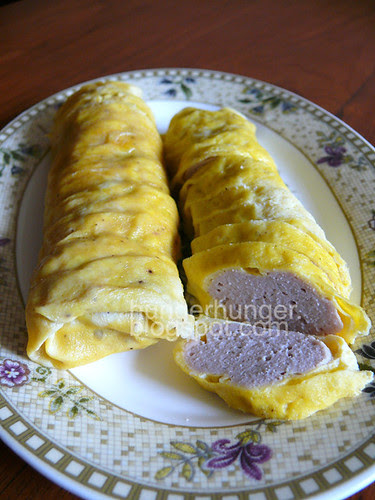 I think the confusion about the names of many Chinese dishes came about because sometimes each dialect pronounces the same thing differently and different things the same. Take the Hakka pork egg roll for example. We call it chun gen in Hakka, but that can mean egg roll or spring roll since chun can be egg or spring when spoken (although the characters are written differently). To make it worse, people like me, who speak but don't read or write Chinese, mistakenly translate chun into English as spring instead of egg and so these rolls are also called spring rolls which they are not.

In Hong Kong, egg rolls (dan guen, not chun guen because chun in Cantonese means spring, not egg. Still with me?) are those yummy sweet flaky rolls that are hollow inside. For that reason, I'm calling these pork-filled rolls pork egg rolls. Pork egg rolls are very different from spring rolls. Spring rolls are those delicious, crunchy deep-fried rolls with a meat and veg filling inside and a phyllo-like 'skin' outside. Pork egg rolls are rolls with minced pork filling and egg omelette as wrapper, or it can be a smaller version of the pork roll served in yum cha places. I hope you are still reading.

So next time you order egg roll and get spring rolls instead, you know how the mix-up came about. This will only happen in Sabah though, because apparently pork egg rolls are not found in other states of Malaysia (correct me, Westies).

My bro was here last week from Singapore and one of the things he craved for was pork egg rolls. I have been weaned off this item over the years because I find the taste of the pork quite unpalatable. I suspect bicarb of soda or some other chemical is added to the pork (cheaper cuts are used) to tenderize it and to make it swell. Whatever they put kills the sweetness and flavor of the pork (which is corrected with generous spiking of msg) and gives a slight alkaline taste (a saltiness that is unlike salt). Even the famous pork rolls from Kudat, the northern district of Borneo where the first Hakkas from China settled into, have this taste now. If you like commercial pork egg rolls, you are actually liking the msg. I also abstain from pork rolls because most of the rolls sold are now swiss-roll-like, with the egg omelette rolled into the mince so that the egg, which is cheaper than the meat, gives bulk to the roll but does not give the same bite as the authentic rolls. The only pork roll that still tastes alright is sold by an old lady vendor outside Thai Seng Supermarket next to Kian Kok Middle School. This is the same vendor who sells the best freshly-made tofu in town that doesn't smell of calcium sulphate.

Do you know that one skinny egg roll is now RM5/US$1.40, up from RM3? And they are now much shorter too, about a foot long only. This is something that really makes me hopping mad. Prices go up, but the goods are either of inferior quality or reduced quantity, or both. When oil prices went sky-high, so did the prices of everything but now that oil prices are low, the prices of everything keep going up. Consumers always end up short-changed. 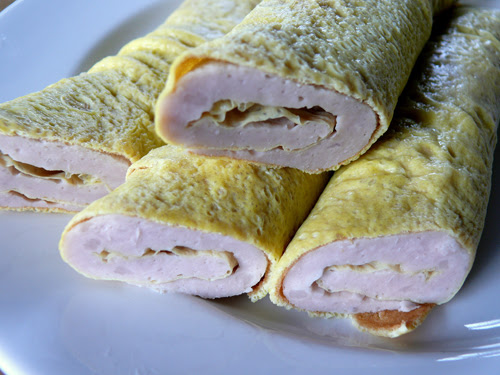 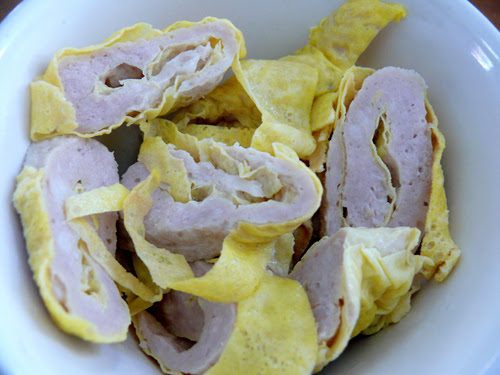 These pork rolls from Lido Market were bland pork mince masked with lots of msg and swiss-rolled and they unravel after being cut.

My Wey loves egg rolls fried rice so I decided make my own egg rolls for the first time today. I checked Lilyanette , who seemed to be the only one who has done a post on the rolls so far, probably because these really are to native to Sabah. I have simplified the seasoning of the meat but it's up to you really how you want the flavor. In terms of costs, there won't be much savings since you'd be using better, leaner cuts of pork and making the filling thicker. I can see why they are selling these rolls for Rm5 now. I bet one day they'll add spring onions and chilies, eggsand flour etc to bulk up the rolls.

Taste wise, my egg rolls are far better than the commercial rolls but texture wise, they were coarse because I used pork tenderloin, which is all lean meat. As with everything, practice makes perfect and I need to make the omelette thinner (should be nearly paper-thin) and tuck the rolls so they are more compact. I think pork fat not only gives a smooth texture, it also prevents the rolls from shrinking after cooking, so that they are well-filled and compact.

Note: although in Sabah these rolls are strictly made with pork, some readers have pointed out that these rolls can be made of fish paste or beef so that's an alternative to those who eat kosher or halal food. Just make sure you get the meat springy and bouncy to the bite.

*pork fat will give a smoother texture.

1. Chill the pork for an hour. Cut into small chunks and put it (by portions) in your machine, adding salt and pepper. Mince it until it becomes a paste and looks stiff and sticky. To make it more firm to the bite, use a pair of chopsticks or your hand and stir the mince in a bowl in one direction until the protein in the meat develops a springy texture.

2. Put the pork mince into a plastic bag and cut a hole (say 3 cm across) at the end for piping.

2. Add salt and pepper to the eggs, whisk well so the whites are fully mixed with the yolk. Let it sit for a while so that the air bubbles disappear.

3. Heat up a large non-stick pan, add a teaspoon of oil and smear it all over the pan and sides. Add the egg all at once, swirling your pan quickly so that a very thin omelette forms. Use very low fire. 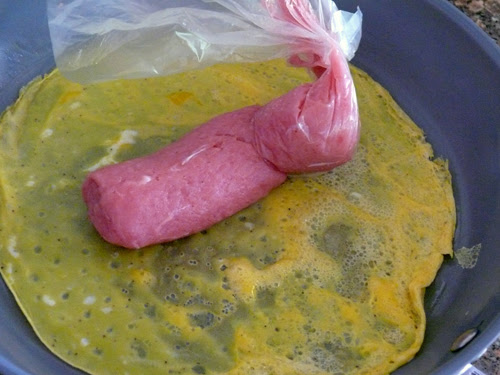 4. When the omelette is set and firm (I don't flip over), remove the pan (do not remove the omelette from the pan; makes the rolling and handling easier) from the fire and pipe the meat sausage-like across the omelette, closer to one side. Fold the nearest side over the meat, fold both ends too and roll carefully until the omelette is all rolled up.

5. Put the rolls, seam-side down, on a heat-proof plate and steam 15-20 minutes (depending on the thickness of the meat roll) under medium-low heat.

6. When the rolls are cool, slice them diagonally, not too thick or thin, and serve with a chili-soy sauce dip.
Posted by terri@adailyobsession at 5:39 PM

mmm I missed eating this when I was in Tenom. They had the beef version of it. Doesn't know whether they are still selling or not.


Sadly the ones selling in KK - price is so high up and the quality shrunked!!!

Argghhh, I miss this!!

Hey Terri, I thought they used fish paste as well in the making of this pork egg roll?

looked familiar..i think my mom does this with fish paste instead.. and puts a oyster based sauce over..

great blog. I missed eating this, will include this in my to-do list

It has been sometime since I last made this! I think the only hard thing to do is getting the omelette really thin and perfectly yellow and not scorched. I like the simplicity of this dish and can eat it anytime. Sad to hear that KK has degraded so much on its food quality!

I have not eaten this before. Good ingredients makes the food great. Fillers like pork bits from different parts of the pig may be added when eating out.

agnes: thnx for telling me, if i go to tenom, i'll get try the beef rolls

anon: tt's why i posted the recipe. get cracking.

alice: welcome. make sure recipe doesn't sit in a folder...

lilyann: smtimes i think we're having a food shortage, serious. i couldn't even get good potatoes recently.

worldwindows: tt is why i keep telling ppl: cook at home!

Wow I'm in London and there's no way in hell I can get that here :( Oh cute blog btw, makes me miss home!

haha Terri , you are right. I have hundreds of recipes in my folder, but I will place this at higher priority . I miss this and the beef meat balls too.