There are reasons why people don't go to Manila. The food is not great, the traffic is hell, the shopping is mediocre (I could think of worse adjectives but I shouldn't be too harsh; they need the tourists) and there's only the Ayala Museum to dive into if you want something cultural. Then there's the weather. Of the 3 days we were there, two were rainy days due to a typhoon called Isang. I'll tell you about Isang tomorrow.

It's not easy to find a place to eat in Makati in the morning but if you are adventurous, there are lots of mobile stalls like this: 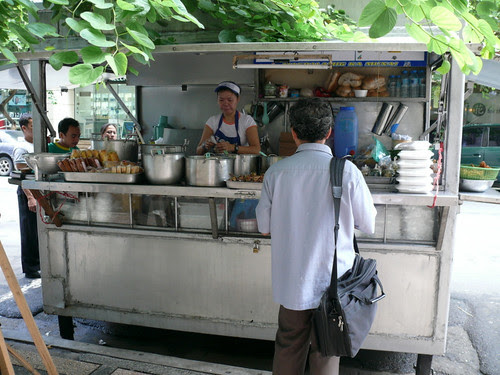 The weather on the first day was fine but we went shopping. All day. The second day, we woke up to rain and huge traffic jams but that was okay because we lived only 5 minutes from the Greenbelts. Since we had done the Greenbelts the first day, we decided to go further, to Rockwell Power Plant Mall. I don't know why it's called power plant because it looked like a regular mall to me. I like Rockwell Mall. It is small, elegant and pleasant. It has top designers shops like Ferragamo and brands like Zara but just as in KL and Singapore, the labels are there but the selection is very limited. I think branded goods are slightly cheaper in Manila than in Hong Kong.

We were lost again when it came to lunch. What can you eat in a mall? It was either Filipino-American fusion or fast food. I was thinking of trying California Pizza but the others wouldn't touch Italian after last night. The only food we all agreed on was Japanese shabu shabu, again something we didn't expect to eat in Manila.

We are true Chinese to the core, because we felt so good eating Japanese shabu shabu, which is like a poor man's version of the Cantonese steam boat. The soup and the lack of oil were refreshing and blandness was welcome when your taste buds are tired. 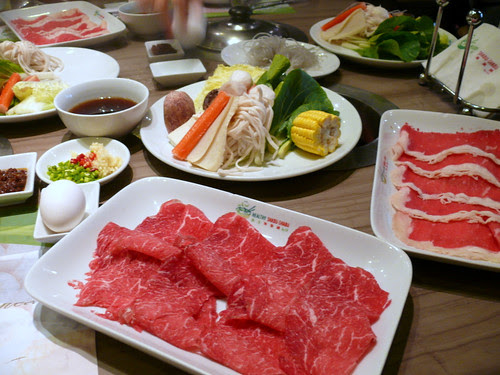 I liked the wheat noodles the most. Chewy and smooth. 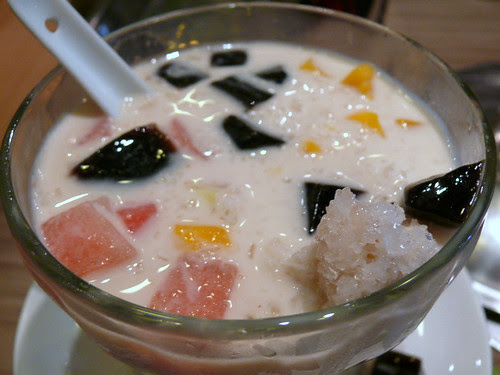 Rockwell is small and isolated so we took a taxi back to Glorietta and went to the supermarket for fruits. We asked a lady where to get the best lechon, and she asked what lechon we wanted, chicken or pork. I thought lechon was roasted pork. Same thing happened when we asked a taxi driver, who wanted to know if we wanted lechon baboy (pork) or lechon manok (chicken). I've since found out that lechon in Spain is suckling pig but in The Philippines, lechon refers to the roasting method of cooking. So when in Spain, ask for lechon but when in The Philippines, ask for lechon manok or lechon baboy or lechon baka (beef). But to confuse matters, lechon kawali is pork fried in a kuali (wok) so I think the word is pretty much misused.

Anyway, the lady directed us to Lydia's Lechon located in the basement of Landmark. There were lots of other places for lechon but we'd have to go out of Makati. We went to Landmark's food court in the basement but couldn't find Lydia's, which was unfortunate because I've since found out that the lechon in Lydia's Lechon chain of restaurants is the most well-known in Metro Manila. We settled for the Baliwag lechon, but they were out of lechon baboy so we had the lechon kawali, which like I said earlier is not roasted but deep-fried. 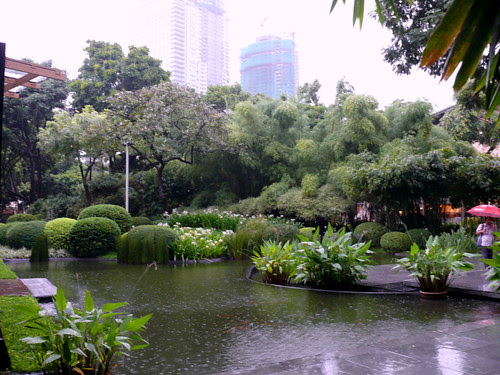 Little pockets of well-manicured gardens that connect the shopping and office buildings of the Greenbelts. Metro Manila is very green, with lots of nice medium-sized trees lining their streets. 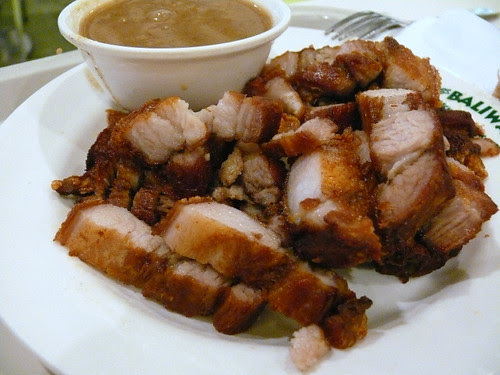 Baliwag's Lechon kawali was tasty, tender, lean but not dry. The skin though was thin and hard-crispy, probably because it was deep-fried. I doubt it was a suckling pig because there was too much meat. P165/RM12/US$3.15 plus a bowl of rice and a plum sauce dip.

My only regret about the trip now is that we didn't go to La Loma in Quezon City where rows of lechon baboy are displayed outside the restaurants. We thought we could eat lechon baboy anywhere in Makati but everytime we asked, it was sold out or unavailable but lechon kawali was always on the menu. I think that's because lechon kawali is just pork belly which can be fried to order anytime while lechon baboy is cut from a whole roasted pig. We never got to eat lechon baboy.

The next place we went was to satisfy my daughter. We were told that for cheap clothes and shoes, we should try Greenhills. The locals, such as the lady we spoke to and the cab drivers, insisted we shouldn't go there but Yi was curious and she loves cheap bargains so we took a cab out to Greenhills. Taxi rides are very cheap. A half-hour ride costs about P100/RM7/US$1.90 and all taxis are metered. But never sit in front. I did once and couldn't wait to get out. Most of the roads are not marked and a 5 lane road can fit in 8 lanes of cars, each one 1/2 foot apart and racing at 80 kmph in heavy traffic. Coming from small town KK, taxi rides in Manila are terror rides. I wouldn't recommend jeepneys either. Their drivers are either crazy or seeking reincarnation.

What can I say about Greenhill? It was a waste of time for me, but Yi picked up a couple of P130/RM10 T-shirts.

Dinner was in Greenbelt again. Hub wanted to treat us to a good dinner since he was happy that after 2 days, we still had half the P26000/RM2000/US$540 we brought with us. I got the feeling that I've made the stupidest decision to shop in Manila and not Hong Kong this year. In the end I didn't buy a single thing except for dried mangoes and chicharon (crispy pork rinds). Dang.

Zuni Restaurant & Wine Bar was rated Manila's top restaurant by The Philippine Tatler magazine, a fact that was printed, framed and placed at the door. The restaurant did look very elegant, and it was full with expatriates dining al fresco next to a beautiful strip of garden. 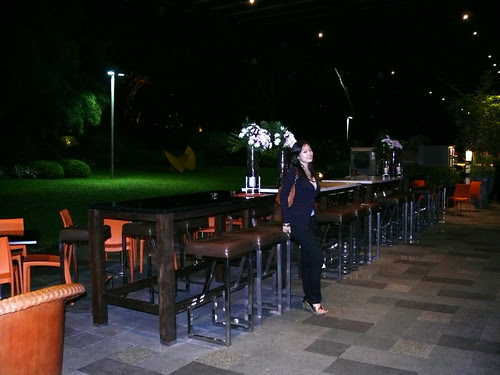 Two doors from Zuni was a Japanese restaurant which was packed earlier. Love the garden. 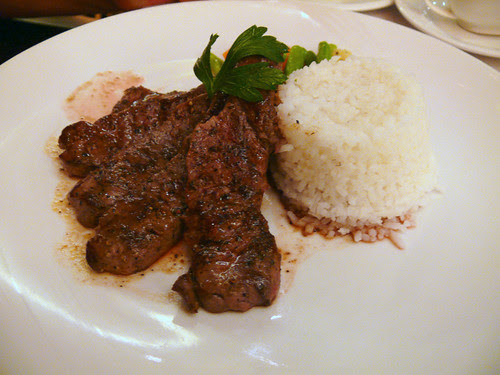 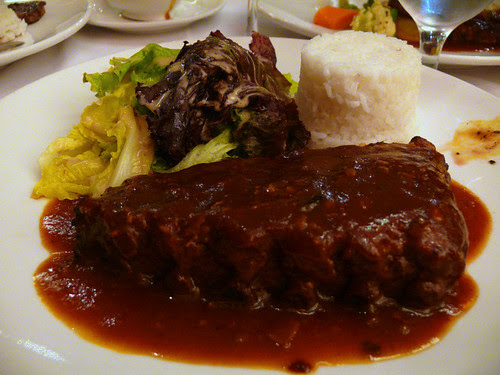 My choice of BBQ pork ribs was drowned in too much sauce to really taste the meat. P600/RM44/US$12 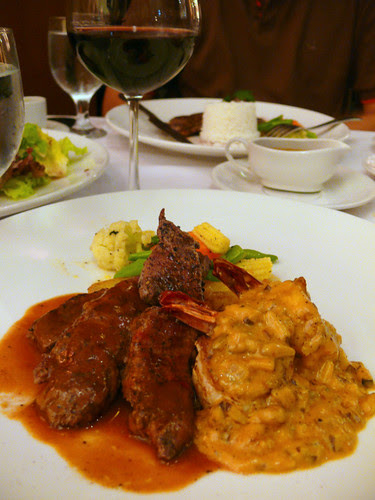 My prawn and dried tomato bisque was too tomato-ey while the soup of the day, mushroom soup, was the usual creamy stuff. With a moreau rouge from France, the meal was P2690/RM199/US$54 which was not bad considering the high rating of the restaurant. Maybe because the ribs and prawn bisque disappointed me so I rate this place 7/10. We skipped the desserts which were all western cakes and saved our stomachs for Manila's famous ice cream and leche flan and planned to listen to the lounge music at Shangri-la Hotel, which was nearby. However, both Yi and I could only manage one block before our legs gave way. We'd been walking from 10 am until 11 pm, with only meal breaks in between. I love it when my thighs quiver from fatique. No pain no loss.
Posted by terri@adailyobsession at 11:23 PM

oh dear..not much luck with local food i see..

and there i was, wondering which neighbouring ASEAN country to go next ....

joe: would've been better if we had a guide

j2:no no, u may like it. we weren't there long enough , or adventurous enough to give the place a chance

anon: tt's how some ppl drive, rushing to get killed

Yeah, you definitely need a local guide. Contrary to your experience, my visit to Manila was amazing, and I loved the local food. Even though it's been almost 9 years since I last visited, we still reminisce about the Philippines. I suppose my advantage was that my husband worked there for a couple of years, and thus knew the best places to eat at.

Too bad you had a wrong impression of Greenhills and about Manila for that matter.

Local and foreign coffee shops are bountiful. Small home cooked meals are best at the Milky Way (best halo-halo in Manila). Another halo-halo version is served at Razon's. Have you even tried the local ice cream?

At the tiangge (local term for flea market)you can get lost in a sea of south sea pearls, fresh water pearls, Hongkong set illusion diamonds as well as the Burmese/Thai semi precious jewelries.

As to museums, go to the National Museum in Manila, The Central Bank museum, the Chinese museum at Intramuros, to name a few. There are even docents to guide you.

There are lots of good restaurants here in Manila and most of them are not found inside the mall! Maybe if you had a local to guide you, you'd see Manila in a different light.

If you're looking for lechon, try the Cochinillo at either La Tienda or El Cirkulo. They're both in Makati.

We also have lots of good Italian restaurants here like Cafe Caruso, Cantinetta, L'Opera to name a few.

As for the local food, avoid chains like Gerry's Grill. Chain restaurants tend to lose the quality of the food especially when its just a franchise. Abe's in Serendra and Cafe Juanita at the Fort serve very good Filipino food.

You had actually stayed in the right city, Makati. Most of the really good restaurants are in that area. Too bad, you just didn't know where to go.