My first trip to The Philippines was in the early 80s. I went with 3 other girls on a guided tour and we enjoyed ourselves. We did the usual Filipino tour in the 80s--checked out the museum that Imelda built and attended a ballet, saw a traditional bamboo pole dance, went to Baguio City, had a morbid drive through their Chinese cemetery (in which the dead were kept in fancy 2-storey houses, complete with gates and furniture and their family members would picnic there playing mah jong), paddled a boat in a lake, ate their famous pork dish, lechon kawali, and shopped at the top departmental store Rustan.

In the years since, I've never wanted to go back to Manila. A week ago, we were tossing the coin between KL & Krabi in Thailand and Manila. Since we could only have a couple of days off, we decided on Manila, lured by the shopping that we were told was very very good. Excited and with open minds, we arrived late Friday evening at the airport in Clark two hours behind schedule, an AirAsia norm. Clark, which used to be an American air base, and its surrounding area looked just like any small town USA. There were hardly any houses, just lots of lush green trees and flat green fields (the land is rich from the volcanic ash of Mt Pinatubo, which erupted in 1991) and the one-storey malls with American stores like McDonalds and Shakeys' and the fact that they drive on the right side of the road made me felt like I was in Pennsylvania. Earlier, straight off the plane, I went into the washroom of the airport and was surprised by the cleanliness. No water on the floor (shame on Terminal Two, KK), absolutely no smell and no litter, not even shoe prints.

The bus ride (350 pesos) at 60 kmph took 1 1/2 hours from Clark to Manila. I would have driven there in 1/2 hour. Hub had booked a service apartment in Makati, the financial and business district and the only safe and decent district of the city. He figured that a service apartment would give us more space than a hotel room. The lobby of Perla Mansion was laid in marble and the wainscoting gave the place a classic continental look. But when we stepped into our apartment, we were hit by a strong smell of bad cheese, like baby vomit. We looked at five apartments and none was decent enough (bad smell, small beds, tacky mirrored bedrooms). I was quite upset and Yi was blue from withholding her breath so Hub firmly insisted on a better room in another building that the same management was in charge of. The polite bellboy then took us to another building a couple of doors away, the BSA Suites. The apartment was very clean, odorless and spacious, except the bed was queen-sized instead of king and the sitting room furniture though 1980-ish, was still new but uncomfortable and stiff. We took it, too tired to even shower. I hoped it wasn't a sign of things to come for the rest of the trip. 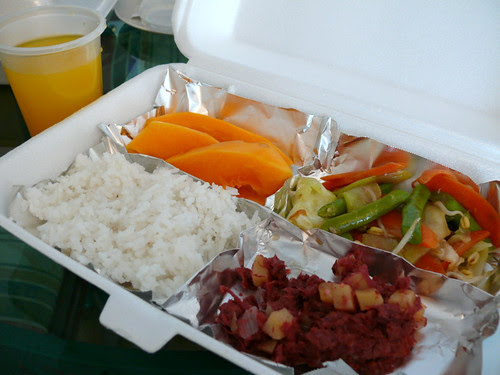 Breakfast provided on Day 1 was bad, with red corned beef, so Hub cooked instant noodles which we gobbled. I had laughed at him for bringing the noodles. Now I've learnt a lesson: always bring some. 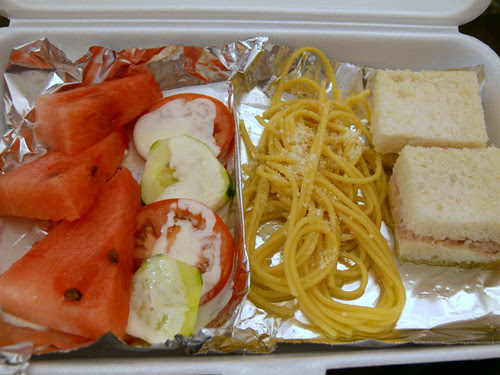 Breakfast Day 2 was so bad (the bottom of the sandwich was soaked in coconut oil), Yi and I shared our last packet of instant noodles. Hub went out for McDonalds'. Sausage McMuffin was only P25/RM2 each.

We hit the malls when they opened at 10.30 am the next day. We walked through SM Mall and Glorietta Mall, both mid-range busy malls that bored us. In the afternoon, we discovered the Ayala Center, commonly called the Greenbelt, numbered from 1 to 5. We liked the Greenbelts 4 & 5 which are modern shopping buildings joined by beautifully manicured gardens with al fresco restaurants.

I apologize to any Pinoys out there. I am ignorant about Filipino food and I know I shouldn't make a sweeping conclusion based on one meal from one particular restaurant. And our impression of a new place would be much better if we have local people or guides to tell us where to go and to what to eat. But I do write what I experience. And after Manila, I can't decide which I hate more, Greek or Filipino food. All of us lost weight after 3 days in Manila.

We wanted Filipino food and was directed to Glorietta 5. It was about 11:30 am and Gerry's Grill next to Mangan was filling up but there wasn't any customers in Mangan. I chose Mangan because it looked homey while Gerry's looked very much a American-Filipino chain restaurant. It was a meal we'll laugh and shudder about for a long time. 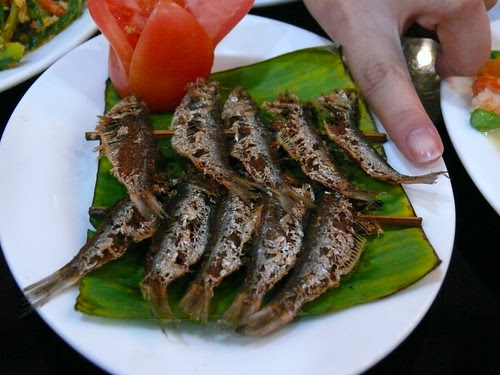 Recommended by the waitress, fried tawalis (P51) turned out to be deep fried crispy fish, smaller than a finger. We could eat that except that at first bite, Yi and I both tasted coconut oil which repulsed us. It was then we realized that the offending smell in the apartments , their lobbies and malls was that of coconut oil. Now while I love coconut milk, I can't stand the oil, especially when it is rancid. 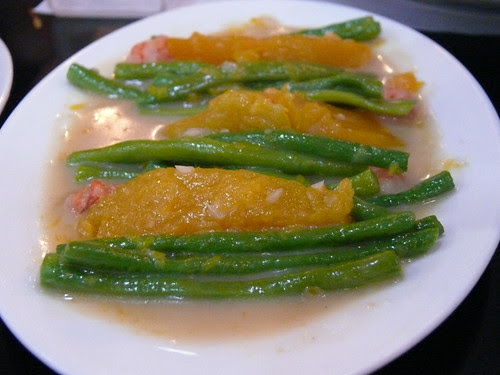 Gatang sitaw at kalabasa (P55) was a mistake. I wanted gatang sigarillas (winged beans). Cooked in coconut milk like some Malaysian veg dishes, it was okay but not special. 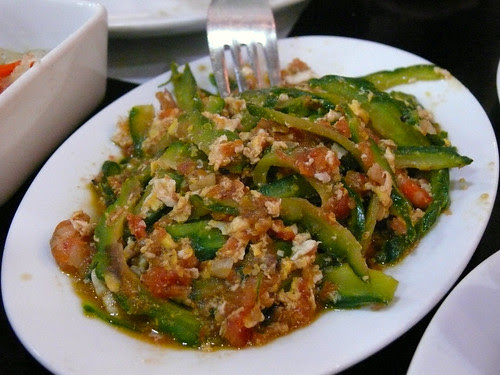 This was a dish my former Filipina neighbor used to cook, lagat ampalaya (P55), bittergourd with eggs and tomatoes. The portion of all the dishes were very small, like appetizers, which was just as well. 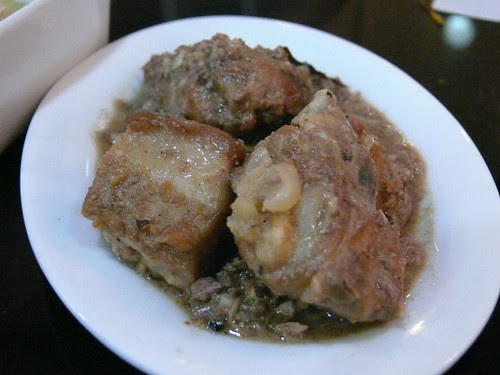 Adobong baboy at manok (P79) was pork and chicken in a vinegar sauce. Adobo/adobong is one of the more famous Filipino dishes so I was surprised by the lack of flavors and taste in this dish. By now we were totally downcast. Yi mentioned that maybe Anthony Boudain's job isn't as fun as it looks, and I totally agreed. The next dish confirmed it. 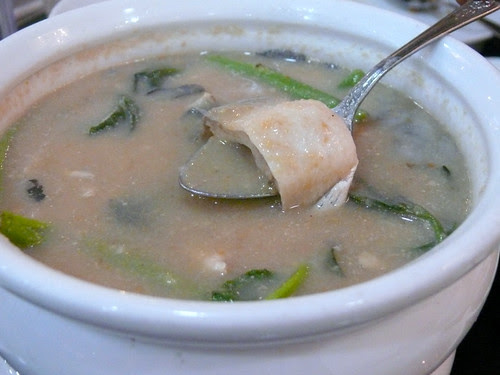 Sinigang na bangus sa babayas (P185) is a famous Filipino soup made with bangus, also known as milkfish also known as fish with a million bones, and tamarind, a seed that gives a sour-sweet taste.

One of my friends has taught me to cook this soup with fresh tamarind and another has given me Knorr's sinigang soup bases and the resulting soups are mild and refreshing butMangan's sinigang babayas is the mother of all weird soups. It came hot, giving off wafts of a strange smell that blew in my direction, immobilizing me and my appetite. Hub took a bowl and said it wasn't so bad and that the bangus (which we do love to eat once in a long while at the coffee shop next to Cathay Cinema) was very tasty. Yi took A sip and spat it out, making such horrible noises and faces that I felt embarrassed for the poor waiter who was politely watching us. She took another spoonful at her father's urging, pressing her nose with her fingers. I took my spoonful. It was quite tasty, sourish and savory but that smell was hard to take! I managed about half a bowl to my daughter's surprise. Actually I did that to show her that I was open to new tastes. Hub reminded her that I drank yak tea in Sichuan. I am open to trying new food but really, sinigang babayas this strong is one of the worst soup I have ever tasted. Yi's description that it smelt like saliva and sweat was spot on. 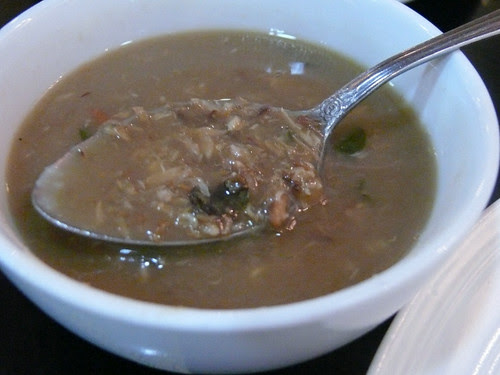 This was the best-tasting dish of the meal, beans and fish soup. 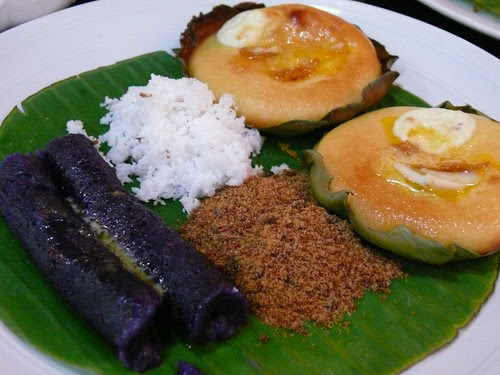 A sampler plate of dessert that included bibingka puti with salted egg and puto bumbong. Didn't taste good or bad.

That meal so put us off that we decided to break our rule of eating local food. But to be fair, I'm sure some of our Malaysian dishes can be very repulsive to the uninitiated tastebuds. Assam laksa. Belacan. Durian. Salted fish. Some food are universally accepted at first bite, like ice cream, hamburgers, pizzas, fried rice and spring rolls, but some are just what you are used to.

And that, I think, is the reason why Filipino food isn't and will never be world-popular. It just isn't that palatable unless you grew up eating it.
Posted by terri@adailyobsession at 11:51 PM

Hi Terri, geez, I dunno whether I should laugh or feel sorry for your state, especially your cute daughter's response to those food. Hmmm...If Wey is there, he will definitely returned as a "Sau mang kai".

One thing I never believed in while travelling is to NOT spend on accomodation. Second thing is to take local public transport. I would rather drive or go for taxi.

Milk fish is pretty good tasting but like what you've said, the bones is a great deterrent. I am planning to head to Manila next year, but going with my God-brother who is an ex-Filipino (Now singapore citizen). He's a great cook, so let's hope that his taste bud on local cuisine is as good and universal. Looking forward for more posting. Cheers!

Dude, you should have gone to Gerry's. Mangan SUCKS. I tried the food there a few monts back and it was horrible. I could have made better sisig than what they served me. It didn't taste like the traditional dishes at all. I know cause I'm Filipino.

If you want great-tasting Filipino dishes done right, try Josephine Restaurant in Tagaytay. They have the best food.

Hi Terri, when we met, u told me that u were going to Philp, I hold my tongue not to feed u any of my disappointment for Pinoy food. When I was in Makati, I enjoyed most was the 5 star chinese rest's food & KFC. Me too lost some weight when I was there.
I had my first taste of sinigang, last night, courtesy from our Filipino church members at their home. Thank God, Lou didn't used any milk fish but prawns and kangkung only. Very sourish but we Malaysians guests enjoyed it though. :-) The rest of the dishes, edible, I was virtually tasting the dishes not eating it. I was more looking forward for the cheese cake from STAR. MG

You are absolutely so right! I lost 4kg when I was there for a week. Their unripe green mangoes serve with lard and coconut oil. Eeew!

You should go to Sentro in greenbelt or bario fiesta or at Serendra in Taguig. Makati isn't the only decent place there. Mangan is just like a cafeteria.

joe: haha, the best is yet to come.

johnathan: ah we didn't realize tt ppl cook in service apartmts n tt stinks up the rooms. we didn't try their jeepneys, took taxis instead n it was very cheap. u r lucky u have a guide bcuz tt makes all the difference.

mg: i did enjoy sinigang when i cooked it using packet bases. it's so different.am sure they used more than tamarind in mangan. sweat n saliva?? n milkfish is nice, like it.

anon: aiya, i wish u had told me earlier. i do hate chain restaurants (found out later tt mangan is a chain restaurant) n mall food. i am sure the authentic homey restaurants serve better food bc i don't remember filipino food being this bad on my first trip. in fact, i loved a fried fish dish n have been hoping to eat it again:(