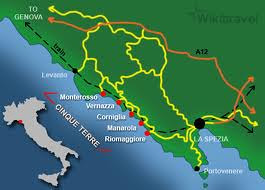 The place I most wanted to go to in part 2 of my Europe trip, besides Barcelona, was Cinque Terre in Italy.


Cinque terre ("cheen kweh teh reh" ,CT) means '5 lands', referring to the 5 fishing hamlets along the rugged coast of north-west Italy. The fishing villages hug to the steep rocky cliffs and were impassable, from outside or between, until recent years. Cars are not allowed into the area although buses do connect the towns. If you drive there, you have to leave your car at Monterosso, the first town from the north, or Riomaggiore, the first town from the south. Don't go to CT if walking, the sun and the sea are not your thing. The Italians I met asked why I didn't want to go somewhere more famous, like Sicily or the Amalfi Coast. I'd love to go to Sicily (for their famous tomatoes) and the Amalfi Coast looks spectacular in photos. My flight out of continental Europe was from Pisa, which is nearer to CT, while Sicily and the Amalfi Coast are further south. Besides, I wanted to rush to CT before everybody does. Right now, CT is known mainly to the locals and the Americans.
Being an ignorant risk-taking traveller, I didn't search for accomodation until a week before getting to CT. It was the beginning of the high tourist season and all the cheaper places were full. Thinking back, I should've just stayed at least a night at whatever price in one of the 5 villages. My bad planning caused us to breeze through CT in one afternoon, with only enough time to briefly visit 3 of the 5 villages and pass through the other 2. I recommend this place for atheletic honeymooners especially  during off-peak season.
1. Monterosso

From Genoa, the northern point to CT and other places in Italy, it's two hours to the CT area. The town before the CT region is Levanto and if you don't want to spend the night in CT, you can stay in Levanto and day-trip to CT. We didn't do that because we were working our way south to Florence. The train fare  Genoa to Monterosso was only 5 euros per pax and includes inter-village rides in a time frame of 6 hours, if I'm not wrong. I didn't know that and ended up paying 1.40 euros per pax to each of the villages. For 8.50 euros, you get a day pass for trains and other entrance fees. 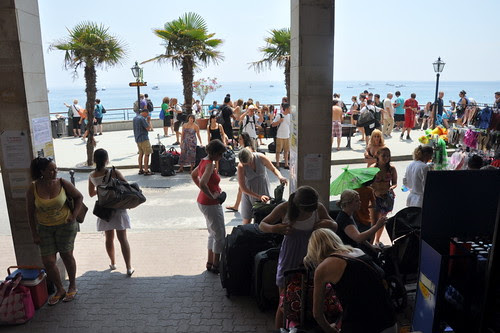 Scene when I came out of the station.

I was surprised to see a sea of sunseekers. I had expected a backward, time-forgotten fishing town. People were frying themselves on the pebbly beaches and bikinis were everywhere. The first thing we did was get a cap each; the sun was scorching. I told you about Asians and their fear of the sun. 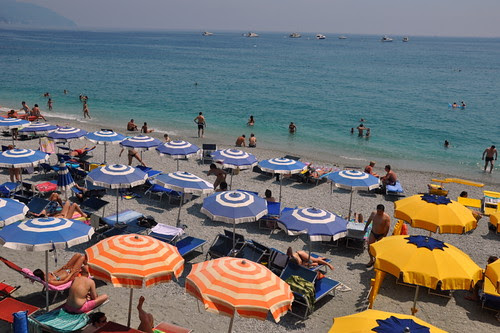 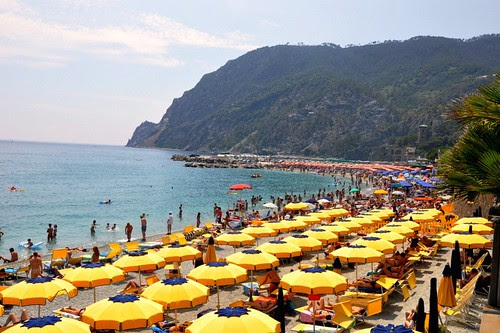 I stood there with our luggage looking like I'd  just had dropped in from Mongolia, totally out of place. If you don't swim or sunbathe or hike, CT is not for you. Plus we had luggage with us. The town is a distance from the train stop so we decided to go to the next town straightaway. Pity because there was plenty to see and do there, like visiting olive farms and places where they make anchovies, the area's famous produce. All the 5 CT villages are linked by hiking trails and the trail from Monterosso to is the hardest. Even seasoned hikers found the 2-hour trail  tough because of very rugged terrain and searing sun, good for Indiana Jones-types. The view they said was spectacular.
2. Vernazza
Only 5 minutes away from Monterosso by train, Vernazza's train stop is crazy because the train stopped inside the pitch-black tunnel and we couldn't see any signs. Lucky we asked and followed the crowd. 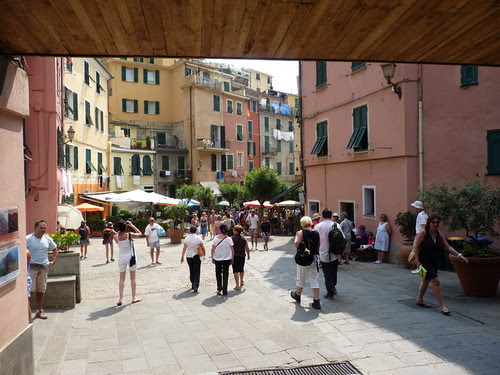 The town is right outside the train station. 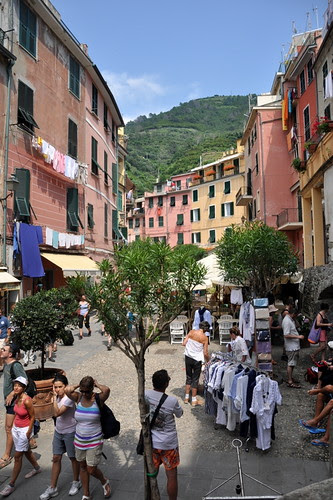 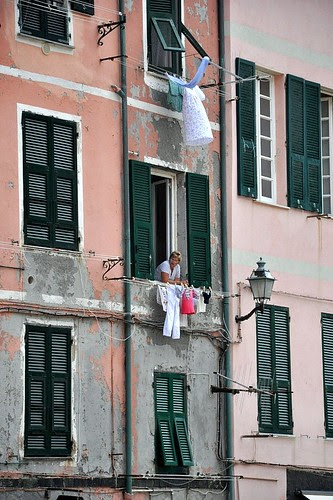 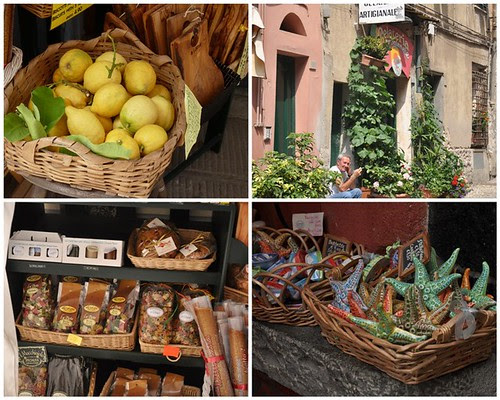 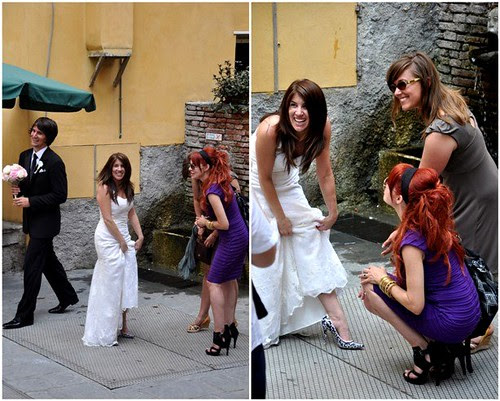 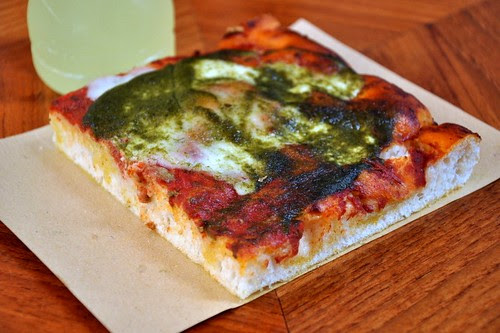 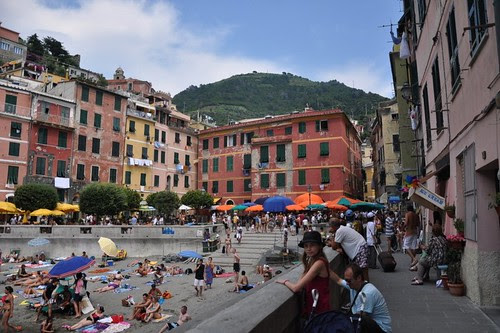 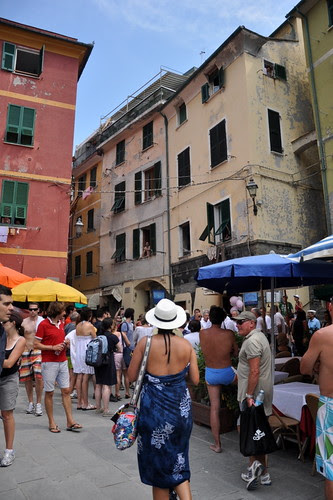 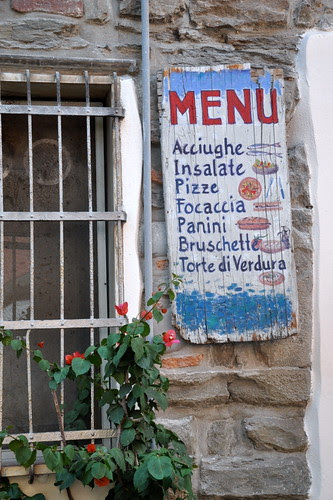 I can't put up some of my photos because I just saw some topless ladies in them. Didn't know it when I took the photos. 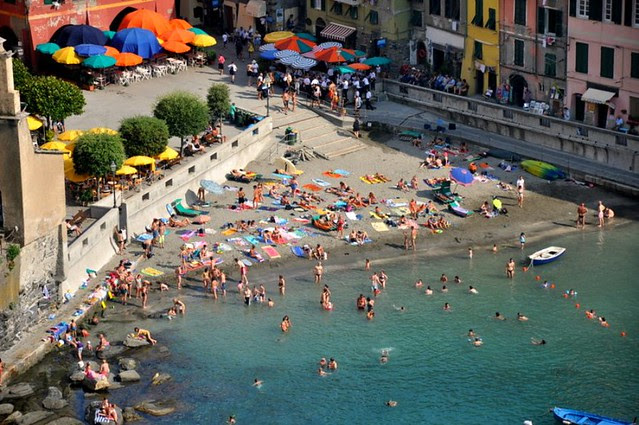 Aerial view of Vernazza's beach and the tiny town square--gives you an idea how small the town center is although on the hills there were many houses. Next to the red building is the main street. 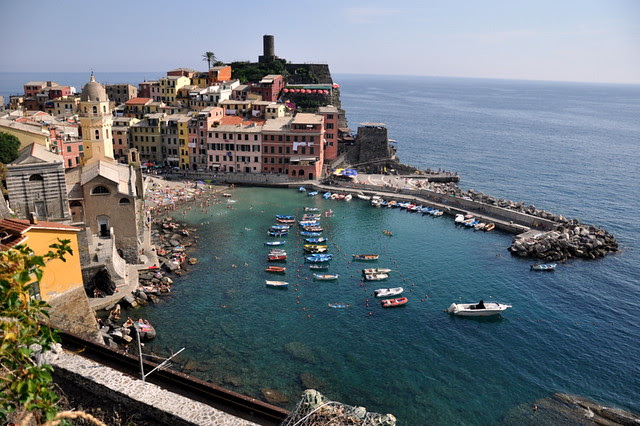 Vernazza is the prettiest town of the 5 villages, the prom queen as Rick called it, with colorful houses and pretty picturesque shops and is the most featured in postcards of CT.

In the small town square, a large group of men stood and sang American songs from the 70s, a pair of newly weds stroll with their entourage, sunbathers and swimmers relaxed on the small grey-sanded beach, cats basked in the sun, people sat around watching people and everybody was eating ice cream (cheap at 1.50 euros but flavors were quite artificial).
After wasting our time asking for rooms and checking online in a cyber  cafe, we realized that there was no way we could stay the night in CT so we hurried to the next town. Since we had luggage with us and it was impossible to discover the hilly town, I stayed down at the train station whileYi took the only pair of sneakers we had and went up the hills for the view and to take some photos.
3. Corniglia 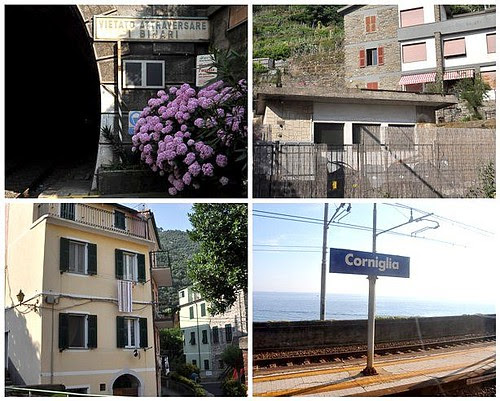 This is the smallest town and we didn't get down the train. The residents number about 300 only while the other towns have twice as many but that's still less than your local high school.
4. Manarola 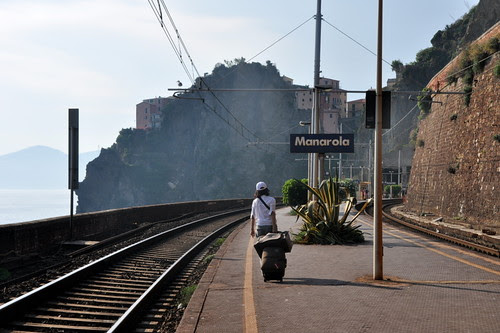 That's me dragging our luggage towards Manarola. Was SO HOT. 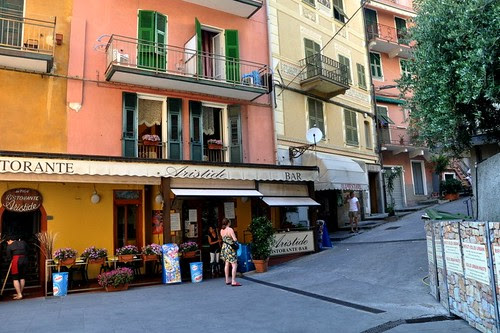 Scene from the train exit. I like this pretty town because there was less tourists. Manarola is on steeper hills and the town square is very small. There is a good hostel on the hill that's very popular. 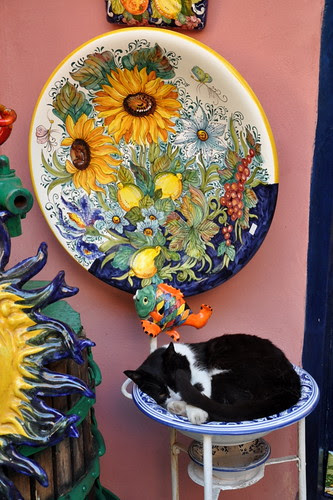 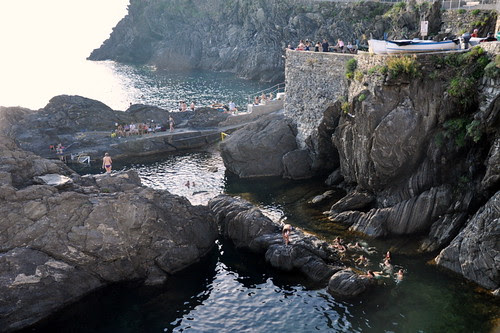 No beach but people were swimming off the rocks into a natural pool. Looked like fun. 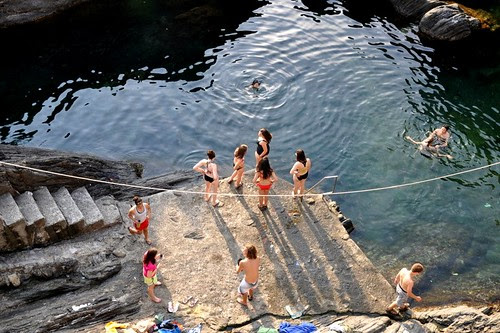 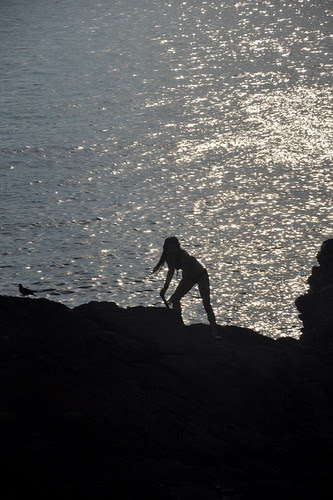 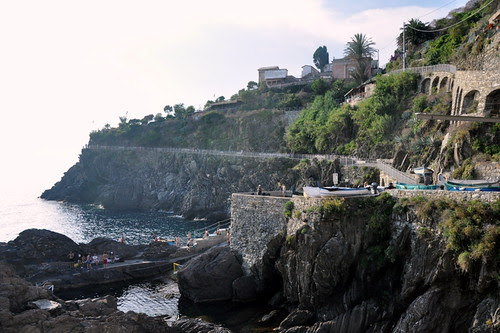 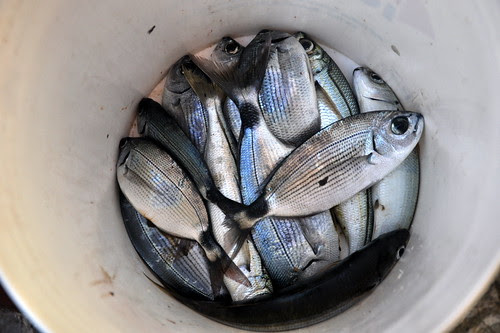 A guy and his kid walked by with a bucket of fish they'd just caught. 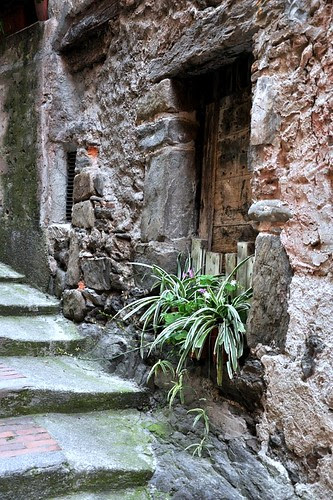 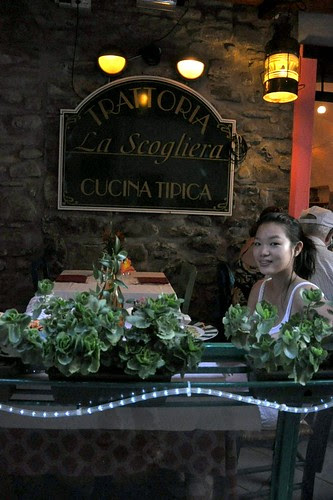 We had an early dinner in Trattoria La Scogliera. The food was delicious. 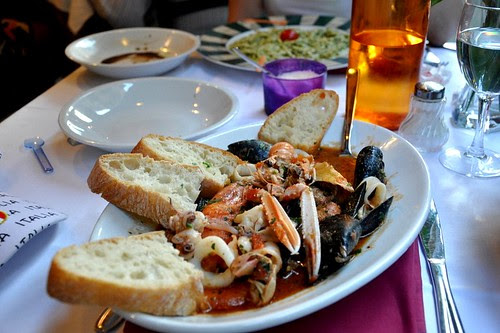 The seafood soup, 18 euros, was superb, with fresh crab, langoustine, mussels, squid and prawns, the freshest seafood so far. 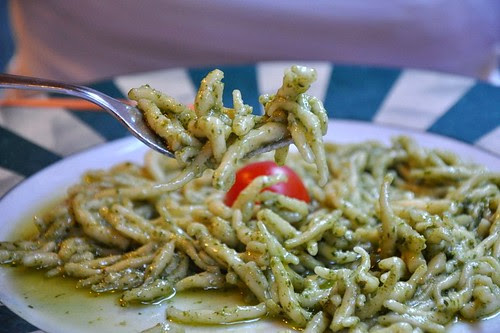 We also had the pesto trofie, 7 euros, a very Ligurian dish. Yi like the trofie but I found it too oily.
While waiting for the food, I went up the steps next to the restaurant for the view. A couple opened a door to reveal an amazing scenery. Pastel orange door, terra cotta tiles and a balcony that overlooks the blue mediterranean sea. It was like a movie shot. Wanted to take a photo but didn't want to intrude. A guy looked down from the upper balcony-- American by the way he was dressed; he was too 'I'm in Cinque Terre!'--in a floral shirt and sunglasses.  According to Rick Steves, these apartments are very affordable off season. 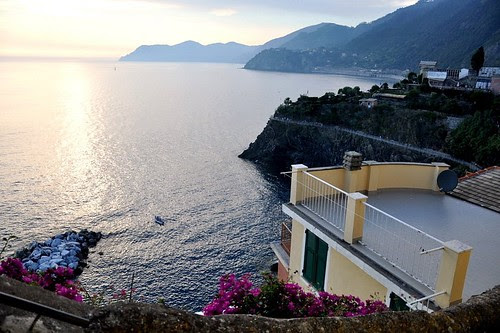 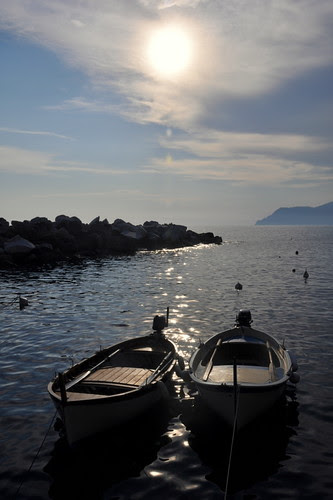 Posted by terri@adailyobsession at 7:52 AM

Terri, by looking at the photo quality, the natural light in this place is amazing. i envy a backyard liked that. Wish you safe and all the best. Reading your blog wakes me up, I am due for a holiday too.

this is definitely refreshing after being in the cold for 2 weeks, i hope winter in melbourne ends soon!

Absolutely stunning photos, Terri! Wonderful post too. I felt like I was actually there with you. Thank you for sharing.

cassie: makes me happy if reading my posts makes another personhappy. yes, travelling is one of the best things in life. i feel sorry for those who don't travel or travel but work all the time.

joe: but winter in melbourne is not cold?!

ccc: u are most welcome:)

You have beautiful photos! :)

I just came back from Cinque terre today, able to cover 5 villages in 3 days.
The ligurian cuisine is superb, my favourite is the lemon anchovies, not sure whether you have try that :)

jennie: wow, sooo lucky, 3 days in cinque terre! i bet you are browner than a berry now. do you have any phtots to share? i'd love some photos of Ct for my blog--will give you credit for them. no haven't tried lemon anchovies but they sound delicious!

Yeah, I will send you some CT pics once I have received from my friends.
:)
Or I will just give you the acccess to the CT pics on my picasa album so you can download yourself. But I guess I wont get them until two weeks, so bear with me ;)