A short walk to the other side of the Vatican City is this entrance into St Peter's Basilica. Although the church is closed to the public on Wednesday mornings because the Pope addresses the crowd from the church balcony, by early afternoon, the church is open again. 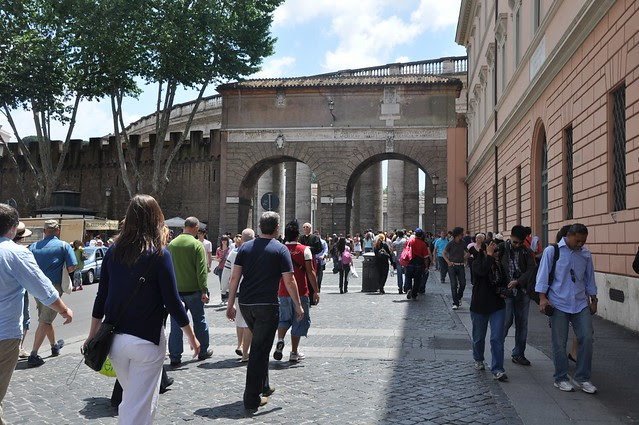 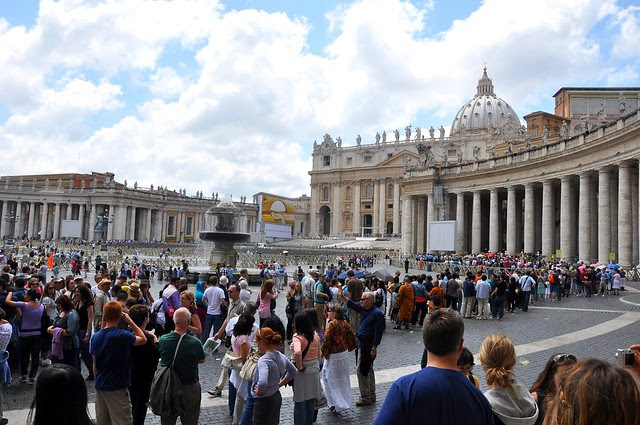 This is the scene when we got in. Hub suggested we leave because the line wound around the whole square. But if we left, we wouldn't have any other day to come again so we stood in line. Surprisingly, the line moved very fast and within 30 minutes, we were at the entrance of the church. That just shows how efficient they could handle the lines and how big the church is. St Peter's is the largest in the world with a capacity to hold 60,000 people. Because the line was a few people thick, many people just cut in and it was hard to tell them off when it was so rampantly done.

Entrance is free of charge but be sure you are decently dressed. I was stopped at the Basilica entrance because my arms were bare. I put on my sweater and was allowed in but about half a dozen men were standing to the side, bounced from entering, and their transgression seemed to be their flip flops. 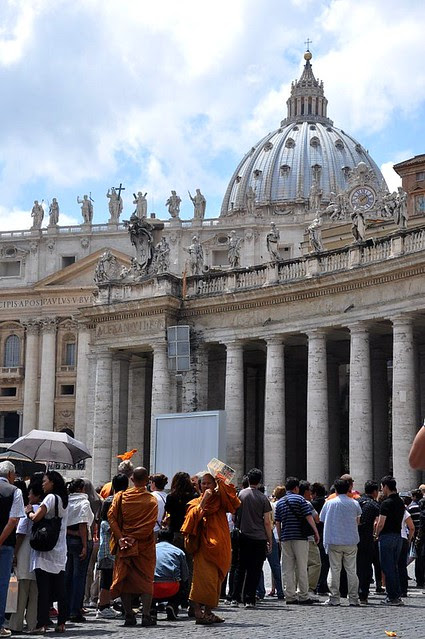 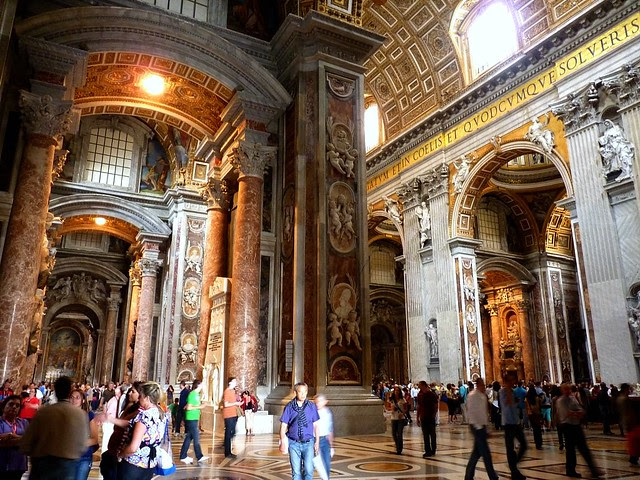 There's so much to see in the Basilica, from tombs of popes and saints, to famous paintings and sculptures. You need more than a day to cover the whole church and the dome. 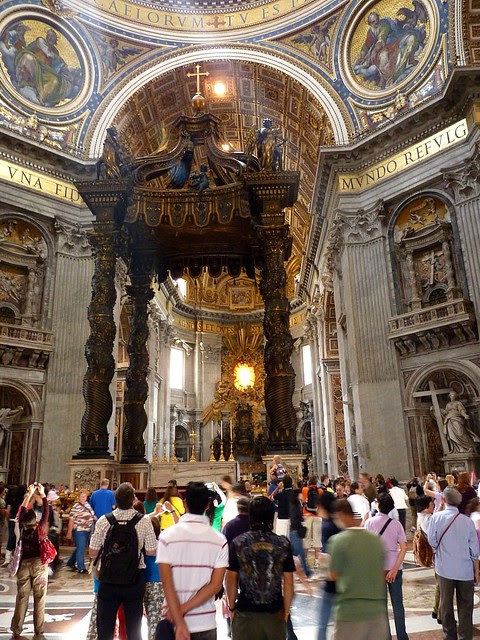 This baroque structure, called a baldachin, was designed by the Italian sculptor and architect Benini. Under the structure is the tomb of St Peter. 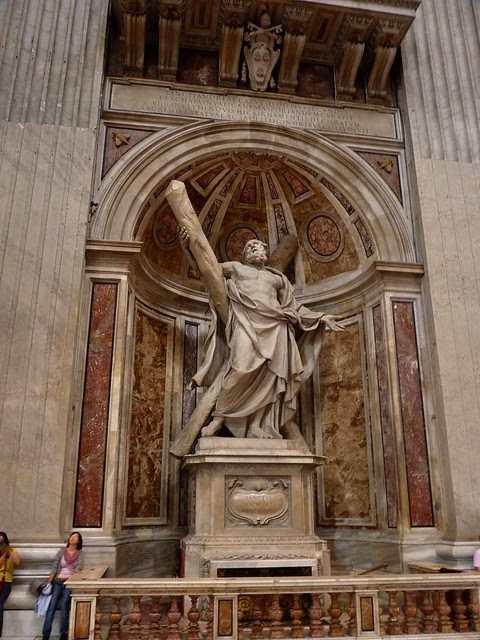 I didn't expect the Basilica and everything inside to be so massive. The statues, paintings and sculptures are just awesome. I think everyone has to visit St Peter's Basilica at least once. My trip to the Basilica preceded my visit to Sagrada Familia. Personally, I prefer the interior of the SF even though it is still not completed. St Peter's is too Baroque for me, to put in simply, but the statues and the paintings are hard to beat. I have met at least 3 people who went to the SF and didn't go inside. It's like looking at a luscious chocolate cake and not eat it. 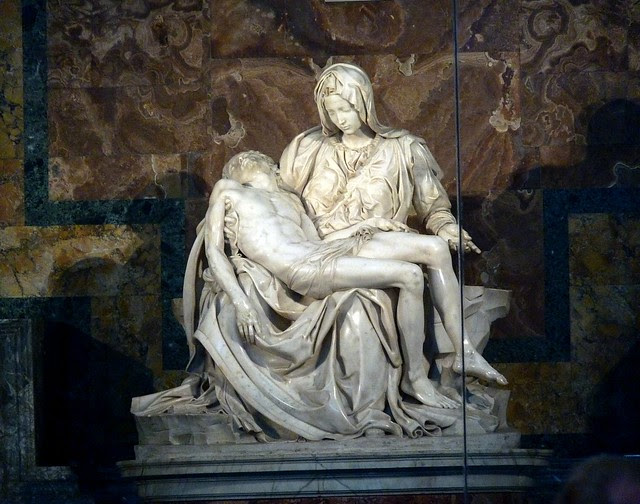 Of all the statues in St Peter's, this pieta by Michelangelo must be the most important and most highly acclaimed. 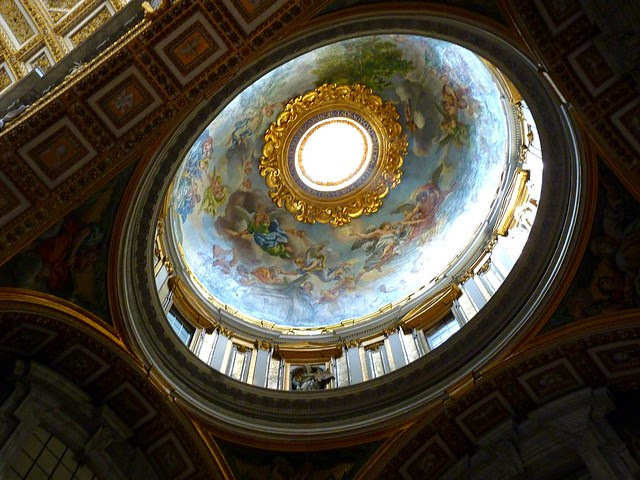 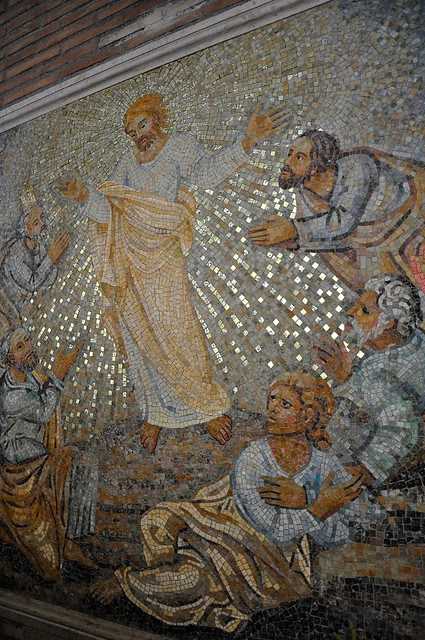 When you get closer, you see that all the paintings in the basilica are made of intricately pieced mosiac, each the size of your pinkie nail. Maybe that's why they can last so long unchanged. 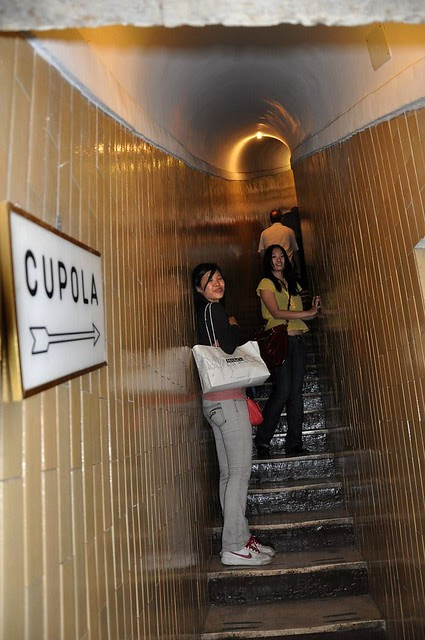 Do not visit the Basilica and not go up to the dome or Cupola. That would be, to say the least, sacrilegious. Most tourists go up the elevator (7 euros each, I think it was) and then climb the 300-odd marble steps, unchanged for hundreds of years. If you want to prove you're fit, climb the 500-odd steps up. Should anything untoward happen, at least you died in St Peter's even if you can't be buried among all the saints and popes. The line going up is again very long, and waiting time was like 45 minutes. Be prepared for very narrow steps in passages that become more and more narrow and tight, almost claustrophobic. I had to stop many times to recover my breath. 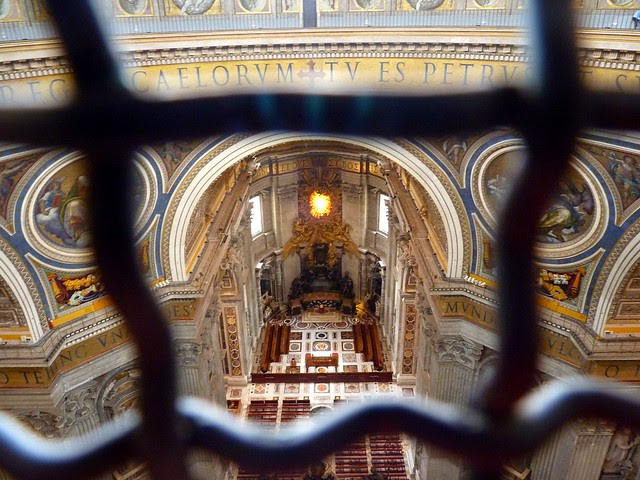 The elevator stops here and you start walking the steps up to the dome. 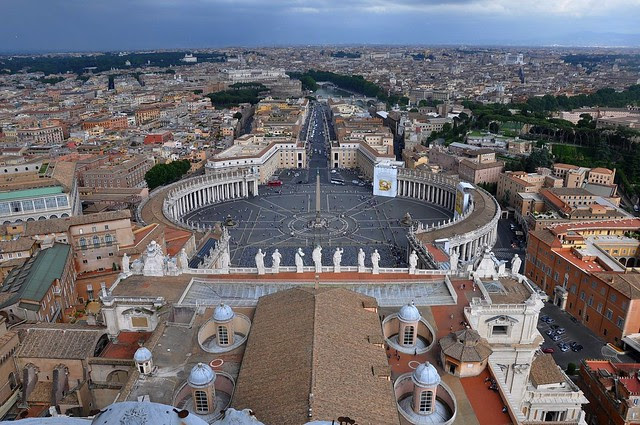 View of St Peter's Square from the Cupola. The line had disappeared but about 4 hours before that, we were standing in line near the white banner on the columns. The basilica entrance is under the statues, so imagine how long the line was. 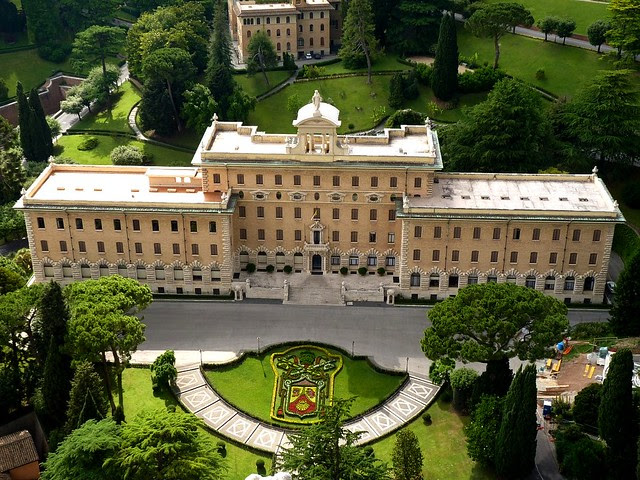 The view from the Cupola. Going down the spiral narrow stairs, different from the flight of stairs going up. When going down, you can't use the elevator. The steps have not been changed although the walls have been re-tiled. 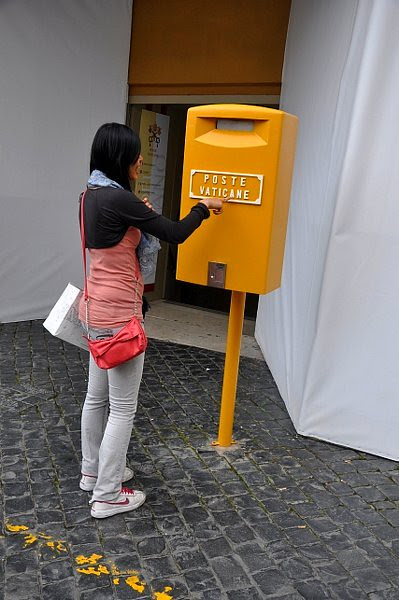 The Vatican exists like a mini-country, with its own police and administrative systems including judicial and postal. 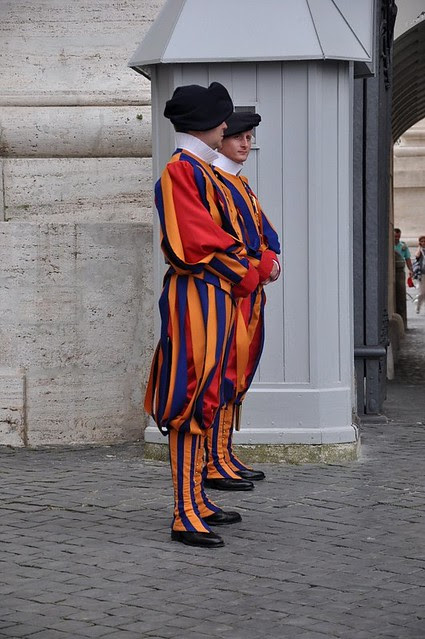 "You going to work dressed like that?"
Posted by terri@adailyobsession at 11:24 PM

I adore St Peter's! Your pics are wonderful. I don't quite agree with your preference for Sagrada Familia over this classic but to each his or her own. Thanks for sharing your adventure.

:)) st peter's awesome and grand but too conventional for me

Thanks so much for your detailed and wonderful description of St Peter's Basilica. I've never been there, but it was like I am there too as I read on. LOL

I have a lot of "Wow" when I looked at your pictures.. so imagine how 'kampung' I would be if I am actually there and looking up at all the statues and the architectural designs.

Someday... I'll go there and be amazed at the Basilica.

Thanks for sharing! L
:)