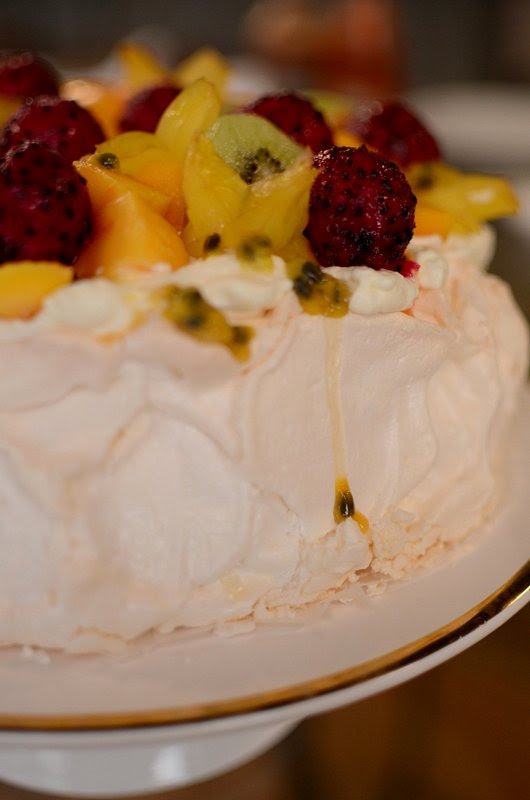 I put this pav into the oven and heard myself say: Please don't fall and please please don't weep. When 30 minutes had passed and there were no signs of weeping, I was quite hopeful that this time the pav would be a success. I was still prepared for it to deflate though. But the pav held its shape and did not spread out like my previous attempts and I knew the chance was good that I finally nailed my first successful pavlova.

It was a joyous moment when I took the pav out of the oven. It didn't sink and the crust was crispy so I was running around like I won the lottery. If I have to fault it, I think it tasted a bit too eggy at first bite.  The crust could be thicker. I also wish that I had made two pavs instead of one for the same amount of ingredients so that there's more crust and so that I can stack the pavs with more fruits in each layer. The pav went so fast--it was my sister's birthday and my nieces loved the pav--that I couldn't get enough shots (photos) of it. 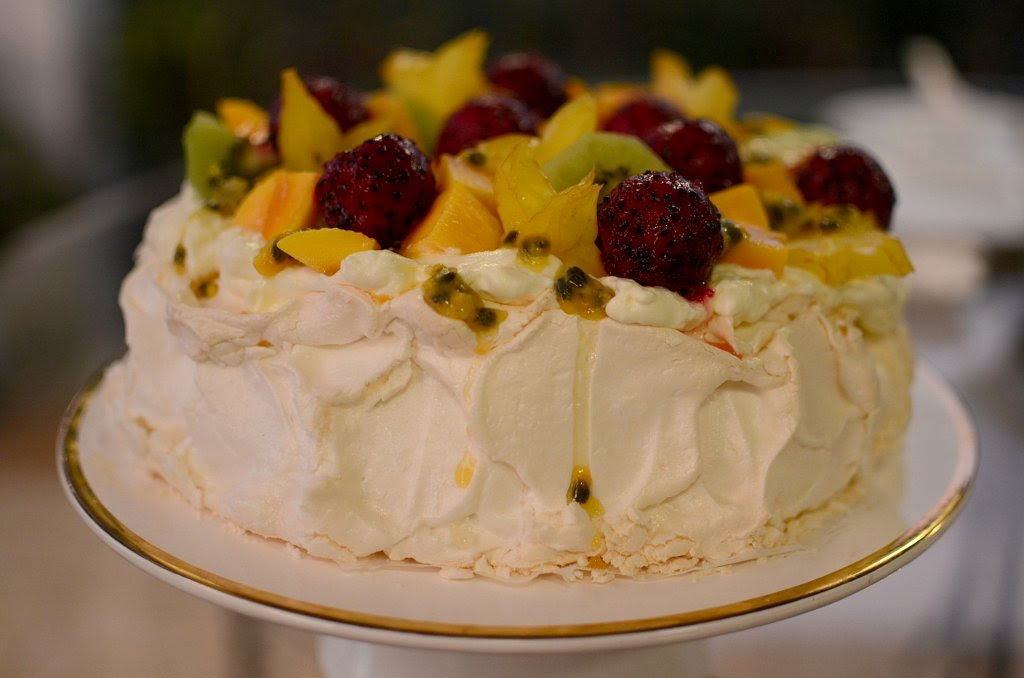 I'm not sure exactly what I did right but I did make a couple of big tweaks:

1) It is impossible to beat the sugar in by the spoonful slowly without over beating the whites because there was so much sugar to incorporate. By the time all the sugar is in, the egg whites are already beaten very stiff.

When Hub got me my Kenwood Major mixer 23 years ago, I spent one Saturday afternoon making about 6 sponge cakes. I WAS possessed. I just couldn't get the sponge right. Each cake went into the oven looking puffed and light but came out flat and hard. Our dog turned its head the other way when the failed cakes were thrown in his direction. And then the light bulb in my head suddenly lighted: the Major is a much more powerful machine than the Chef which I had been using prior to that. Could it be that the whites were over-beaten?

The answer was yes, and the next sponge cake I made was a success.

I figured that maybe it's the same thing with my pavs. So instead of beating the whites at full speed, I had the machine at half speed (4 on the dial) and that gave me more time to add the sugar by the spoonful. I stopped the machine when the whites looked like they had just reached the stiff peaks stage.

2) I have a cool oven so this time, it was preheated to 200 C and reduced to 130 C when the pav was put inside. It baked at that temperature for 1 hour after which the heat was reduced to 120 C for another hour, just to be sure the inside was dried out.

3) I added cream of tartar, just to help the egg whites rise and stay stiff. I also added twice the amount of corn starch to help stabilise the whites. I don't think that these two ingredients made much difference because most recipes do not call for cream of tartar and that much corn starch.

I think that my previous attempts failed because the egg whites were over beaten and couldn't hold their shape for the duration of the baking time. The weeping, I think, was the result of a cool oven as some of you have pointed out. I think the pav needs a hot temperature initially to set the sugar and stop it from seeping out of the meringue. 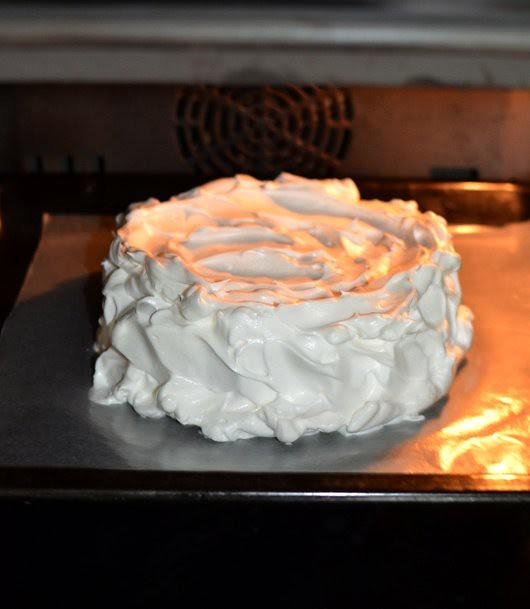 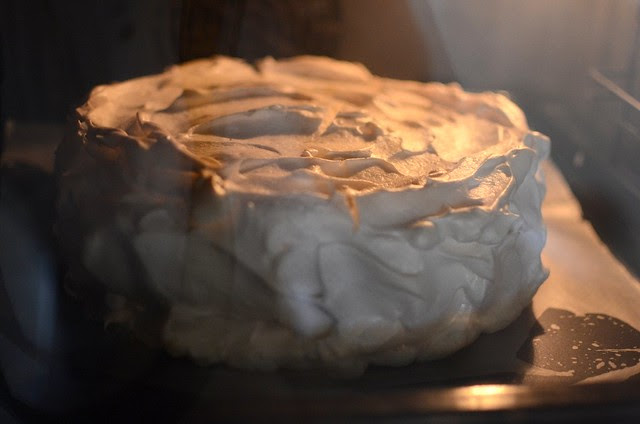 After 1/2 hour, tiny cracks appeared but no weeping. 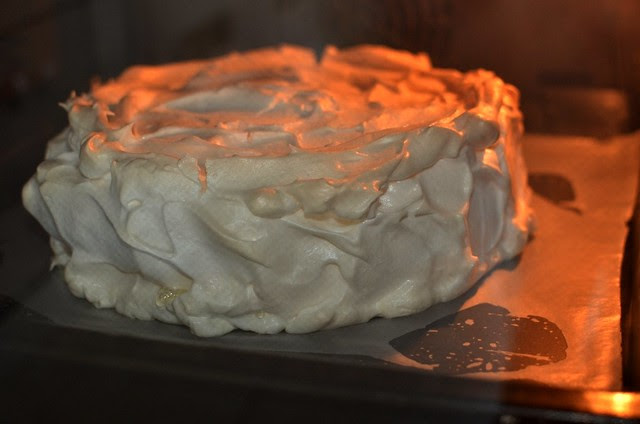 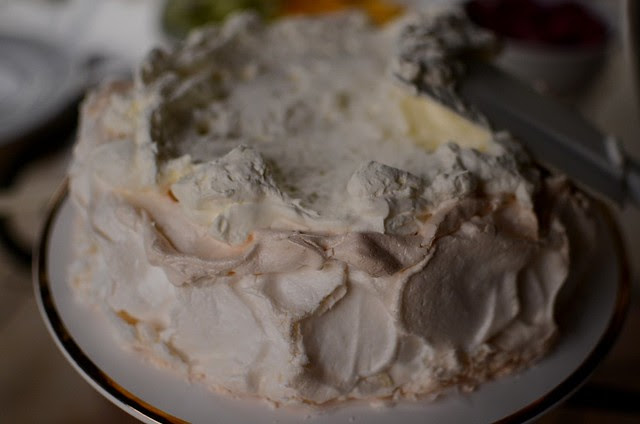 Decorating the pav. Phew. Btw, do not rest your spatula on the meringue when taking photos. The meringue is very delicate and will be compressed.

I was very encouraged by this post by Wendy who lives in Malaysia too. Her pav looks beautiful and crusty, so humidity is not the problem. All pav recipes are nearly the same but I like Wendy's recipe which calls for slightly less sugar, 50 gm for each egg white. Here's my recipe adapted from Wendy's:

Topping: 1 1/2 to 2 cups dairy cream and tart fruits such as berries.

1. Oven at 200 C (each oven is different; adjust accordingly). Put a piece of baking paper on a tray. You can draw a circle of about 8"/20 cm on the paper but I didn't bother.

2. Beat the egg whites until very foamy. Add sugar by the spoonful. If you are using the Kenwood Major mixer, use speed 4 on the dial.

3. When all the sugar is added, the whites should be quite stiff. Sprinkle the cornstarch over the whites, beat for 5 seconds, add the vinegar and the vanilla, beat another 5 seconds or fold with a rubber spatula.

4. Working quickly, shape the meringue on the baking paper, making a slight rim around the pav*.

5. Put the tray with the pav into the oven, close the oven door and decrease the temp to 130 C (I would use 140 C next time to get a thicker crust). Bake 1 hour then lower the temp to 120 C and bake another hour.

6. Switch off the heat, leave the oven door slightly ajar and let the pav cool thoroughly before removing from the oven. I cut the baking paper around the pav; didn't try to remove it.

7. Whip the dairy cream, spread it on top of the pav and decorate with fruits, preferably berries. When serving, remember to slice the base between the pav and the paper so that you don't serve the paper along with the pav.

*What I'll do differently next time is make two thinner layers of meringue because then I'll get more crust and more fruits can be added to cut the sweetness.

Posted by terri@adailyobsession at 9:43 AM

YAY!!!!!!!! for you Terri, I love it when something ou've been struggling with finally comes together. I wouldn't have been so patient, I guess I'll have to try making one sometime. I love your Red lentils soup recipe too.

Your pavlova looks perfect.
I just got my KA and am learning to use it too, finding it difficult to gauge the level of the beaten egg whites as my KA's head can't be tilted, --the hook can't be seen! And my first meringue was overbeaten, after that, I became very cautious whenever I beat egg whites with it and would be watching over it like a hawk. I was so tempted to take out my hand mixer and beat my meringues, but I was also determined to master the art of beating egg whites with my machine. If I ever give in and take out my hand mixer, I'll never learn. What a waste to get a stand mixer not knowing how to utilize. Right?
I used to make this pavlova with a hand mixer, so it's slower than a stand mixer, much easier to control.

dela: yes the feeling's awesome. i am feeling the urge to make another pav, just to see if yesterday's was a fluke. but what am i going to do with all those yolks?!

wendy: yes, it's all in the way the whites are beaten! thnx again for the recipe n post. btw, have you ever been to this blog bc i've never known about your blog until now yet i see you have a large following. so glad i found your blog:) n you know, i've been telling my daughter to sketch me a header tt shows our family in the kitchen n i see your profile pic is just tt!

Now you can make eaton mess.. I love that especially with passionfruit. Adding some nuts is nice too!

Thank you for your explanation and pictures. Pavlova isn't a popular dessert in Hawaii, so I had no idea what the finished product was supposed to look like. Thanks to your post, I now feel like I can try making one.

Wow I admire your determination in getting the pavlova right! If it were me I'd give up after the first few failures!The pav looks absolutely fantastic with the fruits

food: eton mess is made with hard meringue and i'm not crazy about tt but it does sound delicious.

Hi, i've attempted making pavlovas a lot of time but it all came out sticky (not crispy) and deflate, eventhough the temp were 140C, the whites were stiff etc..

I'm not giving up but i dont have any idea how to make the pavlova came out right. Only 2 attempts were ok but it was at my mom's hse. Now I brought her oven to my hse, but still i fail..

Do you think you can tell me where should I improve