Hi. I'm Terri, a food blogger and a self-appointed food writer but I am NOT able to make a pavlova. That's right, I can make a 4-tier wedding cake and pizzas so good that you think only a pizzaiola can make but I can't make a silly pavlova.

Years ago, I tried making pavs and both times they collapsed dramatically towards the end of the baking time.  One hour after baking, right on the dot, the pavs sank in the oven right before my eyes. Twice. Those attempts traumatized me enough to not try making macarons, another meringue dessert. A couple of months ago, at the request of my niece, I made my third pav. Like the first two, the third pav was also dramatic to the end. Instead of collapsing, it wept a ring of sugar syrup around itself. It was also 1/2 the original height. I told myself that I'll never make a pav again. I don't like meringue in the first place and how good can a pav taste anyway. It's just egg whites, sugar and air.

Then a few days ago I had lunch at a friend's house and L brought out a kiwi pav. I was unconvinced at first look because it was rather flat and the color was tan, not white. I shoved a spoonful of the pav into my mouth. Light crusty bite. Soft center. I liked it. No, I loved it. I begged L for the recipe but unfortunately she couldn't recall which recipe she used out of the hundreds that are on the Net. I understand because it happens to me too. I copy recipes and forget to note the source and loose them. At our age, my friends and I are at the point where we often stop mid-sentence "Now what was I saying??" Usually somebody else answers before I do. Sometimes I suspect that my friends are testing me.

With the humidity myth dispelled (it has been extra humid the last 2 weeks) by L, I knew I had to make a pav again. I typed "Why does my pavlova weep?" on my computer and spent an afternoon reading all the comments, including those on forums. Fully informed, I set to work with my newly-repaired mixer (yes, thanks to Yi's friend Kimmei who brought the parts back last week) and the meringue was beautiful. Half an hour into the baking (170 C preheat, down to 130 C during baking), the same thing happened again. Tell me about the sinking feeling! I baked the pavs on wire racks because I wanted the hot air to circulate. Big mistake because the melted sugar made a mess. 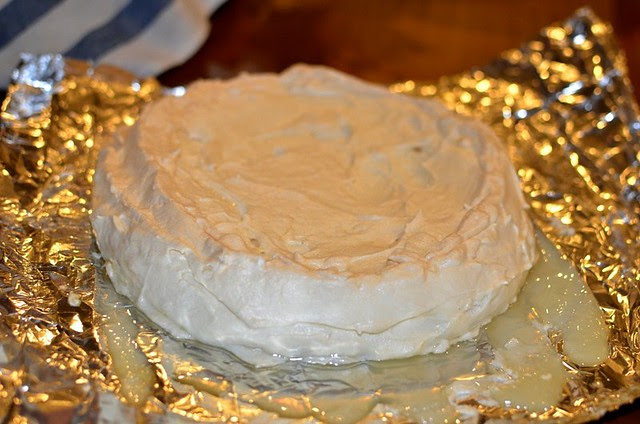 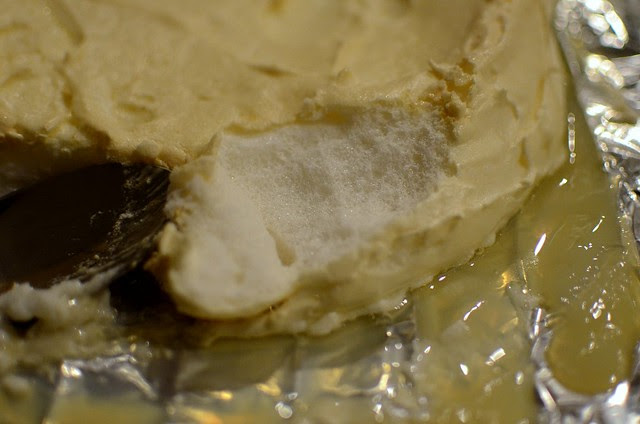 NO. The pavs were heavy and sticky and yukky.

Why do meringues weep? Based on what I read, a meringue weeps because:

2. It is underbaked. I suspect this is the answer because my pav was heavy and sticky inside. But I stuck to the instructions!

3. The sugar must be fine, added to the whites by the spoonful and fully dissolved. I did use castor sugar, added the sugar one spoonful at a time and tested the meringue with my fingers.

4. Too much sugar. I did reduce sugar the first 3 times but this time I didn't.

5. Too little sugar. No way. I used 1/4 cup per egg white, as recommended by every successful pavlova maker.

6. Eggs are too fresh; best results are with eggs 1 week old. Huh?  As long as the egg whites are beaten to the stiff peaks stage they should be good?

I am going crazy. I know I am because I'm going to make my 5th attempt. And I'll keep attempting until I get a perfect pavlova. It has to be high, light creamy not tan color, crusty outside and tender not soft and sticky or hard and dry inside. Wish me luck. If I don't get it right, this blog'll never move on.

Posted by terri@adailyobsession at 4:28 PM

You are one dedicated woman, respect! For me, the disappointment is too great for 2 failed attempts and I normally cannot bring myself to make it again for fear that my fragile heart cannot take it anymore. Hence, RESPECT!

Sincerely wishing all the best in your attempt, you can do it!! =)

that's a mark of perseverance!I've never made it before but now I'm scared to try haha. i hope your 5th attempt works out beautifully, and even if it doesn't, heck look at all the other beautiful dishes you can make without breaking a sweat!

I followed this Nigella recipe twice and it came out perfect for me both times:

it is all about your oven la... the temperature must be right. Not too hot and not too cool. It has to be hot when you put the meringue in.. and maintain the temperature. Use an oven thermometer to get the oven right and if your oven are those that radiate heat unevenly, you gotta know which side is hotter and you need to rotate aoccordingly.

And yes, fresh eggs dont work for meringue. Use at least 3 days old egg whites. Leave them in the fridge and thaw it before using.

Use enough acid agent. I usually use lime juice. Beat the egg white till they are foamy, add in sugar in 3 parts and lastly the lime juice and flavoring..

You also need to use patchment paper or greaseproof ones.. Sometimes the meringue will sink a bit and that is acceptable. Try and try again.

Once you master this, you can try the french macarons..

One reason I never make pav or macaroons. It scares me...but kudos to you for never giving up.I must follow in your footsteps...in other words work up the courage to even try !

Try adding cornstarch, a 1/4 teaspoon per egg white, and an acidic ingredient like vinegar or lemon juice. They both stabilize the meringue and will make the pav marshmallowy inside with a crisp crust. The weeping is because the meringue is undercooked.
I just made one yesterday and it was fine, I used the BBC good food recipe which works all the time for me :) Good luck!

winston: i am like the dog that bite and never let go! i guess i hv the fighting never give up spirit. i think one of my kids has it. guess which one?

shuhan: oh no, pls do try. you never know, you might make it perfect the first time. don't let my failures put you off!

food: you are right! thnkx for the help:)

zurin: you must try make it. i know you of all ppl can do it. try make one!

jaslyn: hi beautiful! i went to your blog and enjoyed the posts on india. i have a niece in chennai right now. hmm...is it worth visiting?? and thanx for the tips. i finally got a pav right last night:)) whew.

I think you visited my friend's site instead of mine, she wrote the post on India :) I haven't been there myself so I can't comment, but my said friend had a great time there!

jaslyn: your're right. you hsd link your site on your profile page! i love your photos n the way you frame them.

here is the science - egg whites need to be 3 days old because of the albumin in them needs to become a little more stretched than out of the chooks bum.

The whisk needs to be a balloon to pump the air into the whites as this is a main ingredient.

The whites need to stand up on their own prior to sugar as otherwise they will be weighed down and the sugar will not dissolve properly.

After the sugar is added and you have, like really stiff, glossy stuff, you need to stabilize the meringue. The best way is using, corn starch and acid - corn flour and lemon juice work a treat but you can actaully use anything starchy and acidic including balsamic vinegar!

Oven needs to be even and you need to bake on a flat tray lined with baking paper. The flat, hot surface will evenly cook the bottom to create the foundation you need to hold up the fluffy stuff. This bottom crust is essential and a flat tray will allow heat to circulate well. 130 degrees for 1.5 hours then cool in oven.

Meringue needs to have a faint colour to it or it will be undercooked and the sugar will weep out. often the top will fall in a bit but this is ok and there is still a lot of foam inside and will be covered with cream.

when you build your pav, make the outside a bit higher than the middle and you will have great crusty sides and it will hold together better. The high sides act like a volcano, protecting the marshmallow during cooking.

1 whisk egg whites in a metal bowl only using a metal balloon whisk (wipe both with vinegar before hand) till standing up on its own
2 add sugar a bit at a time and then put it on full whack and mix till glossy and fully incorporated. (10 mins)
2 add in acid and starch and again full whack for 3 mins

3 line your tray, spoon it onto the paper (metal spoon or spatula only), shape it and bung it in the oven at 130 degrees and forget about it for and hour and a half then turn off the oven, open the door and savour the view.

NEVER put banana on a pav, it ruins everything!