Living here in KK all these years, I've never been to Ramadan bazaars. I can't even give the reason why. Maybe it's because my parents never went to any and so we don't know what we miss.

My son Wey has more Malay friends than I do, since he went to an 'English' school, and they took him to the Ramadan (the Muslim month of fasting/feasting) bazaar in 1 Borneo a few weeks ago. That opened his stomach to ayam penyet and kuih muih and he came home asking why we never go to Ramadan bazaars. Since then, we've been to the Asia City bazaar three times and the Lok Kawi bazaar once. I prefer the Asia City bazaar because of the variety and better quality than the Lok Kawi bazaar, which was stinky and dirty and most of the food already packed, with tons of flies swarming around. In the Asia City bazaar too, it was flies galore and that took much of my appetite away. The heat was sweltering and just walking for 20 minutes left me  exhausted and drenched with sweat. 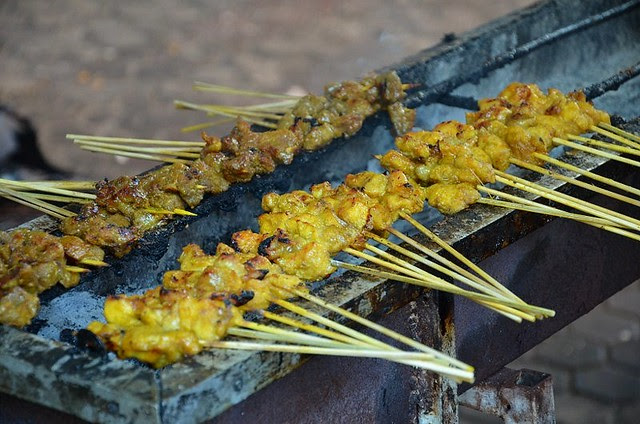 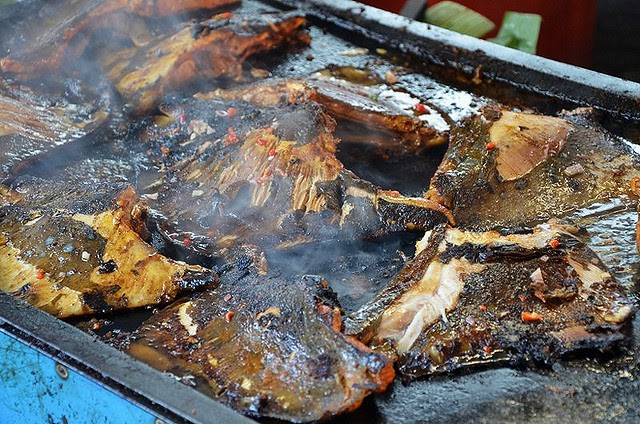 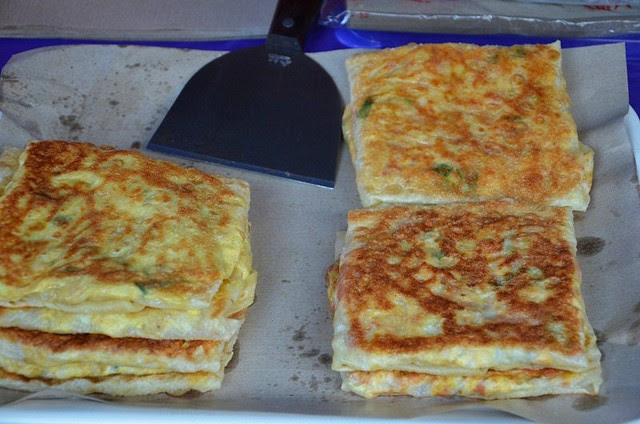 Murtabak. I ordered one and it came covered with a sweet orange chili sauce that was awful. 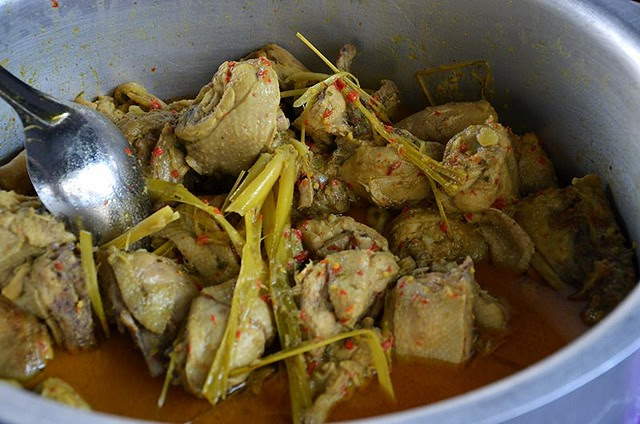 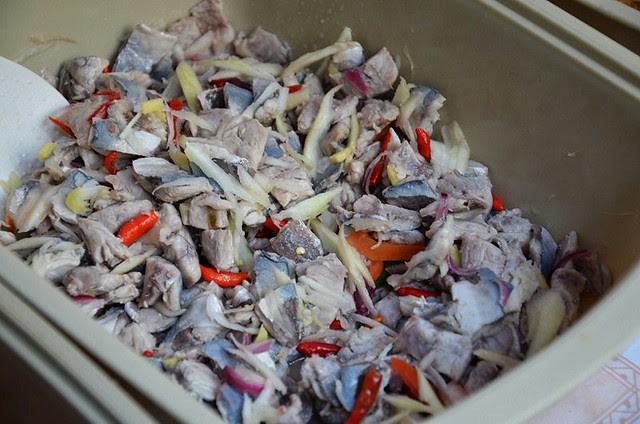 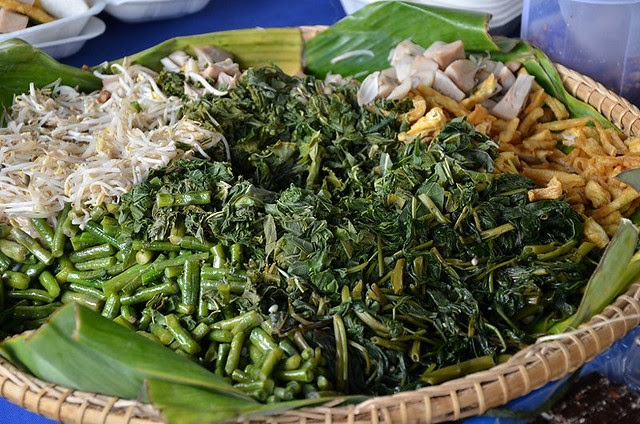 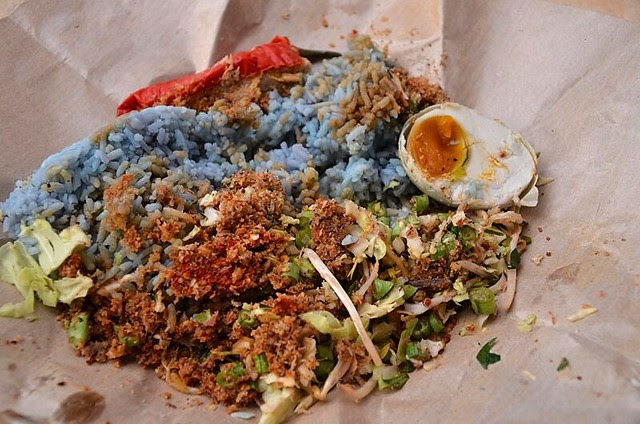 This was what we went to Asia City 3 times for. Nasi kerabu, the rice colored blue by the blue pea flower/bunga telang. Chili sauce, raw bean sprouts, long beans, bunga kantan, mint, daun kesom, fried grated coconut, half a salted egg and a mackerel stuffed chili made this an awesome dish of complex flavors and taste. 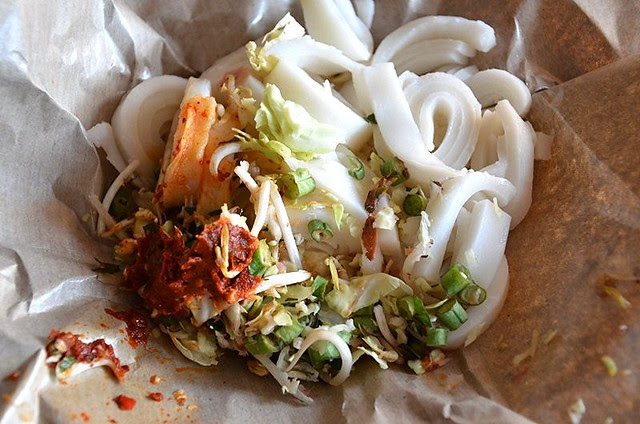 Laksam, a rice noodle dish from the state of Terengganu. 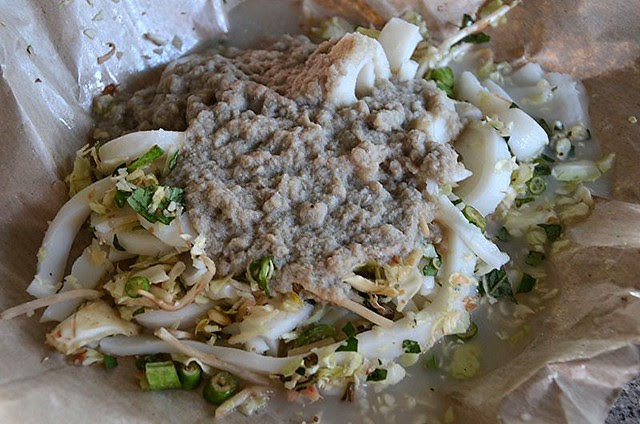 Ew-looking fish and coconut gravy goes with the laksam. Not exactly to my taste although I will eat it if I'm hungry. 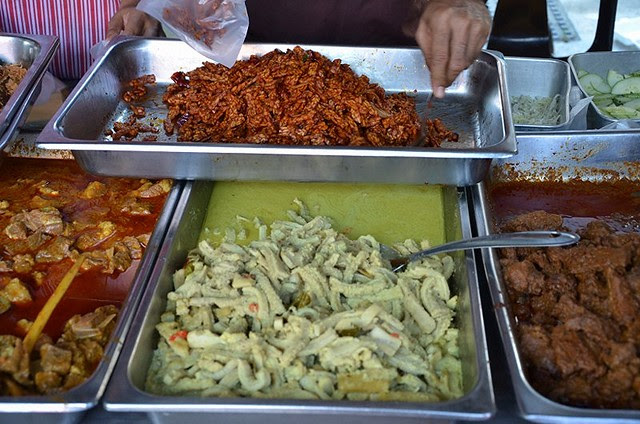 Tempeh (where the hands are) is a delicious soya bean dish of Indonesian origin. 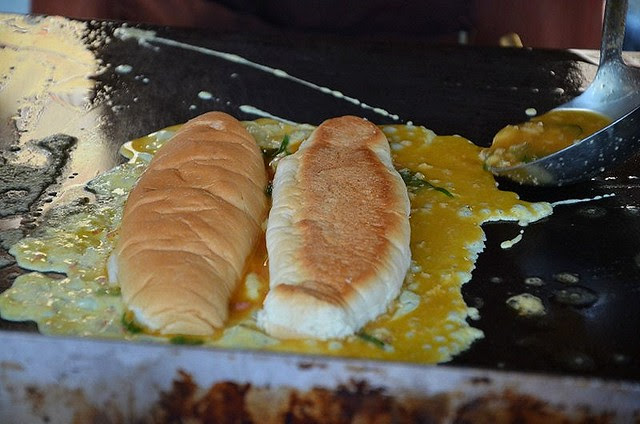 Roti John, something I've never eaten before and refused to try because smell of cheap margarine--I wonder which brand it is--made me shudder and nauseous. 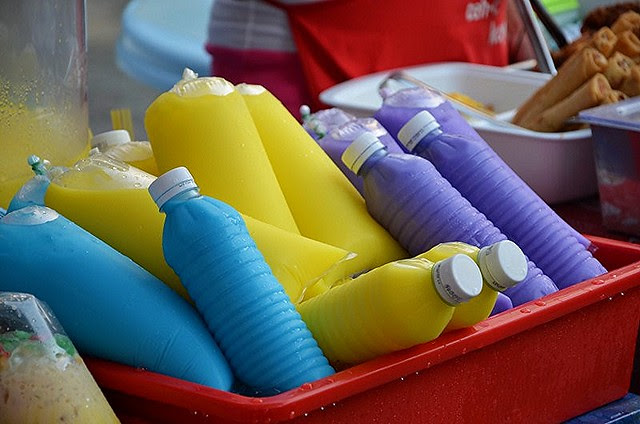 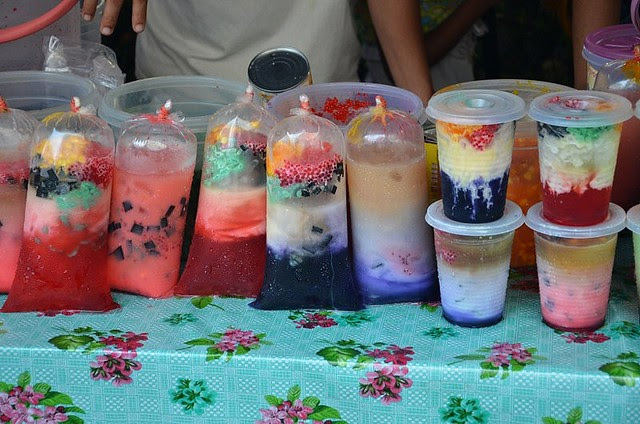 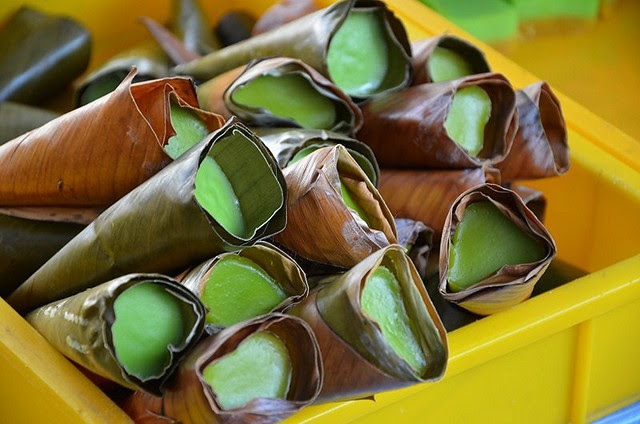 Unfortunately, these were tasteless because they were made with artificial coloring, artificial pandan extract and either little or canned coconut milk. 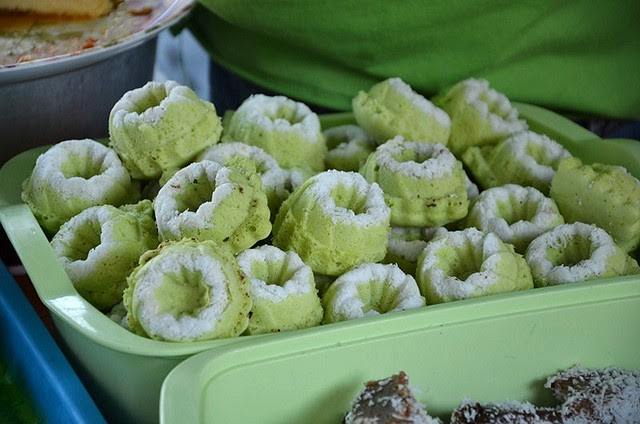 Puteri Ayu (Princess Ayu) are little pretty pandan-flavored sponge cakes with a rim of fresh coconut but these were bland, with hardly any pandan flavoring. What a pity that traditional kuihs have now become totally adulterated and awful tasting. 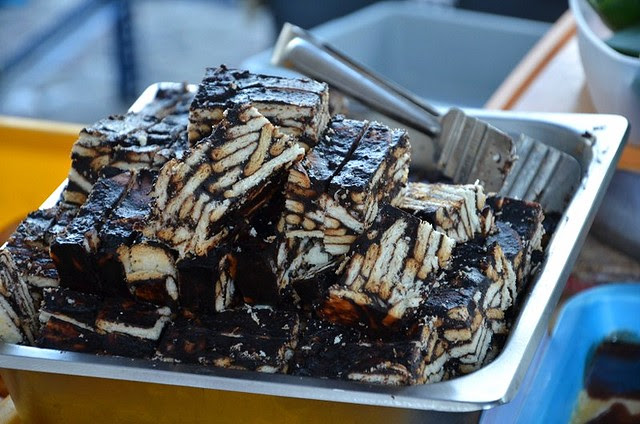 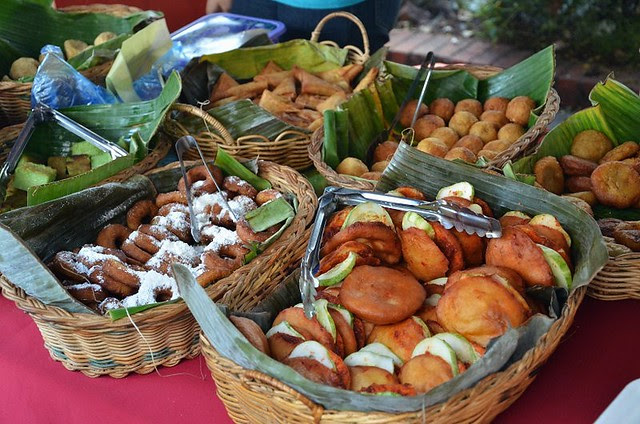 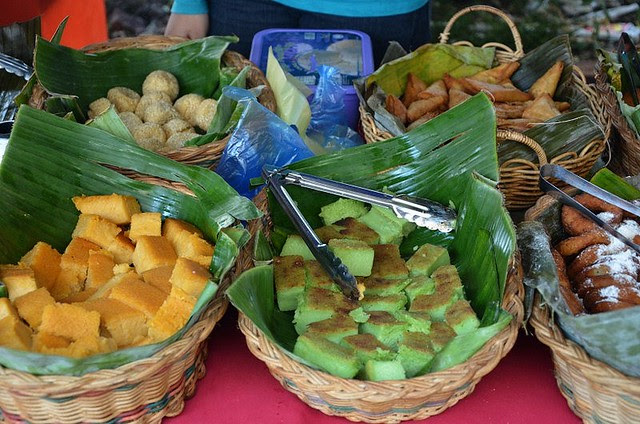 The following are photos taken at the Lok Kawi bazaar: 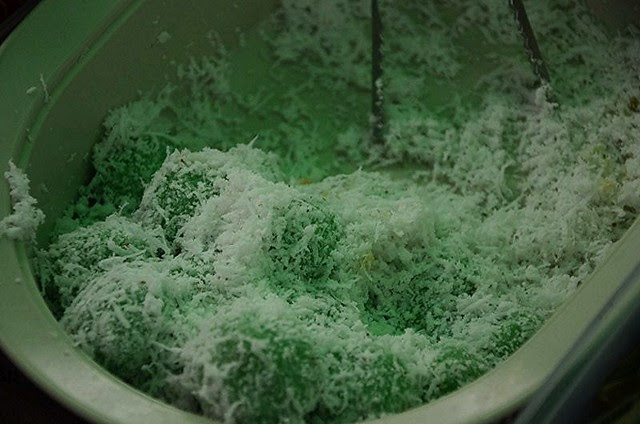 Wey had to buy the greenest ondeh ondeh in the market. The gula melaka inside was sourish, he said, and tasted of cough medicine. Serves you good I said. 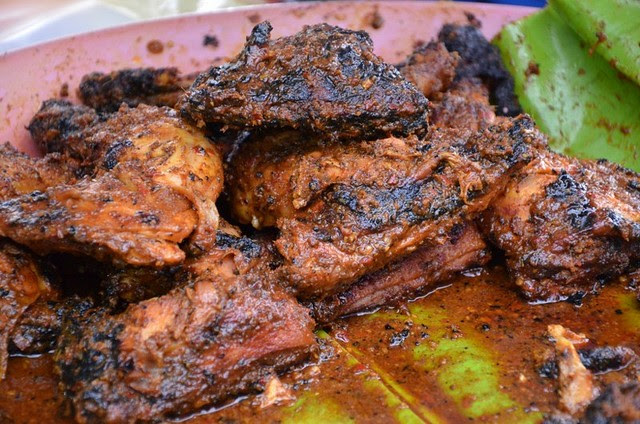 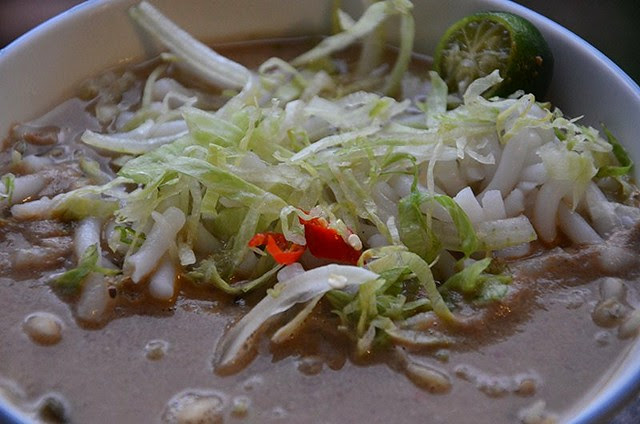 The vendor said this was Johor fish laksa, rice noodles with fish soup. It doesn't have as much spices and flavors as Penang assam laksa but it was tasty.

One more day before Hari Raya and 12 months before the next Ramadan bazaar...
Posted by terri@adailyobsession at 11:24 PM

Wow!!The wide varieties of food and kuehs make me hungry and homesick. Thank you for the wonderful pictures. Theresa

Wow, you make everything looked good!

Hey Terri,
This is way cool! Check it out: A portrait of a chef composed from food and cutlery.

As usual colorful n greasy. Hv you tried sri keningau putatan? They always hv nasi kerabu but everything comes with lots of flies too and watch out for the soup that comes with everything you eat. A heaped teaspoon of msg goes into every bowl....

Kuching has similar thing going on at Satok. Walked around there couple of years ago. Some foods are pretty good and really cheap

I guess it is the vibe of whole place that is such a stark contrast to the food court in shopping mall and makes them somehow endearing.

Yeah,tis year not in the mood of visiting bazaar Ramadan too. Just too.......unreal. I mean,the whole feel is not there,as most of it too business -profitable selfish foods,which is tasteless ,full with ICI,MSG,and the additional "on-the-spot" fliesorious. But,if I were to crave for Malay kuihs,I always go to Kak nong,but just for her kuih pelita and ondeh2,which I find is still the best and with ORIGINAL flavour.....

OMG! I love nasi kerabu. My mom made the best nasi kerabu, Penang Nonya style. I grew up eating it, but the last time I had it was more than 20 years ago. I have lost the desire for Penang laksa, Penang "lam mee", etc, but I still miss nasi kerabu.

OMG, I can't stop laughing when I got to the "ICI paints"

This means that you literally burn fat by consuming Coconut Fat (including coconut milk, coconut cream and coconut oil).

These 3 studies from large medical magazines are sure to turn the conventional nutrition world upside down!