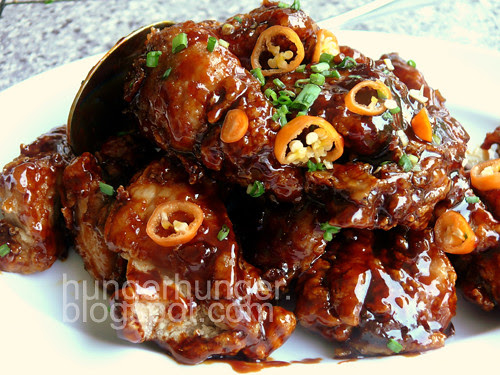 As a kid, I had poor appetite and was skinny and anaemic and my mom would have bottles of Marmite and Bovril at home as prescribed by the doctor. These two very British spreads are still easily available here, even in little grocery shops, and they are the result of Sabah's British colonial rule in the 50s. If you come into my kitchen, you will always see Marmite and Bovril on the counter, in the biggest bottle they come, 470 g. They are as essential as soy sauce and cooking oil and I make sure I'm never out of them. People have comfort blankets, but I have comfort condiments.

Which do I prefer? I'd have to say "Marmite!" even though I do love Bovril too. Sometimes, I'd take a teaspoon of the stuff and eat it just like that and feel comforted that I've had my Vitamin B complex for the day. Truth is, besides the nutritional goodness, I love the salty-savory-sourish taste of Marmite. I love it on bread, on crackers, in my congee, in my noodles and in my rice. I stop at drinking it though. That would be strange, sipping a cup of steaming Marmite.

The Australians and NZders have a vile version of Marmite called 'Vegemite'. I shudder when I type this word, Vegemite. It shows that you can be so close yet so far, even in taste. If I had to , say, pledge citizenship allegiance to Australia by eating Vegemite, I'd fail. Back to Marmite. Do you know why Marmite tastes so good? Marmite is made from yeast extract, a by-product of the beer making process (another plus) and it naturally has lots of glutamic acids, a non-sodium form of monosodium glutamate, those magic chemicals which perk all savory food up with that extra xien/umami taste. For more info on Marmite, check here. For more Marmite recipes, here's the official Marmite site. 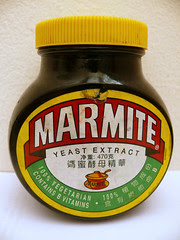 Marmite is good enough to eat as it is, but in Malaysia, Marmite lovers use it as a condiment. I've never tasted a good restaurant Marmite chicken or prawns. I think the cooks are too stingy when it comes to using this ingredient and as a Marmite lover, I want to taste the Marmite, not the soy sauce and sugar. The great thing about cooking a dish yourself is that you can add as much of any ingredient as you like. This recipe doesn't make a shy Marmite dish: I used 2 1/2 tablespoons of the stuff. The dish is intense in flavor and taste and you just need a good soup and a plate of garlic fried greens to complete the meal. The sauce is sticky and especially good with plain rice. Hub said "Hmmm!" at first bite and Wey didn't complain like he did earlier when I was frying the pork. He doesn't like sauce-coated fried stuff and thinks deep-fried food should be eaten as they are, nice and crunchy. But tonight, he actually ate most of this dish. I saw the original recipe in a magazine and made some changes, to my convenience and taste, such as doing away with the chopped onions and chili sauce, replacing Chinese black vinegar (partly for the sake of those who have no idea what Chinese black vinegar is) with Worchestershire sauce for a more tangy taste and black soy sauce for a deeper color instead of light soy sauce. Marinading the meat before frying it also made it tastier, and the egg white helped the cornflour to stick better so, yes, this is a winner and I'm inspired to do a similar dish with Bovril and beef.

update: I just made marmite prawns and find them simply the best, better than pork! 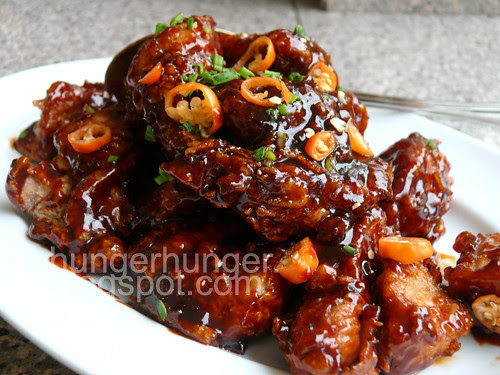 Marmite Pork
500g meat*
1 egg white
dashes of white pepper
1 T light soy sauce
1/8 t salt
--marinade the meat with these ingredients for at least 1 hour. Alternately, you can use 1 T of the Marmite sauce below to marinade the meat, but add the egg white.

* you can also use lamb, pork, pork ribs or large prawns with shells on, chicken boned or with bones

3. Coat each piece of meat with the cornstarch (you can shake them in a plastic bag) to cover completely, shake off excess.

4. Heat up 2 cups of oil in a wok and deep fry meat in medium heat until golden and cooked. Blot on kitchen paper.

5. Pour all the oil away, wipe the pan or wok with paper towels to clean and add the sauce ingredients. Let sauce cook at high heat until it is very thick, then add the fried meat pieces, tossing well until the sauce is all absorbed by the meat. Remove onto a plate & sprinkle some sliced hot chilies for extra oomph. Serve with plain rice. Eat with fingers.
Posted by terri@adailyobsession at 6:37 PM

My oh my oh my~~~ Let me have a bite pleeee~ase! I love Bovril but my mum always forbids me from taking lots of it. I would usually look forward for plain porridge coz l want to add lots and lots of the sticky yummy into my porridge and please, l don't want anything else to go with the porridge!

mmm... this look absoulately yummy! I will need to get my hands on a bottle of marmite and try this recipe! thansk for sharing!

you've inspired me to buy some marmite and try out this dish! also, i made your mapo tofu this week, wonderfully spicy, although i can't get the sichuan peppercorns in the US.

looks great! i'm in Hawaii and do not ever recall seeing "Marmite" in our stores here.... is there anything that can be substituted?

Marmite is an useful ingredient in cooking. I've not tried any up to this moment, but marmite pork and marmite chicken is my favorite when dine out.
Yours looks great!

oh boy ! I just had salad with Bovril ! :D
The photos actually make me "swallow my saliva"

i have never in the world seen a marmite dish. i always thought they belong on bread and crackers. cool. i am trying this next week. thanks!

yeah this reminds me of the vegemite on toast days..in australia..

simplyjune: welcome, it IS yummy.

junathon:if ur not a marmite lover, use a little less of the stuff. btw, mr brady's handsome.
w/o the sichuan peppercorns, it wouldn't be ma po tofu. i'm sure the asian grocers have it. the first time i came across sichuan peps was in washington (state), more than 25 yrs ago!

little in box: try it soon. the frying part is a bit troublesome, but worth the effort.

denise: u've got to tell me the recipe for marmite salad, i've never tried tt!

marmite is my favorite. used to be bovril younger days. then bovril was off the shelf during the MCD period so it was marmite for me and now marmite stays. always grab the largest bottle and once it is down by 50%, i will grab another bottle. I love it with bario porridge and that's the only way i will eat my porridge. Tried vegemite...taste more bitter and my tastebud do not go for it. Love that photo of marmite in your blog. thanks for marmite sharing...chrish

Woh! I also used this marmite to cook in chicken wing before, but the sauce I got a bit different with yours, I used honey & maltose,the taste is good!

your marmite pork looks awesoem, if you open a restaurant I will defintely fly over to be your first customer! :) so yum yum!

can i ask.. y do you only put egg white when you marinate the meat, i know the purpose is for sticking the flour before you fried but what difference it is by putting the whole egg (white and yellow) then egg white only?

cherry potato: i am sure it was good!

bbo: why wait for me to open a restaurant? u can still come over here

krizz: my MIL always taught me to use egg whites only when deep frying bc the yolks r rich n oily n can cause d batter to turn thick n flat...don't know how true, but i stick to tt advice :)

I have Marmite sitting prettily in my fridge. Normally I spread it on bread for breakfast. But your blog gives me an idea - perhaps I'll try out your recipe one of these days. Thanks for sharing! :-)

I made marmite pork ribs for dinner yesterday. I was a bit inconsistent in preparing marmite pork rib. Sometimes, it turned out great and yet sometimes it didn't turn out the way I like it.

Hello! I see that you are based in KK but when you are in KL next, try this place called Kanteen in Plaza Damas in Sri Hartamas. They have a pretty good Marmite Chicken (ya unfortunately it's a pork free restaurant).

I'm planning a trip to KK in early December. Where are some of the best places to go eat?

Hi! I stumbled onto your blog from google. Just tried this recipe tonight (double up since I was cooking with 1kg pork). Everyone loved it! :D I did use a teeny bit more sugar though as I prefer it a little sweeter, but nevertheless it works out very well!

Thanks for the recipe. :D

Btw, if I'd like to use pork ribs instead, do you have tips on how to make the meat more tender (comes off the bone easier). I remember from previous experience of deep frying pork ribs, it turned out to be very tough!

ashley: so happy tt you like the recipe. you can use baking soda (bicarb of soda) to tenderize the ribs but i don't do tt because the baking soda takes away the taste of the meat.

Hi, where can I get marmite here in Australia?

What does "T" stand for? Tablespoon or teaspoon?

Hi, when you mentioned "For frying: 1 cup cornstarch + 2 cups veg oil", can I just confirm with you if it means 1 cup corn flour or I have to mix the corn flour with water?

Capital "T" is always tablespoon, while lowercase "t" is teaspoon.

Corn flour is actually corn starch if you're from the US. It is used as a dry coating, no need to mix it into a wet batter with water.