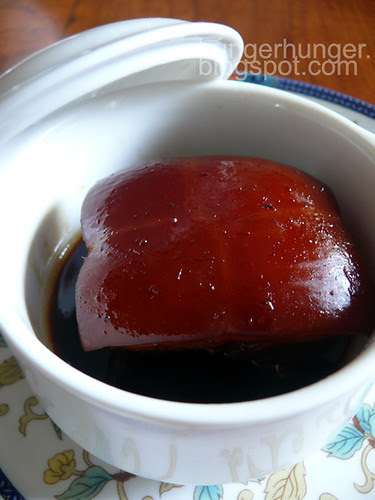 Imagine eating a piece of the fattiest pork belly that has been braised and steamed in a soy and wine sauce for 4-6 hours until it barely holds together. What you need is courage, and an Anthony Bourdain kind of reckless passion for food. I failed the Dongpo pork test, twice.

The first time I encountered the real thing was in Hangzhou, in 1999. We were on a 9-day tour of the Zhejiang and Yangze Delta region of China which include famous classic Chinese cities like Suzhou, Wuxi, Hangzhou, Nanjing and Shanghai. And Beijing, because that was our entry point. At each of these cities, we were served the local specialty. In Wuxi, it was Wuxi pork ribs (sublime!). In Hangzhou, it was Dongpo pork.

The waitress placed a small bowl covered with a lid in front of each of us. As each person took the lid off, the reaction ranged from dismay to disgust and all of us put the lids back on, refusing to eat the piece of fat in the bowl. All, except one guy at our table of 10. He took a pair of chopsticks and lifted a tiny morsel of reddish-brown wobbly skin and fat and slipped it into his mouth. He closed his eyes, shook his head slowly and went, "Oooo..". Back his chopsticks went, picking on the piece of fat and skin with pleasure, while in between mouthfuls he teased us about missing out on the most heavenly dish ever cooked. To this day, I can remember that piece of Dongpo rou. It was a square piece of braised pork fat and skin, nothing less. There was only one thin layer of meat, about 2 mm, that ran horizontally across the fat that was about 5 cm high. Only the fattest pork belly is suitable for cooking dongpo rou because Dongpo rou is all about eating the fat, not the meat. It was food shock for us.

Su Dongpo was a great Chinese poet who lived about 900 years ago. Born in Sichuan but famous for his work as a govenment officer in Hangzhou, Dongpo came from a family of highly educated parents and siblings who were all poets. Dongpo not only waxed poetry, he apparently could cook too because he is credited for creating Dongpo rou (Dongpo's meat), one of the most famous dishes in Hangzhou. Apparently, Dongpo came up with a revised version of hong shao rou (red cooked meat), a dish that is to the Shanghainese as Yorkshire pudding is to the British. Basically what the guy did was instead of putting the meat into a pot of boiling soy sauce, sugar, spices and wine as is done in red cooking, he took the extra step of caramelizing the sugar and frying the meat in it before stewing it in the pot of soy sauce mix, then steaming it for hours until it melts in the mouth. By doing that, the reddish-brown color of the pork comes more from the caramelized sugar than the soy sauce whereas in red-cooked meat, the color is from the soy sauce.

The longer you stew or steam the meat, the less oily the pork is said to become because the oil will seep out, leaving the de-oiled fat, if that makes sense, so that the Dongpo pork doesn't feel or taste oily even if you eat the fat. To me, the fat didn't feel that oily because it wasn't like fat anymore. It was so soft that it melted on my tongue. But with great humbleness, I think Dongpo should've deep-fried the pork skin, then braised and steamed it. I'm referring to the canned Maling brand of super delicious stewed pork belly with the crinkly skin that is banned in my house because it's all skin and fat. Anyway, I've satisfied my curiosity about Dongpo rou, so I can now move on to the next food adventure. If you have the stomach for it, literally, try it at least once in your lifetime.

I bet that Dongpo must've died of a heart attack. 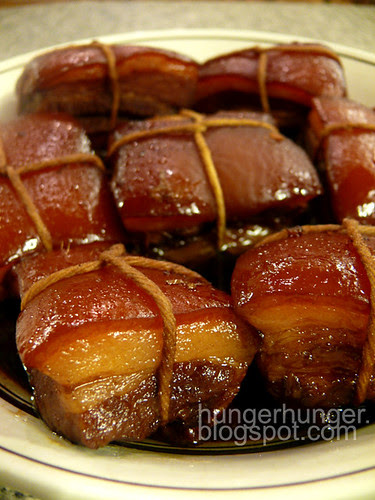 The pork cubes before steaming.

1. Pour boiling water over the cleaned pork belly in a bowl to remove any smell and dirt. Drain, cut the pork belly into 7 cm squares. Tie each piece of belly with the string so that the meat keeps its shape andstays intact.

2. Put the oil into an unheated wok and add the sugar, cooking over low heat until sugar has dissolved. Add the pork and stir well until the sugar turns yellow. Turn heat off.

3. In a medium-sized heavy based pot, put all the following and let it come to a boil and simmer for 5 minutes:

*The Dongpo pork flavor depends very much on the quality and flavor of the soy sauce used so be sure you use one that's good.

4. Add the pork pieces & sugar syrup into the boiling sauce, reduce the heat to low and let it simmer for 1 1/2 hours. You can adjust the seasoning of the sauce at this point but remember that the sauce will thicken and be saltier.

5. Put the pork pieces and sauce into a big heat-proof bowl or dish and steam for at least 3 hours. If kept overnight at this point and re-steamed for another hour or more the next day, it's even better. If the sauce is thin, pour it into a small pot (without the pork) and heat it on high to evaporate and thicken it. Pour the thickened sauce over the pork pieces to serve.

Posted by terri@adailyobsession at 9:13 PM

yum, yum.... makes me think of all those wonderful foods in Hangzhou.

I had these in HangZhou, it was nice but you can visibly see the big lumps of oil makes you feel.... UGH!

"I bet that Dongpo must've died of a heart attack." HAHAHAAH! He did died at around 64 years old though so your bet may hold some water :p.

eat it with steamed Mantou-best in the world!

TERRIIII!!!! Goodness...am drooling madly now. While I love eating the fatty part, I wonder why pigs in China are wayyyy so fat.

anon: me too, i miss china chinese food:(

simplyjune:i'm not drooling over it...i think it was fat overload

agnes: did u eat it tho?

foodbin: i saved some to make dongpo burger!

pp: i am the one drooling over ur humen post! the chinese eat pork fat, whereas we discard ours, excpet for jee yow ja, n they specially breed their pigs to make them obese.when i took my china girls to the market, they's look for the fattest piece of pork to buy n i just couldn't let them, n in the end we had to compromise..

OMG, I still can't make myself do it !!! Many times I was tempted to pick a tiny piece of fat to try but.... If I have to eat this, it'll be only the lean meat at the bottom.

Terri am loving the pork features! Pork overload is never a bad thing! And it actually seems easy enough for lazy cooks like me :D

hi aunt terry. will n i once had dongpo pork - abt 6 squares between the two of us. it was great. but we became literally n figuratively sick tt night, after all that fatty goodness =P

"I bet that Dongpo must've died of a heart attack."

you so funny, mummy!

This is my fave. Like to have those that vibrate in the waiters' hands.

I love Dongpo pork but I'm not prepare to be died of heart attack, lol ! My dad makes pretty good dongpo pork but he's not allowed to make in summer unless special occassion. I just can't let him spoil my diet and feel guilty afterwards

ganache: i know, i know.i too just eat the meat. n some skin :D

yi: u know me n my lame jokes.

denise: he's taking me too much for granted tt boy

chumpman: we seem to eat similar food, ur parents being shanghainese?

ekeng: hey, u still reading blogs?? have u found the answer to making lacy tempura? i'll make u dongpo pork if u give me the secrets

I'm not usually fussed about the length of cooking, it's the number of ingredients that have to go in a dish that usually has me stressing - esp for hard to find ingredients.

terri, i love this dish, my gf is from hangzhou and I insist on having it everytime we are there, you can get it at any restaurant..I know its rich and fatty but the taste is just unbeatable. the food and restaurants in hangzhou are just amazing, i wish more of this type of chinese dishes opened in our western city restaurants...they would make a killing

I ran across your recipe online and tried it - delicious!!! One of my favorite dishes and now I can make it at home - thanks!

Your Dongpo Pork photos look so delicious. Will try this on the weekend. Thank you for the detailed recipe.