I have little knowledge of Xinjiang food and I've only tasted Xinjiang bbq kebabs (yummy) and bbq brinjals at little streets stalls in different parts of China. If you see medium-fair-skinned fellas with Muslim skull caps looking like Pakistanis and they are selling bbq meat or even pelts, you can be sure he's from Xinjiang, which is an autonomous region of China, like Tibet. And don't talk to him in Urdu because he can speak better Chinese than you although he'd try to pretend he doesn't.

The predominant spice used in Xinjiang food seems to be aniseed (which is different from star anise) and cumin and not chili powder. The preferred meat is mutton. Like I said, I haven't tasted much Xinjiang food but I think I'd love to visit their capital Urumqi and taste their kebabs, roasted mutton, hand-pulled noodles, bread and whatever else they have. But I will not drink their goats or yak milk tea. Ew.

Moon Bell is the only Xinjiang restaurant in KK, the other one in the Waterfront having closed some time ago. Shan loves the place, and when I got to the restaurant last Saturday, Karen the restaurant owner said Shan had just left with a bag of 'stormsand chicken'. Shan has been raving about that dish. 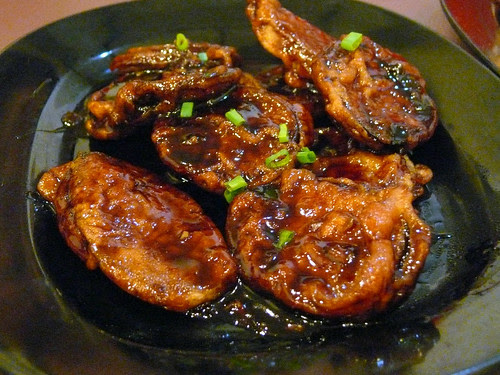 We started with pieces of stuffed brinjals (eggplants aren't popular here as most people prefer brinjals which are softer and suitable for frying) that were coated in a thick sticky sauce that didn't soak into the fried eggplant, leaving it still crispy. I liked it. RM10/RM3 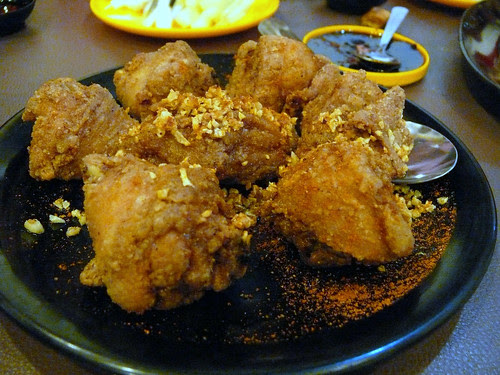 I was torn between the first item on the menu, da pan ji (big platter of chicken), which is one of Xinjiang's most famous dishes, and the stormsand chicken. (I wonder if they mean sandstorm, seeing that there's deep fried crispy garlic and paprika scattered all over the plate.) In the end, I ordered the stormsand chicken. It came straight from the fryer, crackling hot. The cumin -flavored coating was crispy and fragrant and the flesh was moist and tasty. I love this too, Shan, and I'm going to make some myself. At RM15/US$4, there were only 7 pieces of chicken, not exactly expensive but not cheap either. 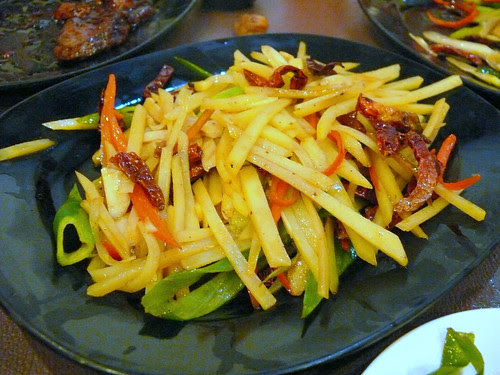 Chili fried potato sticks was next. This reminded me of a dish the Chinese students had cooked for me, except that there is more chili in this dish and a faint flavor of cumin/aniseed. It went well with or without rice. I think many of us here will not have eaten stir-fried potatoes, which is common in China. RM8/US$2 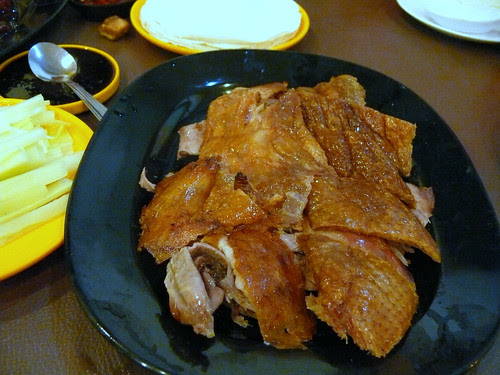 This is a half portion of Peking Duck looking like a quarter portion, RM35US$10. A full portion is twice that price. Traditionally, Peking duck is served 3 ways: firstly, the skin is served with wheat flour pancakes, then a second dish of stir- fried shredded duck meat and lastly a soup made from the bones. Moon Bell does this as well, but not for the half portion. Bummer.

Peking Duck is a fancy dish, served with fanfare in restaurants that bother to have it on their menu. Even if it isn't given its superstar status, like in King Hu, it should at least look like Peking Duck, with reddish-brown shinny crispy skin. Moon Bell's version looks more like Shanghai crispy pepper duck (which Hub's aunty cooked for us on a visit here 18 years ago; another post). The skin was crispy and the meat dry (unlike Peking Duck) but it was quite tasty so if I were Karen, I would re-name this duck Xinjiang duck or something because it just isn't Peking duck and customers will not be impressed. And I would definitely give a second dish for the half portion. And make the half portion half, not quarter. 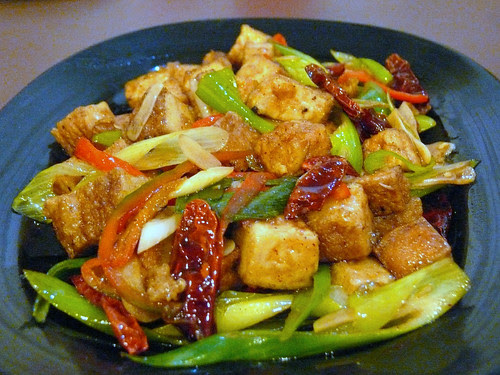 Hot and spicy bean curd cubes. This is quite similar to Sichuan cuisine except that there's no prickly ash (Sichuan peppercorns). Another good with rice dish, but for those who are used to saucy dishes, this may not appeal. RM10/US$3

My in-laws had the hand-pulled noodles but I didn't take any photos of that. I did, on a whim, drop by again the next day to try the noodles but this time I'd left my camera home. I wouldn't recommend the noodles. The noodles portion was very small (a handful) and there were only 4-5 paper-thin slices of beef that were each as wide as my thumb. The noodles were el dente but other than that, just like the soup they came in, they weren't special. For that, you have to pay RM10 per bowl.

Moon Bell's Xinjiang dishes are a refreshing change from the usual Cantonese food in most of our Chinese restaurants. I like that they cook the food upon order so every dish comes hot and fresh but some items may take a while. The restaurant is casual and the dishes are not suitable for banquet-style dinners and people/in-laws/old folks not used to anything but local Chinese food and so the place is best for a casual meal. While the prices seem inexpensive, the portions are not big either.

(the restaurant has taken over the Nam Hing shoplot)
Posted by terri@adailyobsession at 7:01 AM

for a moment the duck looked like crispy roast chicken..kinda small..

Yay you finally made it Terri :D We had the lamb the other day and it's got those herbs and spices on it that you mentioned in your post. a little salty but I liked it.

And that chicken rocks. Tapau-ed it with their semi-wild rice and lots of garlic oil. Yum!

stormsand chicken. haha ... what an apt name. but befitting, nonetheless.

I love the brinjals dish too! A must have whenever I eat there!

the dishes sure looks tasty

looks exotic to me, but would love to try!

I love the duck so much,so YUMMY.
But, now seldom go there coz hard to get parking...

Hmmm looks good would love to try it one day =D

shan: i'll def go back to check out other items on their menu

jacq: u've been there already...

foodbin: yes, but not all items

kbcg: am sure u get xinjiang food in kl too

muimui: right, parking is a BIG problem there

agnes: do try it

Good diversion from the ordinary. He stormsand chicken must taste real good.

tried the Stuffed Brinjals before..but i wondering where is the stuffing? Haha...Love the soft shell crab at there. Taste awesome. but dont have mayo dipping..very disappointed.

worldwindows: it's fried chicken with cumin really but done to order so it's very good.

ekeng:ha, i know, the stuffing is almost not there but it's not hakka stuffed brinjals. i'm not very into soft-shell crabs bc they r always deep-fried n heavy with oil but i will give tt a try next time i'm there bc the lady told me it's one of their top sellers.