Tuaran is a small town about 30 minutes north of KK by car. When I was little, the road leading to Tuaran cut through large areas of lush green padi (rice) fields with the majestic Mt Kinabalu in beautiful shades of blue as a backdrop. Because the road to Tuaran was one of the few roads then, my Dad often drove us there on weekends because there was no where else to go. Last Saturday we found ourselves driving around with no place to go so we decided to head for Tuaran.
A few minutes before reaching Tuaran are stalls that sell crabs and other shellfish like mussels and clams. 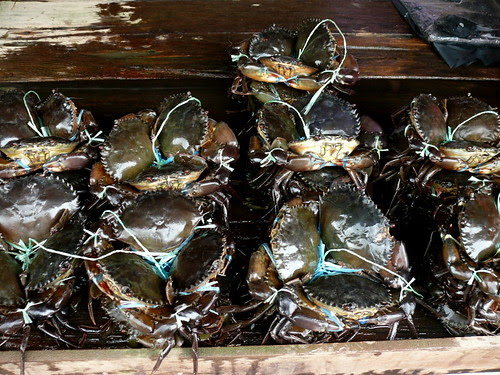 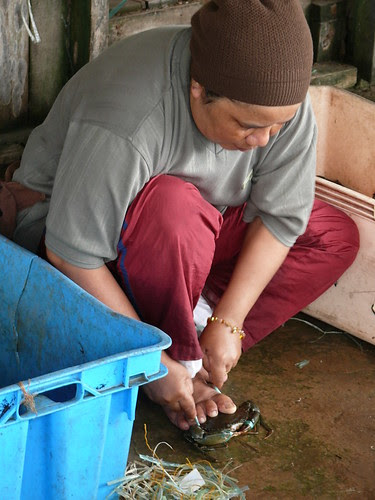 We bought 6 kgs of crabs at RM12/US$3.40 per kg, male or female. We went mostly for the female because of their roe. A word of caution: avoid the oysters because the first and last time I bought time, I had the runs even though I cooked them and a couple of them tasted foul even though they were fresh. 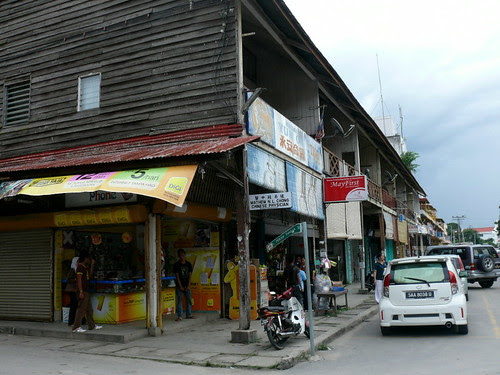 The remaining row of wooden shoplots that was built in the 50s. 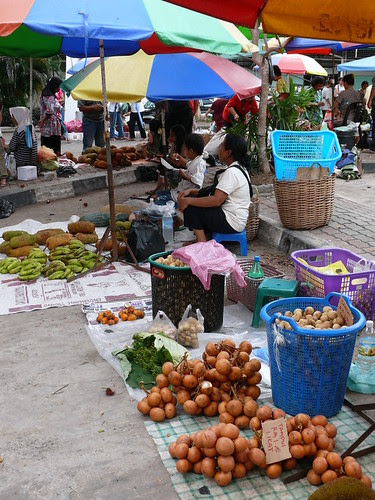 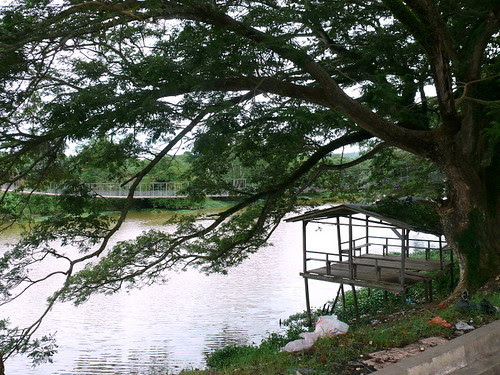 I've always felt that this town has great potential as a tourist destination because it is not far from the city yet still has its small town charm with buildings that don't rise above 2 storeys. The Tuaran River runs by calmly and many of the villagers live on the other side and cross to the town via a hanging bridge. But each time I'm there, I'm horrified by the chaos and the filth. Rubbish is everywhere and drains seem to have been left out when planning the town. I don't understand why the authorities are so incompetent and complacent. The tamu was unpleasant as I had to avoid stepping into filthy puddles, and the air was real stinky. Who is in charge there? Out! 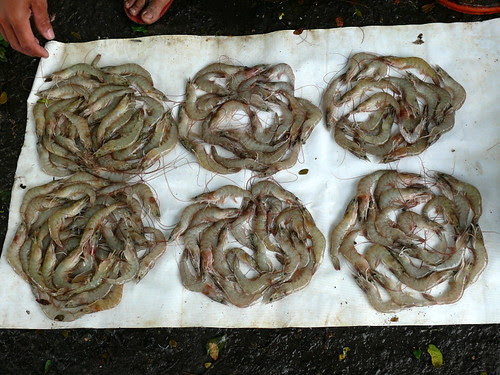 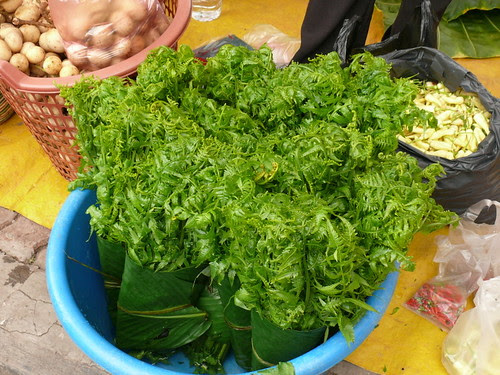 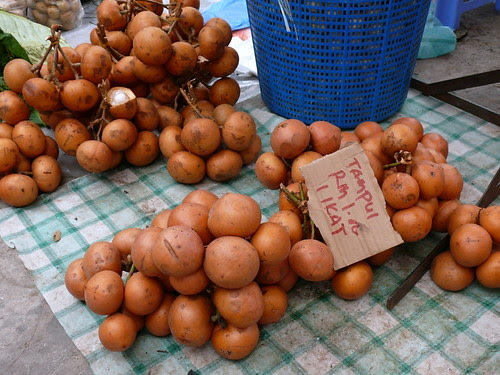 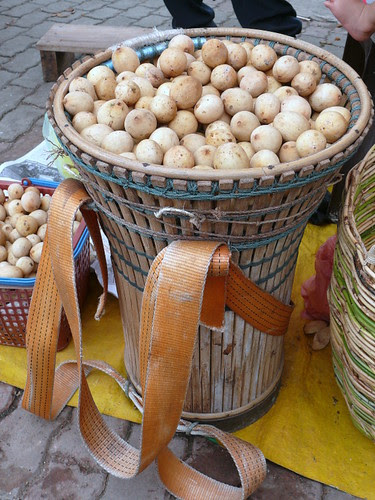 This is a basket that can be slung on your back so that you can have your hands free to harvest fruits from the jungle, like these langsat.I wanted to take a photo of the young mom openly breastfeeding her kid but was afraid I'd get slugged so I turned the camera to the langsat that she was selling.
Tuaran's most famous dish is Tuaran mee, a greasy dish of fresh noodles fried with egg and topped with roasted pork. Only the special Tuaran fresh noodles nearly the size and shape of linguine qualifies the dish as authentic. Tuaran noodles are somewhat similar to fresh wonton noodles and the Tuaran way of frying is unusual in that although the noodles are fresh, like uncooked fresh pasta, they are fried straightaway without being deep-fried or boiled. It must take some skillful cook to not fry up a plate of soggy mess. We asked some shopkeepers the best place for the noodles and were directed to Restoran Lok Kyun, behind the town library. I knew we were in the right place when I saw a poster of Jason Axian of AFC on the wall. 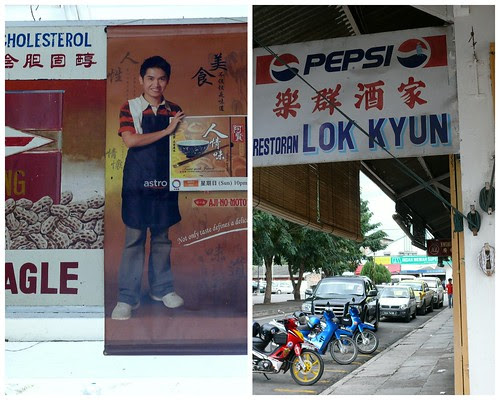 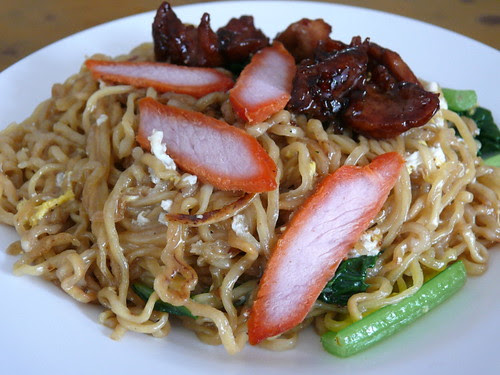 Tuaran mee
The noodles came and we waited anxiously for Wey to take a bite. He did so and immediately stuck out his thumb so I dug in too. The noodles were excellent, fried to perfection in taste and texture, not too wet or dry. The noodles were more el dente, slightly thicker than those we get in KK and the strands of noodles stayed separated, unlike most other Tuaran mee which are usually a sticky mess. I didn't like the red cha shao, which I think is Sarawakian-style, but the fried pork was very tasty and flavorsome. However, towards the last mouthfuls, Wey declared that he felt "jelak", a feeling that you can't eat anymore, usually brought on by eating too much oily food. I stopped eating halfway into the pile of noodles because I noticed that the bottom of the plate was shiny with oil. A couple of seconds later I felt a saltish, alkaline taste on my tongue. It didn't last very long and was quite subtle but I felt uncomfortable about it. I think it may be the alkaline water in the noodles which gives it that bite and the flavor. Still, I must say this was the best Tuaran mee that I've tasted, if only it wasn't so greasy. We also tried their wonton soup. The soup was good but the wontons hardly had any filling. At RM4/US$1.14 per plate, these noodles are worth the drive.
Posted by terri@adailyobsession at 11:18 AM

i remember this episode from Taste With Jason. though I mistakenly thought of this as another Mee Kolok wannabe. Or look-alike.
i understand the nauseating 'jelak' feeling, esp after downing a whole plate of greasy CKT.

I've tried this shop's noodle, liked the bite of the noodle but OMG it's terribly oily !! In fact fried Tuaran Mee is always very oily, do they need lots of oil to fry this noodle ?

Besides Lok Kyun, you may also choose to go to Tai Fatt which is just next to Ambank. Its less oily and the beef is better than Lok Kyun

How many more days b4 Hongyi?

Looks awesome, passed by Tuaran the other day while showing someone around. Unfortunately didn't have the time to stop and savor some of this deliciousness. Once in a while it's ok to have some oily food, surely!

We just discovered a new place selling Tuaran mee near the main bus terminal in Inanam. The menu is almost the same as in Tuaran but cleaner and much nearer to KK. We ordered Tuaran mee with 'sang nyuk' with a bowl of 'wonton soup'. Yet to try their beef with chinese wine. Overall, not too oily but lye water smell is quite distinctive. Place is simply named 'Tuaran Mee'. Just drive pass the bus terminal and take the first turning on your right. It's on your right. Do let us know Wey's rating of the place if you decide to try it out someday. Have a nice day!

We had this before in tuaran.yum yum....miss it. must go again.

Hey tried the rojak and sup tulang opposite the road at that corner stall near the bank? YUM, our Malay spaghetti with the rojak sauce. I am so going to Tuaran again soon! :)

now i feel like going to tuaran to eat this! oh noess....

Rambai... its been long since l last tasted these fruits. Btw, is it el denté or al denté?

the crabs are so cheap but the BBQ pork are too lean.

i bet some of u might notice that the taste of tuaran mee from lok kyun now (if u guys still going there) has changed,famously known for its combination with 'Char Nyuk' (i bet u know bout this),back to the main topic my dad was the original chief cook in lok kyun since he's having conflict with the son-in-law of the boss,he decided to resign without taking his salary and finally he ended up opening his own restaurant in Inanam Business Center (right in front of Jabatan Pendaftaran Negeri Inanam branch)...i wont tell the name of the restaurant,find it out yourself and i guarentee that ur gonna miss goin lok kyun....