Park Guell is a park in Barcelona designed by Gaudi. I had no idea what the fuss was about Park Guell and since Rick Steves only gave it a one triangle, I didn't really want to go but the two architect students did so I went with them. 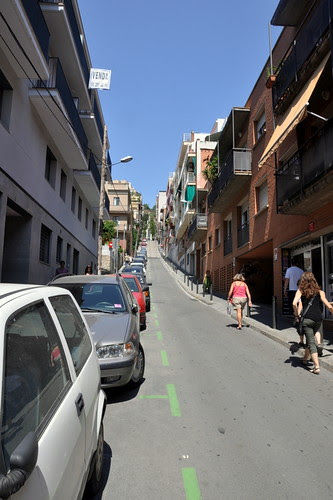 From the metro station, we walked about 15 minutes before we got to here, where we were told that it was a long walk up to the park. 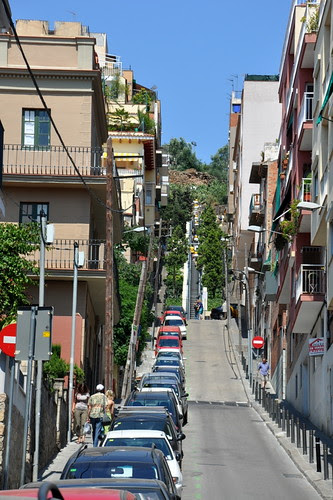 It was another HOT day with no shelter from the sun. Heat + uphill climb made the journey to the park very tough. I drank a lot of water and Coke and wished I was shopping in El Born. 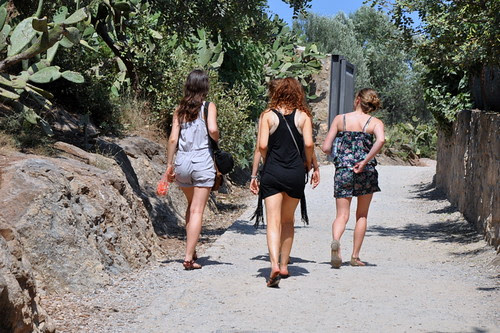 Once inside the park, we had to walk about 20 minutes, again in open sun. Most of the ladies were in summer dresses but we were in jeans. When we got into Barcelona's airport from the Netherlands, the ladies on our flight appeared from the toilets in dresses and sandals, all their jackets, scarves, shoes and jeans gone. In hot weather, dresses are really the best attire.

As someone who lives in the tropics, I am typical in my preference for large green rolling plains, conifers and fields of wild flowers. The Mediterranean landscape of dry, dusty and grey-green vegetation (olive trees mostly) is exotic but not beautiful to me. 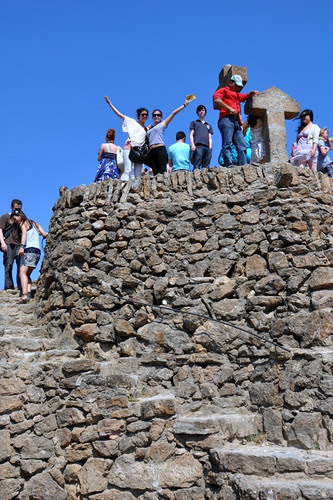 We followed the girls up this tiny hill top where about a dozen of us perched dangerously to appreciate the view of Barcelona. On the hill top, there's a cross made of stone (behind the man in red) and an arrow of stone pointing up to heaven--Christ is the way to Heaven. 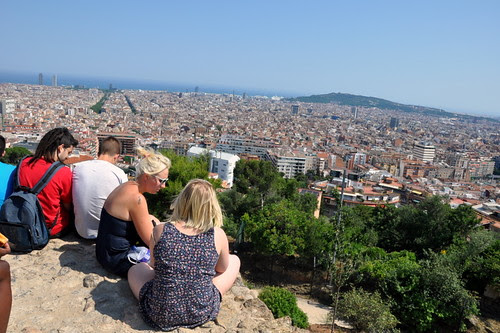 The phallic Torre Agbar is on the left and Sagrada Familia on the right. 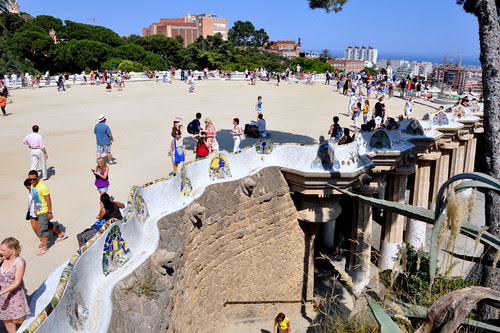 Another 15 minutes walk lead us to an open area of the park filled with buskers, vendors and people out for a stroll. 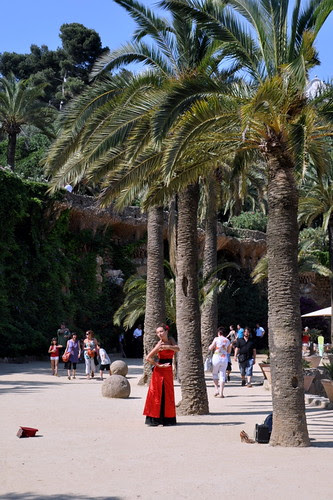 One great thing about Italy and Spain is that there are drinking water fountains everywhere. Nice straight legs. Europeans are mostly slim and healthy looking, unlike the Australians or Americans. I think it all boils down to small serving portions and a lot of walking. I lost 2 kgs in 2 months. 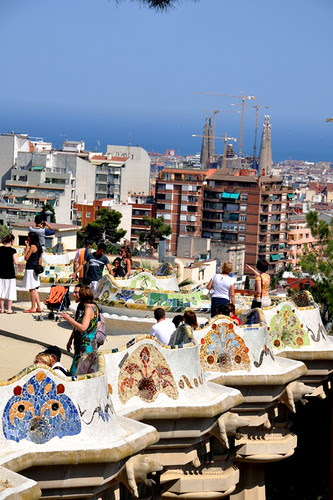 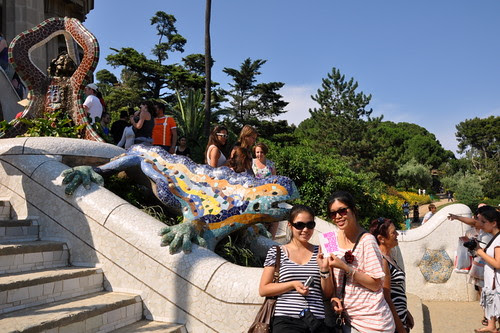 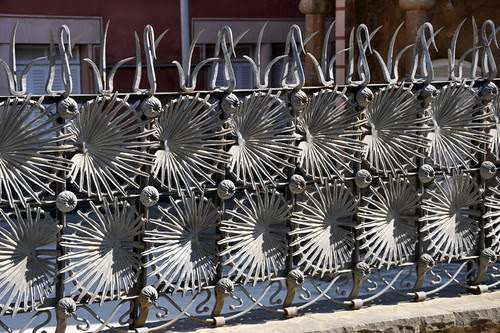 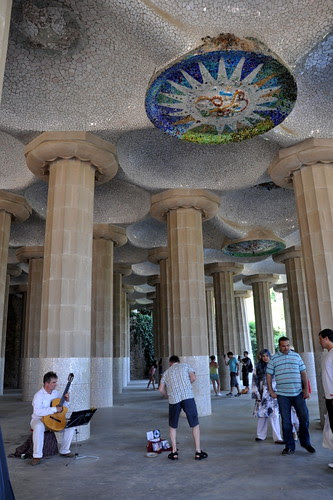 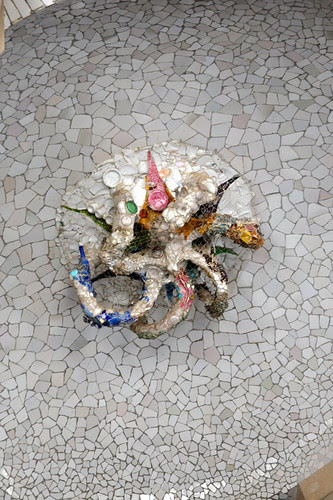 star fishes and octopuses in the ceilings, 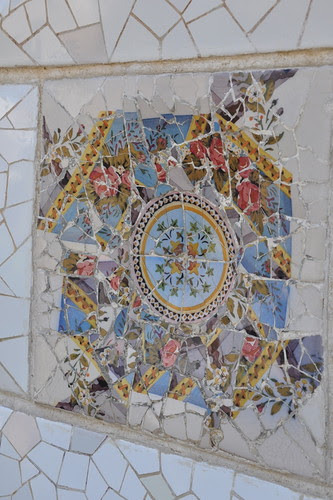 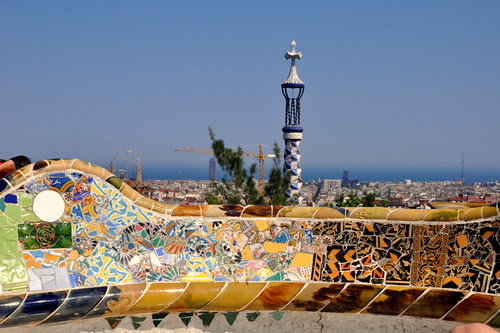 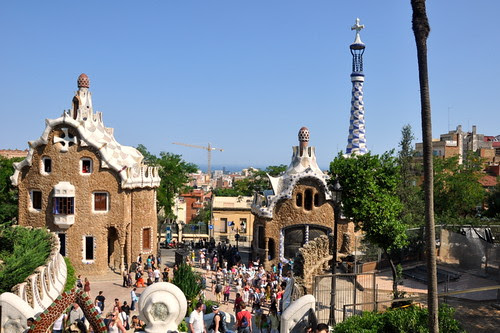 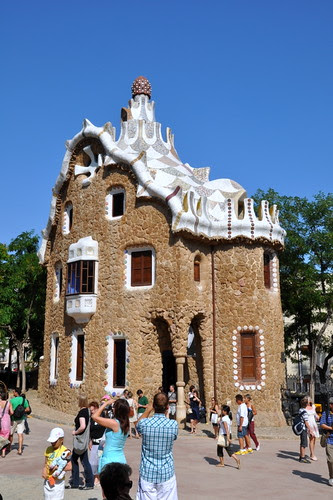 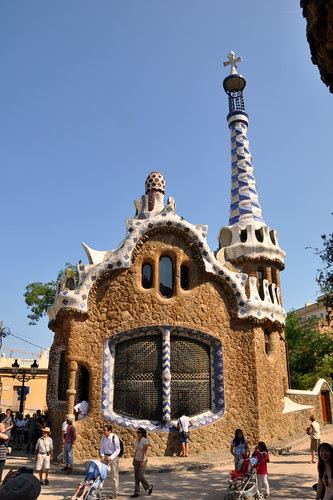 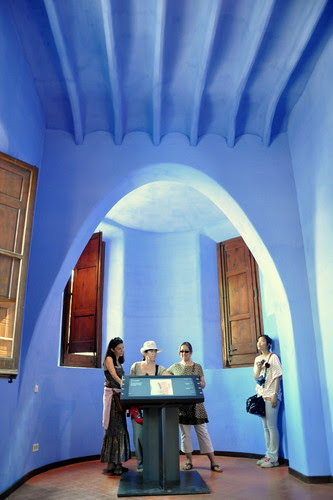 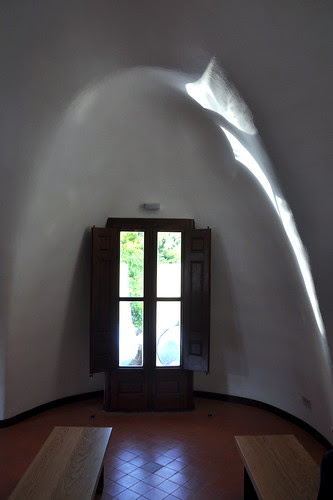 Gaudi's rooms are never straight or linear. I love this house, it was like a play house. 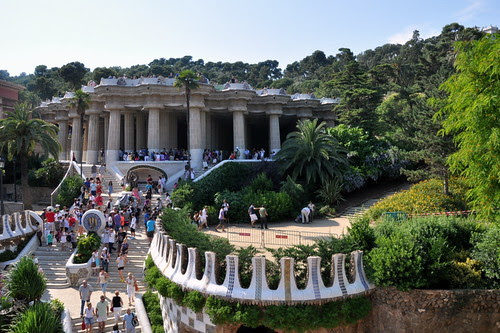 I applaud Gaudi's park because it stands out as a park where you can explore and wonder unlike regular parks which look alike whether it's Hyde Park or Central Park. The only thing I didn't like was the sun because it was too searing hot.
Posted by terri@adailyobsession at 5:39 PM

When I was there, it was in Feb, and the weather was super. Cold and refreshing, so the uphill walk to the parc was bearable. BUT! the sun was so blindingly searing when we got up there, I ended up also sitting under shades while the gwailous were soaking in the rays like no tmrw.

OOOH looks realy hot....nice interesting park tho. when are you coming back? It looks like you ve been there forever ...LOL

Ohh!! I love Park Guell!!
I think it's one of the most beautiful park I've never seen!!
Gaudì was a genius!!
I'm glad you're fine and enjoyed your holidays!
Ciao!
Laura

heather: no kidding, a tan in winter! next time i'll use an umbrella, don't care if i get stares.

zurin: my dear, you missed my first post when i got back? i'm home already lah!

laura: yes gaudi was a genius. did u see the drawings he did while at uni? i think they humble any architect. and laura, thank you so much for your concern and kindness! i wish we had met up but we can always plan to meet, with you coming here or us going to florence again :))