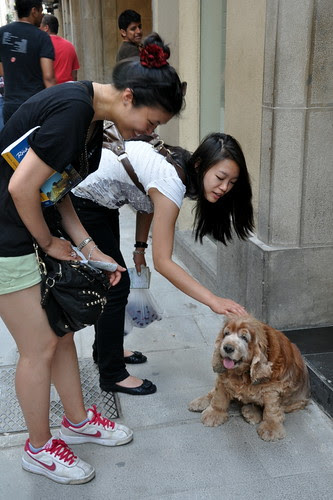 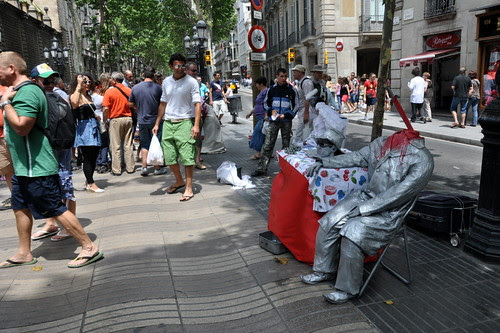 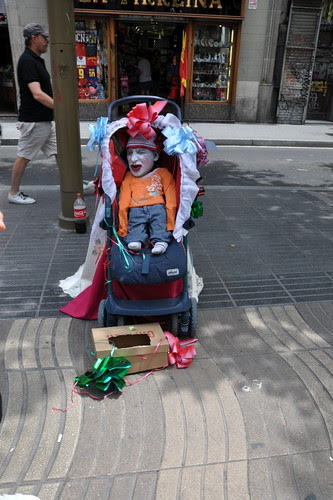 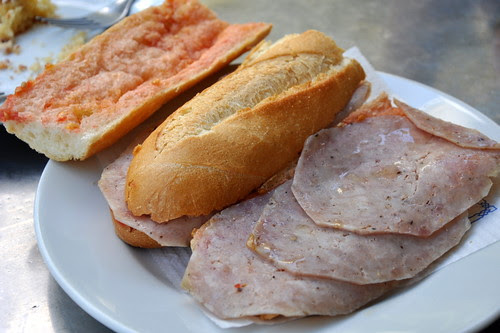 Can't remember what ham this was, but it was very good. Notice the light tomato spread which is very Spanish. As in Italy, no mayo or butter is used for sandwiches which I prefer too because then you can taste the flavor of the ingredients or fillings. I think mayo is used in many countries to mask the taste of inferior ingredients.(note 22/8/10: thanks to the reader who has informed me that bread smeared with tomato and drizzle with olive oil is called pa amb tomaquet) 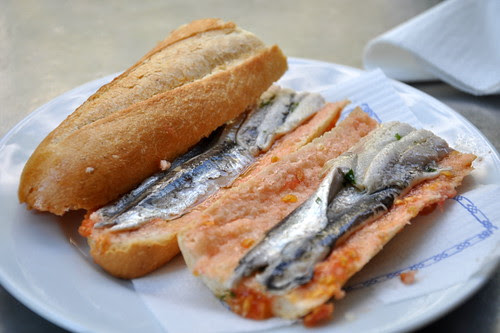 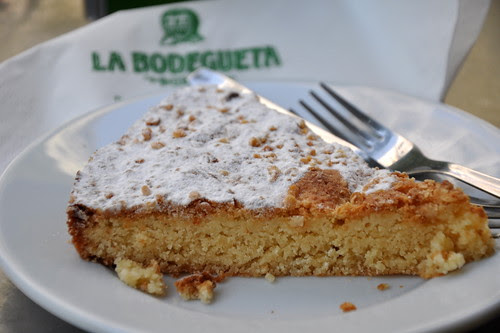 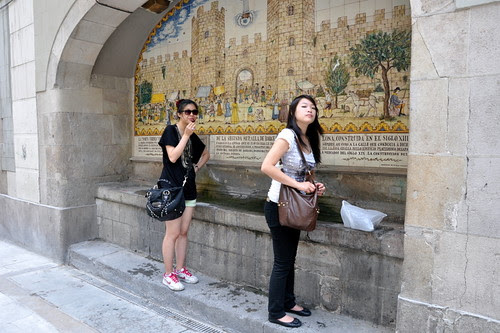 Not all water fountains are for drinking, a fact we found out too late. 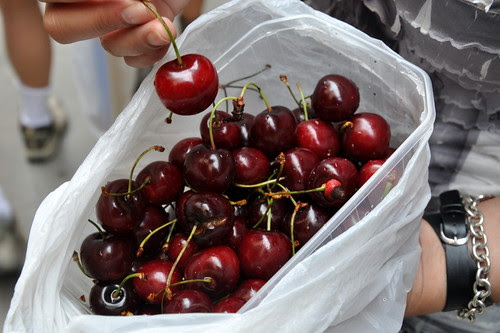 Big juicy cherries. I think they need to come up with seedless cherries. 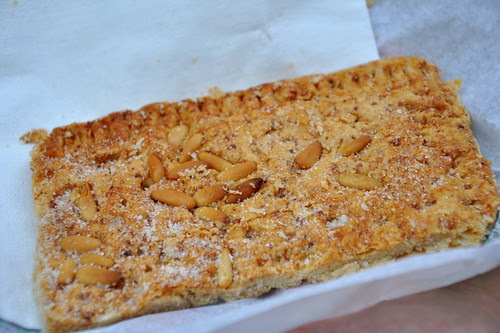 An expensive slice of pine nut crumble that was dry and bland. 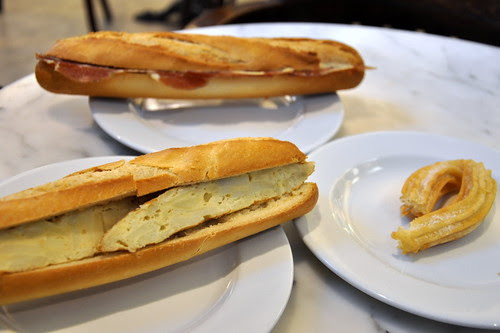 This was the worst thing we ate. We were at the train station to check out the tickets and had to have lunch there. Potato tortilla sandwich, jambon sandwich and stale, hard churros. 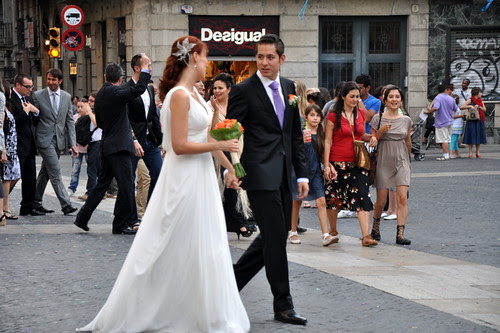 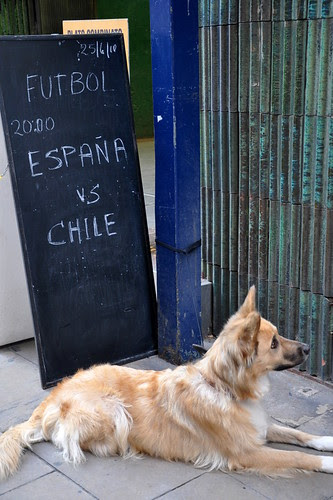 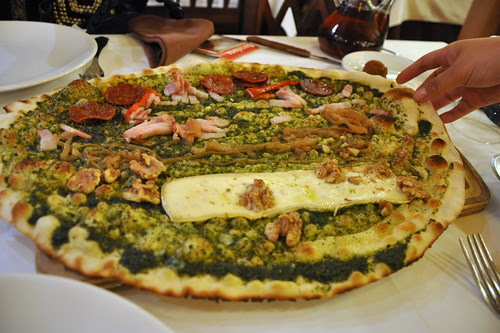 A creative pizza that isn't perfectly symmetrical. It was the biggest pizza I've ever eaten and it was only about 11 euros and very tasty. 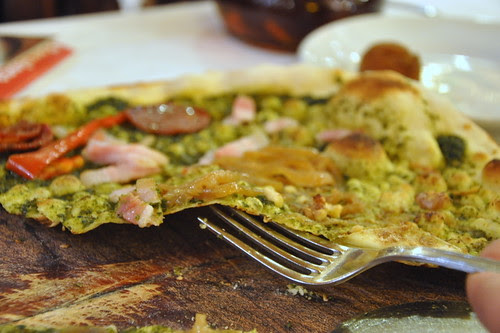 And it was the thinnest pizza I've ever eaten too. 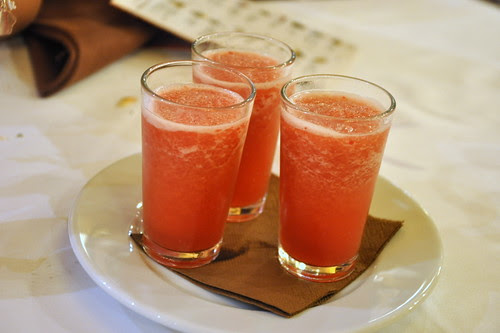 A complimentary fruity granita drink that was laced with strong alcohol which made us giggly and giddy again because we had a jug of sangria too. 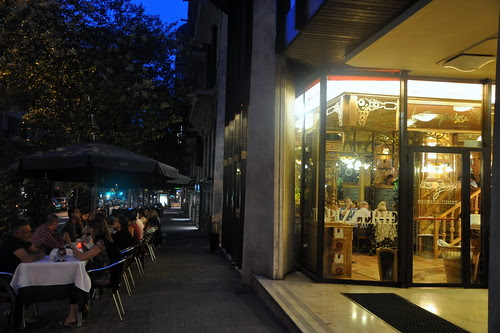 I'll give the name of the restaurant when I find the card. You must try horchata, a drink made from tiger nuts. It is a light beige milky drink that tastes a little bit like coconut santan and is very refreshing and delicious. 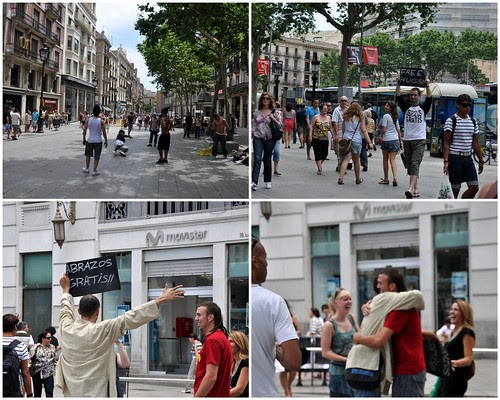 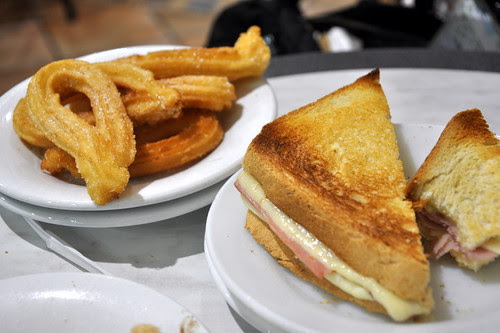 This cafe off La Ramblas served the best churros (and the sandwich was yum too) but I've lost Rick's book so I don't have the address. 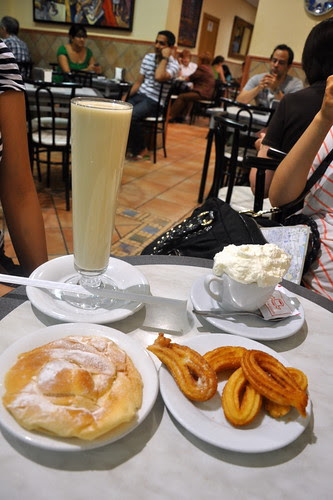 That's horchata in the glass. This one was too diluted. 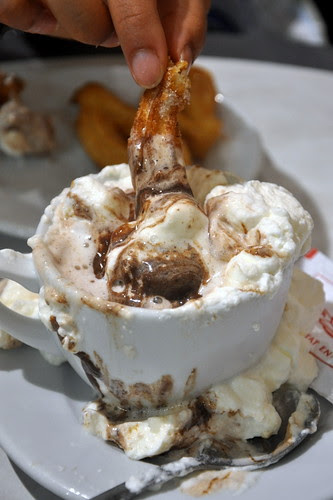 We should have ordered the Spanish chocolate (gooey, thick, black, rich chocolate) instead of swiss chocolate (thick, rich choc with a big topping of cream) to go with the churros.
Posted by terri@adailyobsession at 12:02 AM

Great pics of Barcelona. Was there once as a teenager, but didn't get into town much. Ate squid in it's own ink. Skip that.

Glad you all are having such a GREAT time.

melekler korusun final said...
This comment has been removed by a blog administrator.
July 29, 2010 at 9:40 PM

Beautiful pics..thank you for taking time describe your travel!

tealady: agree, i've never understood what the fuss about over squid ink.

oh europe's the best. it's hard to get back to routine after europe :((

sertyan: it's for readers' info n for me to remember bc i forget easily

LOL Love the doggie pics and the free hugs. I wouldn't mind trying to hug people for free here, though something tells me I might wind up in the back of a police car instead :)

The pink tomato effect in the sandwiches is emphatically NOT Spanish but Catalan. You won't find it outside Catalunya, of which Barcelona is the capital. It's probably the most 'typical' of Catalan specialties. Easily replicated at home by rubbing fresh, ripe tomato over crusty bread though admittedly this might not be so easily replicated in Southeast Asia where tomatoes tend to be orangey and sour.

Baguettes are not meant to be hard - if it's hard it's stale. Crustiness is a virtue. But the pix show Spanish crusty bread, not French baguette

all long crusty baguette-like bread is baguette to me. i did say it's flat baguette, which is more spanish than italian. n you can call it crusty but baguettes are hard crusty, hurts my mouth.

I apologize for being a pedant. I guess it depends how precise you want to be, e.g. we might differentiate between Singaporean roti prata and Malaysian roti canai but to a third party, both are just 'Indian bread' (although purists might dispute both these appellations). Anyway the point about the tomato bread is that you only find it in Catalunya, which thinks of itself as quite separate from Spain. Perhaps you might have seen signs in Barcelona that make this differentiation clear, e.g. guided tours might have been offered in catalan or in castellano (Castilian Spanish, or what non-Spaniards would think of as 'Spanish' language).

I think I'm the exact opposite to you when it comes to crustiness. I always throw away the soft white inside and only chew on the brown crust!

anon: if tt's the case, we might as well say we are going to cataluna and not spain when we go to barcelona?

i've always loved the crustiness of baguettes, still do but like most non-italians, i've mostly eaten baguettes slices, as in corstini n bruschetta. however, live in europe (the 'southern countries like france, italy n spain) for more than 2 weeks n you'll wonder how people eat baguette sandwiches everyday because these are baguettes sliced horizontally n i can tell you need stronger teeth and lots of biting!it's totally diff frm eating baguette slices. n it's not a small sandwich i'm talking about, usually it's about 10 inches long.i was talking to a brit friend (n he's big n tough, got bigger mouth n teeth than me) in london n he too agreed tt baguettes cut the mouth.truly after only 3 weeks of baguette sandwiches, almost daily or other day bc it's cheap, i prefer the northern european bread for sandwiches.

Yes that's right - most Catalans would welcome you to Catalunya, not Spain. There is a very strong sense of separate identity in these autonomous regions. I once spent a summer with a girl from the Basque region. Everytime she referred to 'my country' she meant the Basque region, not Spain.