I made popovers 7 (SEVEN) times the last two weeks and the family got so sick of popovers I had to feed them to my chickens. The problem I had with my popovers was they puffed like balloons but they deflated as soon as I took them out of the oven. The only batch that didn't deflate so much was the one made with bread flour and plain flour. I don't know if it's the humidity. I can pass off deflated popovers as Yorkshire pudding but what I really want is popovers, not Yorkshire pudding. If you have a no fail recipe, please send it in.

So here I am, nothing to blog about now that I'm done with my American trip. And so I shall pick up from where I was before I went to the US. Talking about the US, if you go to NYC, you must take a ride on the subway into Brooklyn or the Bronx because that's when you will most likely see some amazing performers/buskers on your ride. I took a video of one performance but since I was standing, the video turned out too shaky.

Anyway, my Shanghai trip in March this year: 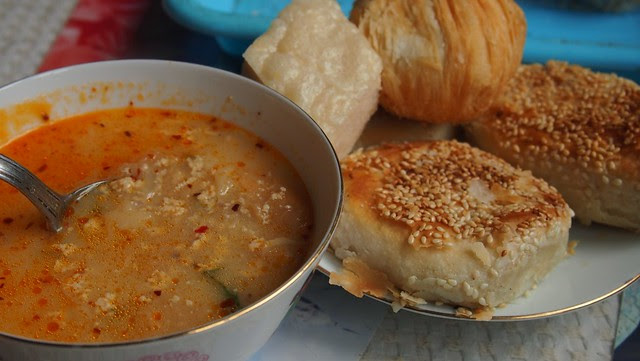 Our breakfast one morning, at Hub's request, was savory hot soy bean milk with Shanghainese pastries. Yum, but as a Cantonese, I find savory soy bean milk rather odd. 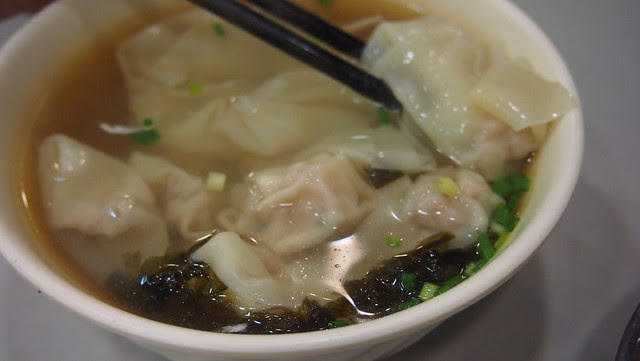 Shanghainese wontons in restaurants are pathetic compared to those in Guangdong and Hong Kong. Exception is my MIL's wontons. MIL makes the best meat wontons which I can't make no matter how many times I watch her. 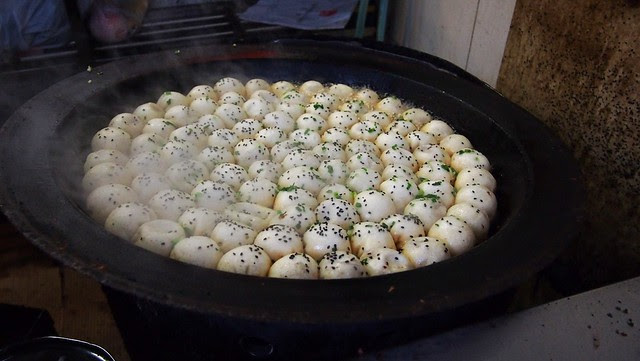 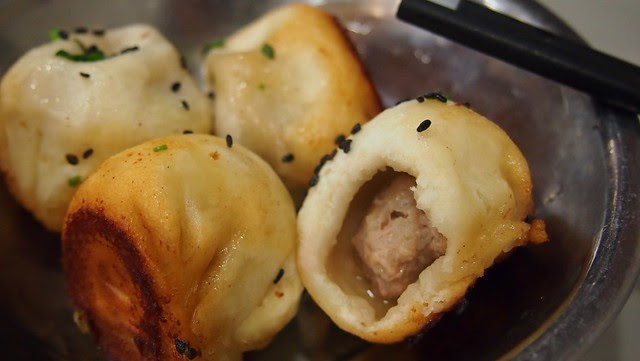 I like shengjian bao better than xiaolong bao because the base is toasty and flavorful and the bao is of the right thickness, not too thin like xiaolong baos and not too thick like ordinary baos. 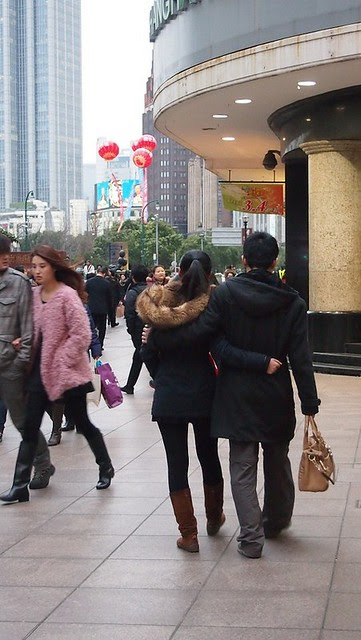 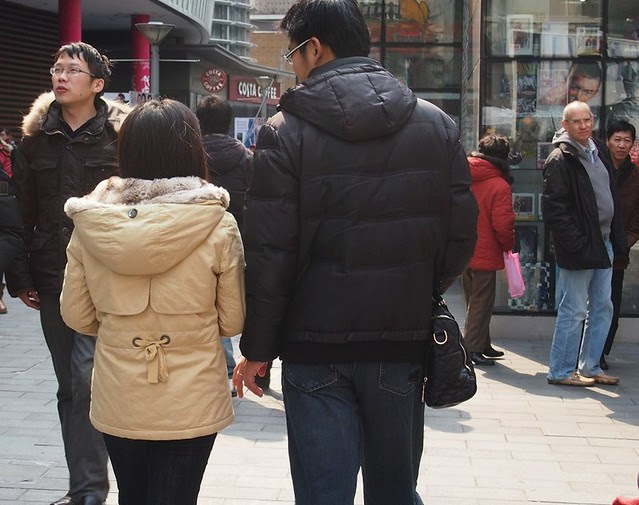 Shanghainese men love to carry their gf's/wife's handbag. That's one reason why they are called 'ma da sao'. Six years ago, I was told by a taxi driver in Shanghai that Shanghainese men make the best husbands. I beamed. Out of the 5 qualities in this article, my Hub is 2, 3, 4 &  hmm, I have to find out if he's stashing some money without my knowledge before I brand him as 5.  So, lucky for Hub, that saves him from being a wimp. Before you rush to marry a servant/Shanghainese man, remember that behind every Shanghainese man, there's a Shanghainese mother. What about them you ask. Well. Why do you think SH men are 1, 2, 3, 4, & 5? 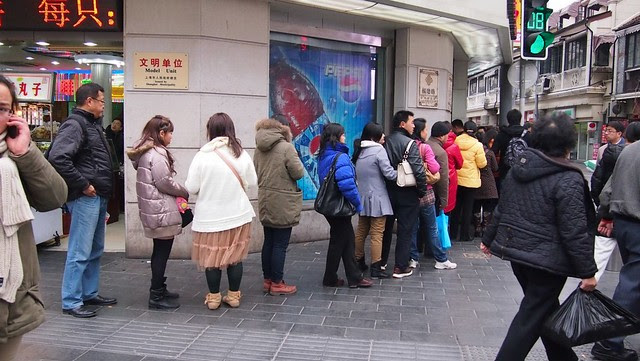 This queue was on Nanjing Lu, on a cold day. Whatever it is, it must be good, we figured, 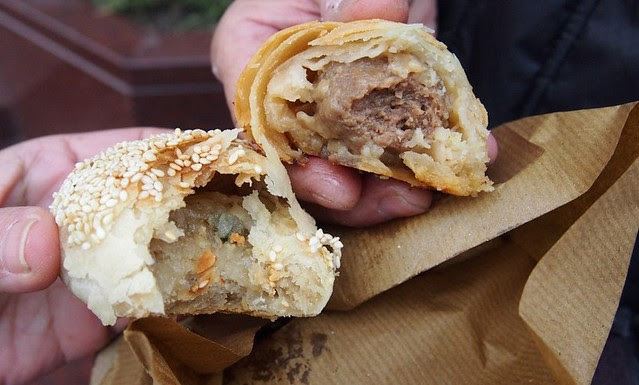 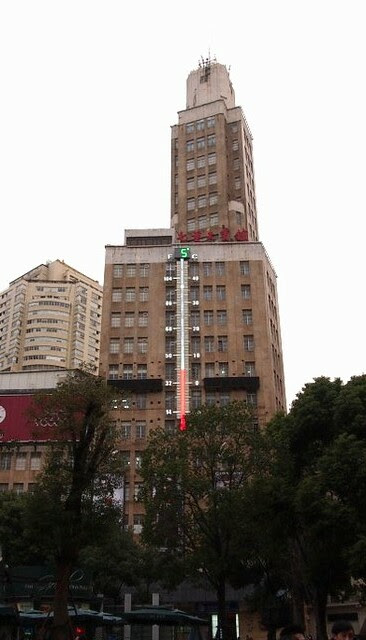 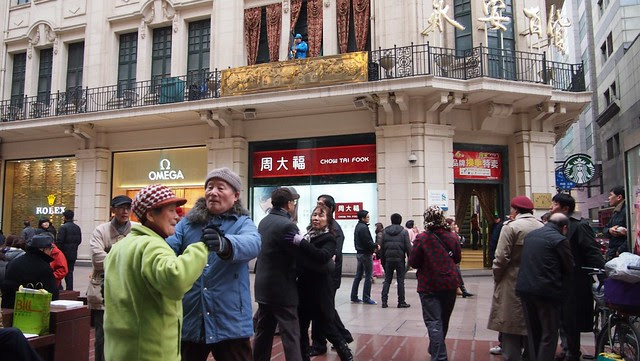 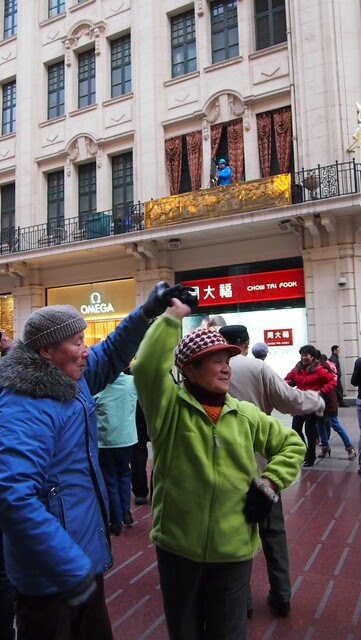 The lady's got the moves I tell you. 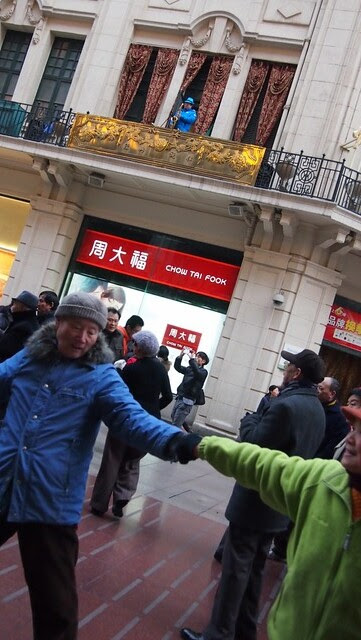 Her partner's got the flair too. 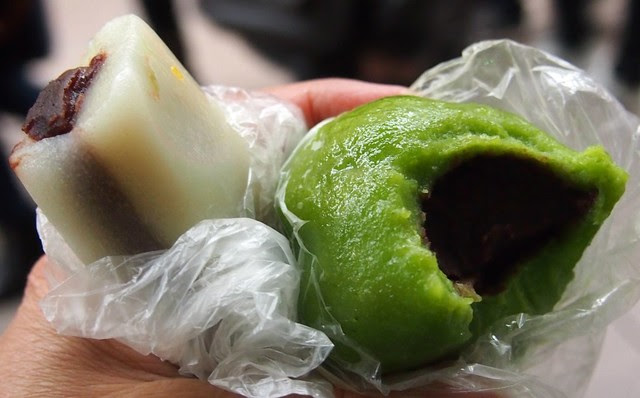 I nearly had to fight to buy these glutinous rice snacks. You can't stand and wait in line if you are in SH, or China. You'll be pushed out of line if you don't push people away. 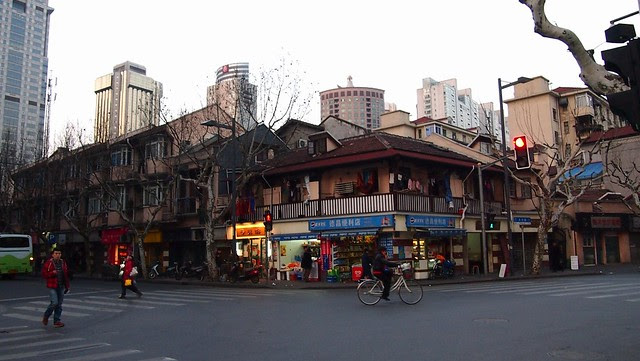 Old buildings in front, new at the back. That's the charm about many cities in China. 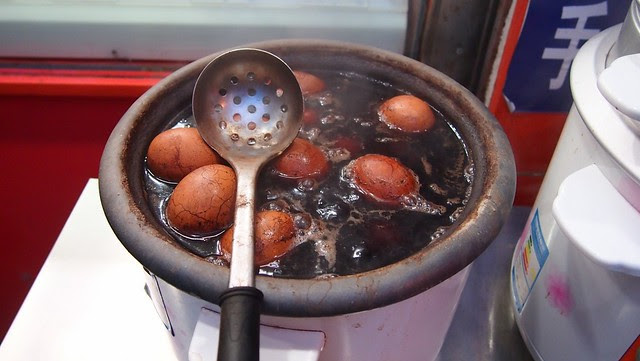 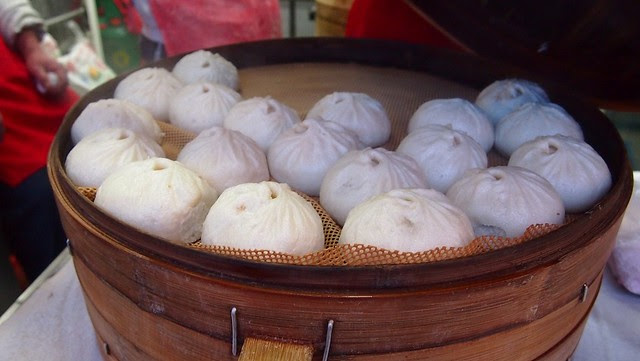 One of the most humble but best snacks in China, baos/buns. I especially love Shanghainese vegetarian buns. 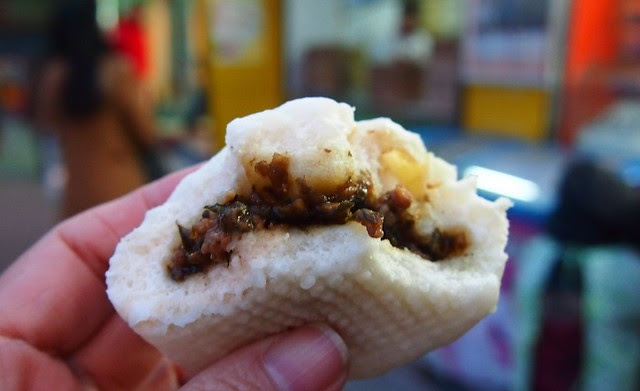 The bun 'skin' is amazingly soft and light and fragrant, and the filling is ohsogood. 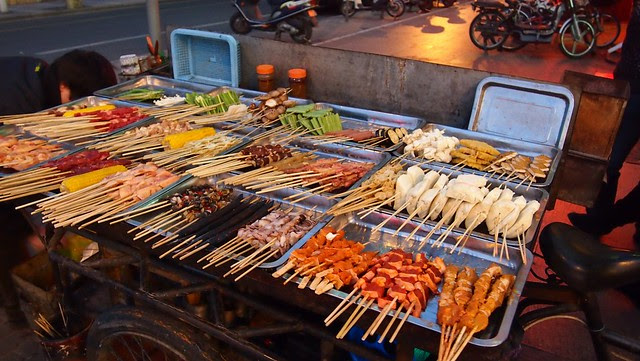 So tempting but Hub wouldn't let me eat street food. 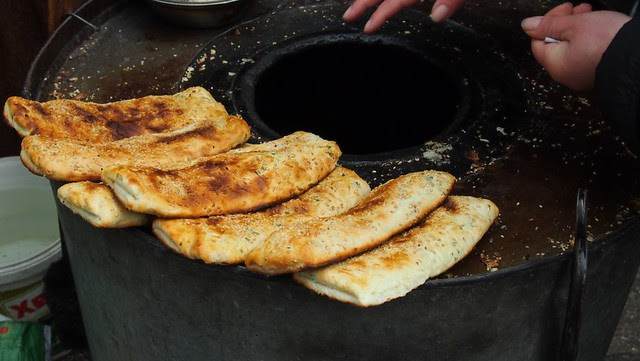 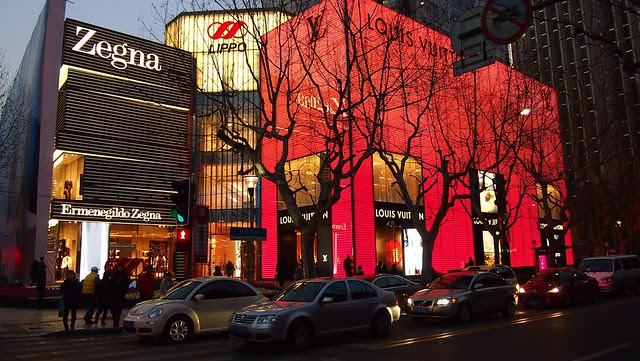 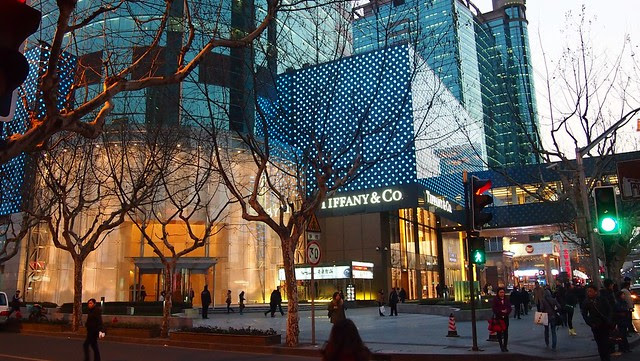 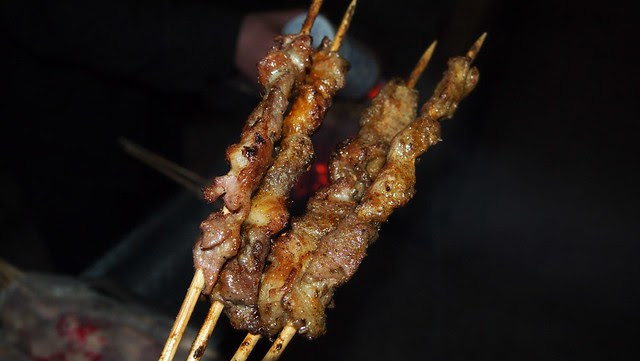 Hub wouldn't let me eat street food but I love bbq meat on skewers (similar to Malaysia satay but without the peanut sauce) sold by Sinkiang people. Sinkiang is a province in China which is populated mostly by Muslims. I have no doubts that it was Eve who made Adam eat the apple. This was the best skewered  lamb I've eaten on the trip. There were a lot of fatty bits and the first time I bit into one piece of fat, I wanted to spit it out but there were no bins so I had to chew and swallow it. When I did, I couldn't believe how delicious lamb fat could be! I told Adam he must chew and swallow the fat too, and he did, and we both felt ashamed. But happy. 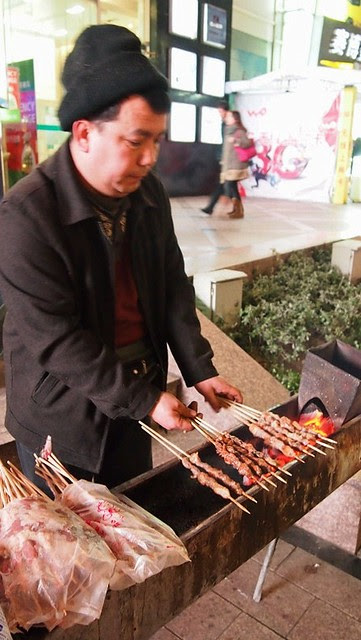 I took his photo. Search for him. 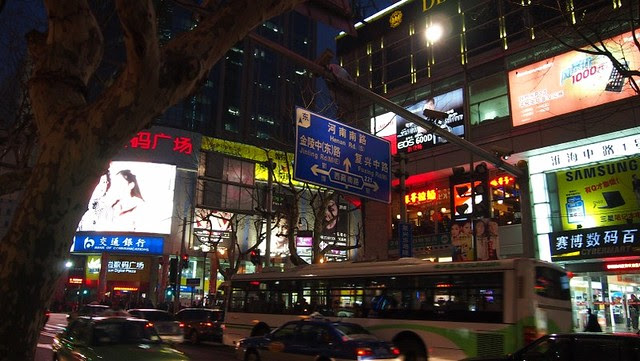 Here.
Posted by terri@adailyobsession at 12:06 AM

Hahaha! Great Adam and Eve story. Must tell my hubby that!

You know I would have mistaken Shanghai for Tokyo instead what with all the global luxury brands represented, where you took your photos it looks just like a street in Tokyo. Is it Hua Hai Zhong Lu near where Lane Crawford is?

BTW, I am from Singapore, may I know how did KK come to be that there is a sizable Shanghainese community living there? Reason for asking is that I know of an acquaintance in Singapore working here who is from KK too & is of Shanghainese descent. Also the famous historian & writer who was researching in Singapore NTU was from KK, she wrote the famous history of overseas Chinese in several volumes I think. I have forgotten her name. She was educated in her teens in UK, sent there by her parents in KK.

maybe i should really go to shanghai and maybe i will fall in love with its quirky charms.

Other than the obligatory teochew and foochow cuisine, my next favourite has to be shanghainese food! Your post is making me soooo hungry!

Born and raised in Shanghai, I miss the city a lot, especially the food. Thanks for sharing your recipes and experience. =)