Newly opened Xin Tian Di is one of Shanghai's most popular tourist spots. It is a beautifully restored shikumen, a kind of gated housing neighborhood where cars are not allowed. The houses are built of stone or brick and very old. Of all the restored shikumen, Xin Tian Di is the most elegant and classy, with expensive famous restaurants and designer Chinese souvenirs and apparel stores. I found the place very pleasant but rather unauthentic. It seemed like a westernized version of Old Shanghai. 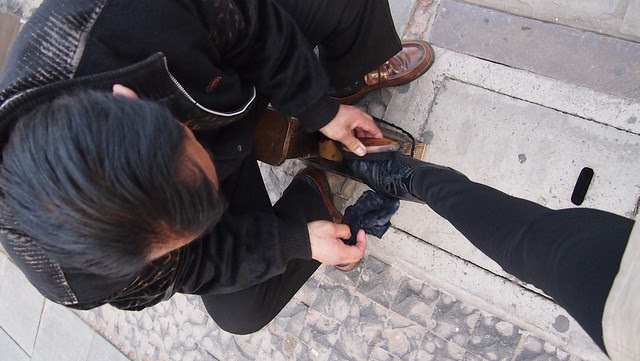 At the traffic lights before entering Xin Tian Di, I stopped to take some photos and before I could even stop him, this guy had grabbed my feet and started to shine my shoe. I looked across the street and saw a woman doing the same thing to my Hub's shoe. We laughed at each other, the man complimented me and I nearly doubled his price of RMB10 but was intercepted by Hub. 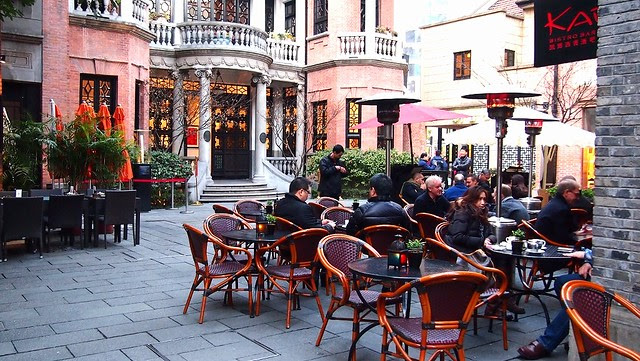 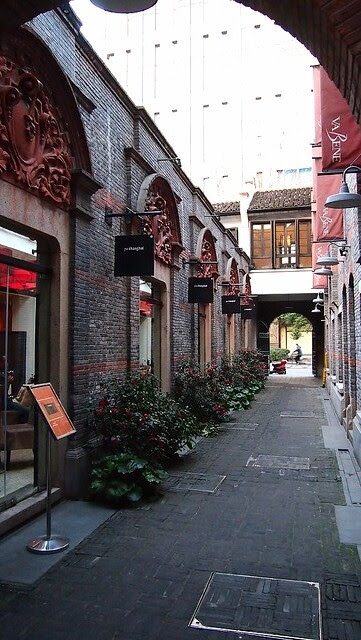 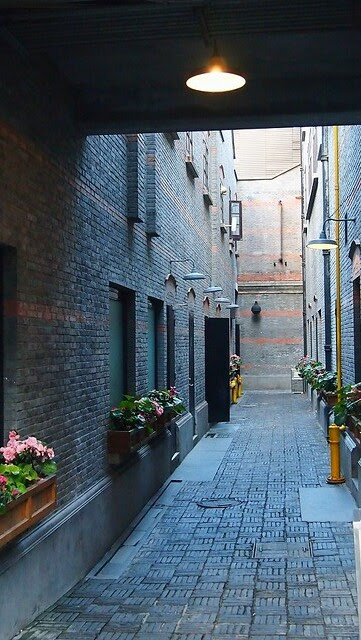 Xin Tian Di is nice place and you should dine there if you can afford it. But we couldn't, so we went to 26 Shouning Lu, near Xizang Nan Lu. A total contrast from Xin Tian Di, Shouning Lu is where people go to after a late night out in the bars. We had to plan our bbq meal sneakily because our relatives wouldn't bring us there. It was too unhygienic, they said. There, you've been warned. 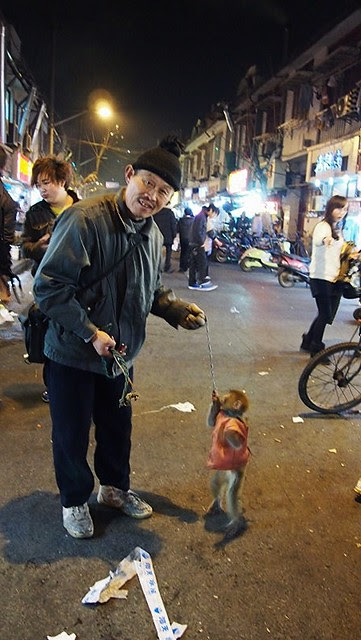 At the entrance of the road was this guy and his monkey. I took a photo and the guy immediately came over, asking for RMB1/RM0.50/USD0.15. The monkey was all over me which made me scream and jump.  Monkeys are terrifying. They move so fast and scurry around, baring their sharp claws and teeth and they have this wild wide-eyed deranged look. The guy calmed his monkey and urged it off my back after we paid him. Works everytime I bet. 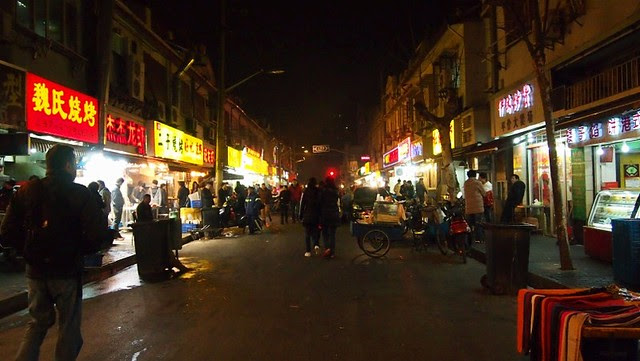 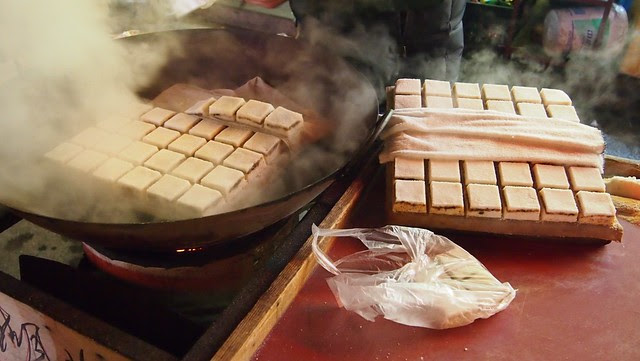 Osmanthus cakes. Oh these taste so bad, the osmanthus smelling nearly like sweat. They remind me of traditional Korean and Japanese desserts, tasteless and distasteful. 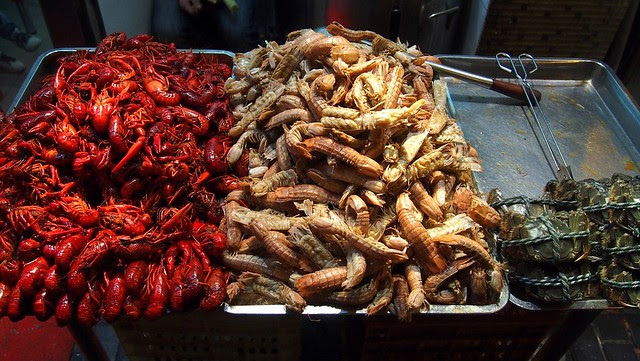 It's not the season for baby crawfish, so stay away, our relatives had reminded us when we asked about these crustaceans. They even have hairy crabs in March but these fellas must be so light and empty. 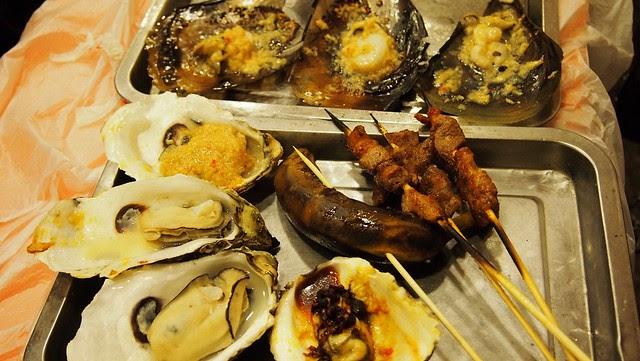 We settled down in a dinghy room in the basement, only because we saw a group of westerners (French, it turned out) eating happily. It amazes me when westerners eat in dirty places. The seafood was SO good. We had trays after trays of black beans oysters, garlic oysters, plain baked oysters, garlic scallops, bbq lamb and grilled banana. They were quite cheap but it adds up before you realise it. 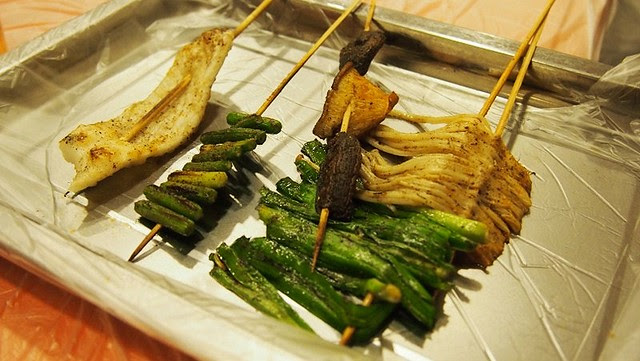 We balanced the seafood with some glutinous rice sticks, grilled beans, mushrooms and Chinese chives. Seasoned with cumin Sinkiang-style, these were yummy but contained loads of oil. 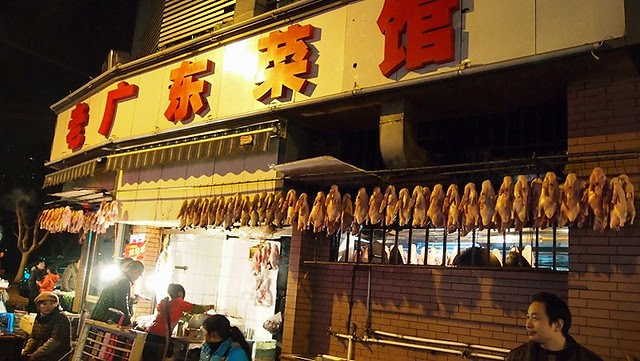 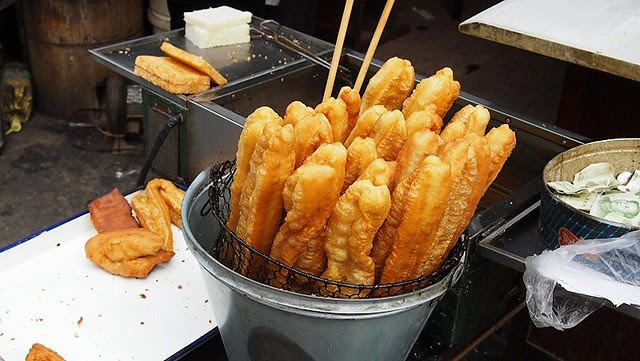 A lot of people like you tiao (oily sticks) but I'm in the minority. You tiao are Chinese crullers (deep fried yeast dough) usually eaten with congee or as filling in Shanghainese sticky rice rolls, chifan. I long for old-fashioned Sabah crullers, the kind I ate when I was a kid. Back then, Sabahans complained and wished for Hong Kong-style crullers which are thin-skinned with lots of holes, the dough yellowish inside from alum, an ingredient that preserves and gives crullers that astringent flavor which I hate. Sabah crullers had none of those additives and were thicker, shorter and white, with a texture like hum jin bang but more bready. 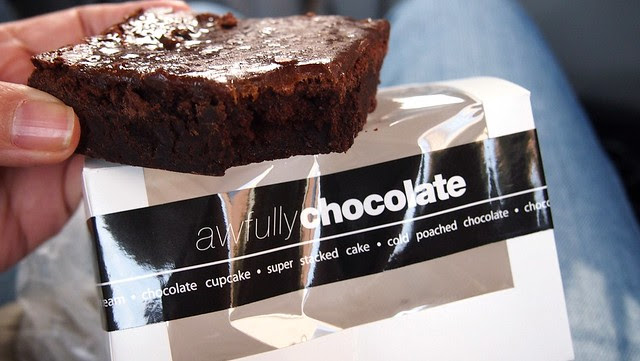 On our way home one night, we passed Dog Street, the street where people bring their dogs out to socialise (both dogs and owners) and I couldn't help sneaking a large slice of Awfully Chocolate's chocolate slice into my belly. I know many Singaporeans don't agree with me, but I do find AC's chocolate cakes very delicious. 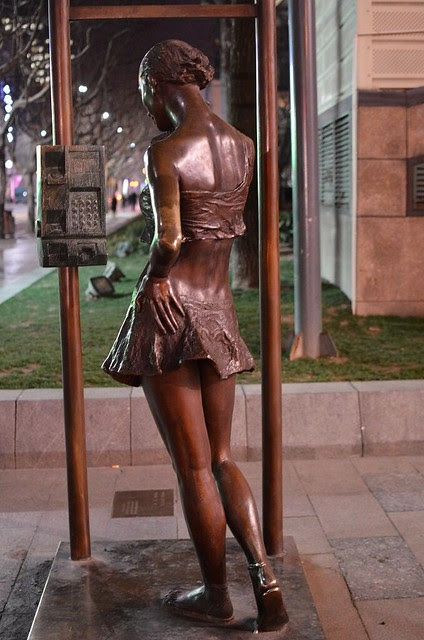 Remember her? She was stolen once and had to be remade. She has to put up with a lot of abuse, including curious boys. 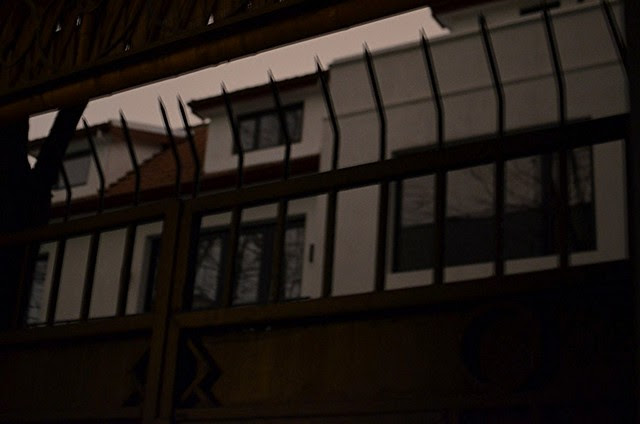 One night, we walked home and passed by Hub's old house when he was a little boy. When their family grew, my in-laws moved out from FIL's father's shikumen house into a beautiful bungalow in the French Concession. On our first trip to SH in 1999, we had the rare chance of going into the house as a new buyer was renovating it. It's a beautiful house with a a solid wooden staircase made of very hard wood and the garden was big enough for trees, quite unusual for a city like SH. FIL sold it in the 80s just when China was opening up to the world and that was one thing that they always regretted. MIL's younger bro still stalks the house, I hear, and relatives still talk about the house too. Now we can only stare from the outside and listen to Hub's stories about the house that got away.

p.s. Wey has a week off, I just found out on the weekend, so we are leaving for a short trip to Singapore today. I have scheduled more posts for the week and when I get back, we'll look at what we ate in Singapore. If you have suggestions, I'll be happy to check it out!
Posted by terri@adailyobsession at 7:29 AM

Hi! You must have labeled your photos incorrectly by accident? The photos you said were Tian Zi Fang are actually Xin Tian Di...

Ting: oh gosh, so embarrassing! U r right! I dont read or write chinese n i get confused...*blush blush*

please blog more about shanghai. i love reading about its charms. :)

An English friend of mine have just left for Shanghai along with 3 young kids and a husband who has a 3 month contract there. Must get her to read your blog. She doesn't speak a word of Mandarin and really doesn't know much about the Chinese culture. Hopefully, she'll be fine.

Shanghai has changed tremendously since I was last there. I'd love to go back there someday. Will probably hit you up for lots of tips and advice.

Very courageous to have eaten BBQ where you ate, I have yet to find the courage to do it!

Otherwise, if you have the chance the next time you visit Xintiandi, T8 is a very good restaurant to check out.

My in laws too regretted the time when they sold their houses, especially when they did so to invest in shares. Could imagine the crash and the loss they've incurred whereas property probably wouldn't have lost its value.