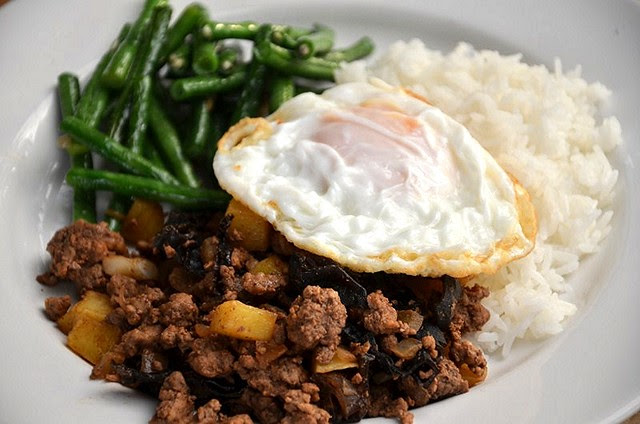 Macanese minchi, usually eaten with rice and a fried egg..

So a few nights ago we were watching Anthony Bourdain eat his way through Macau  and everything seemed so exotic to me, from the streets to the food to the Portuguese Eurasians. Has Macau changed so much in the five years since I visited or did I not see the real Macau? I bet if you've been to Macau (one hour from Hong Kong, it's part of southern China that was leased to Portugal about 500 years ago as a trading port and returned to China in 1999), you'd have eaten those delicious Portuguese egg tarts and pork chop buns. But did you eat minchi? Do you even know that minchi is Macau's national dish? I didn't. I thought Minchi was a girl I knew back in university; never met her again after we graduated. Hey Mingchee of Sarawak, please FB me if you ever read this!

Yeah, so I thought I knew Macau but realized when watching the show that I have to visit the place again soon because Bourdain made it so different from the Macau I visited. The guy just looks like he has so much fun everywhere he goes, doesn't he? He's the coolest food traveller. Really, wouldn't you rather be him than Zimmerman or Chinn or Smith or Axian? It's not just the leather jacket. Bourdain makes food tasting travelling so...hippy chic.

Bourdain ate a version of minchi with Chinese black fungus. Black fungus are commonly used in Chinese cooking, especially in vegetarian dishes. The more popular version of minchi has potatoes instead of black fungus but of course Bourdain wouldn't choose potatoes over fungus.  Since I love both black fungus and potatoes, and I had no idea what's more authentic, I decided to include both in my minchi. There aren't that many minchi recipes on the Net but from what I've googled, minchi is a home dish and every mom cooks her own version which can be a mixture of beef or pork mince or one of those, potatoes or black fungus (which is either 'cloud ears' or 'wood ears'), and may or may not have cumin or cinnamon or oyster sauce or tomato paste but the basic seasonings are light soy sauce, dark soy sauce, Worchestershire sauce, salt, pepper and sugar. Oil can be veg oil or olive oil. 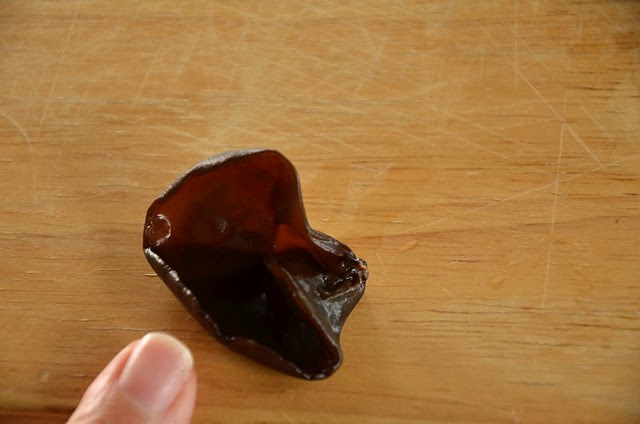 Cloud ears are softer and thiner than wood ears. Both are edible fungus said to improve blood circulation and lower cholesterol but I eat them because I've always eaten them. Black fungus has a nice light crunch, yeah, like ears. 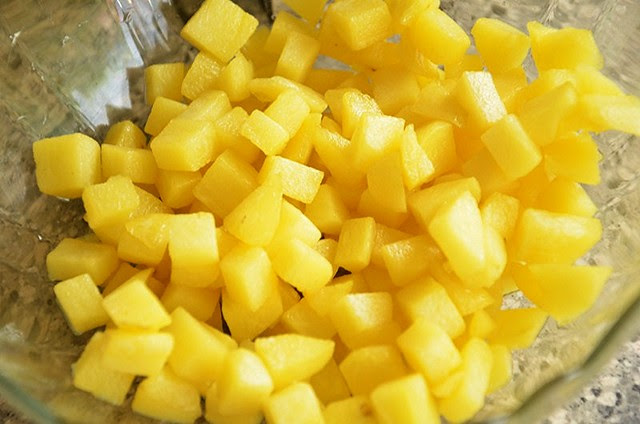 1. Cut about 3 potatoes into 2 cm cubes (these were cut too small) and deep fry them until golden brown and crispy (mine were underfried). For a healthier version, do not deep fry but add potatoes after meat is seared. 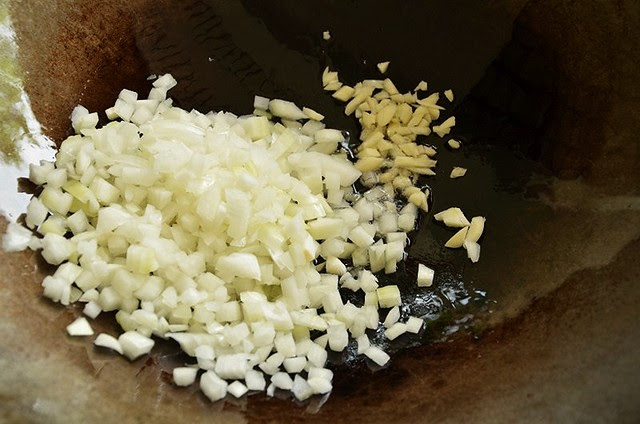 2. Chop a large brown onion and 3 cloves garlic and fry them in veg or olive oil until soft. 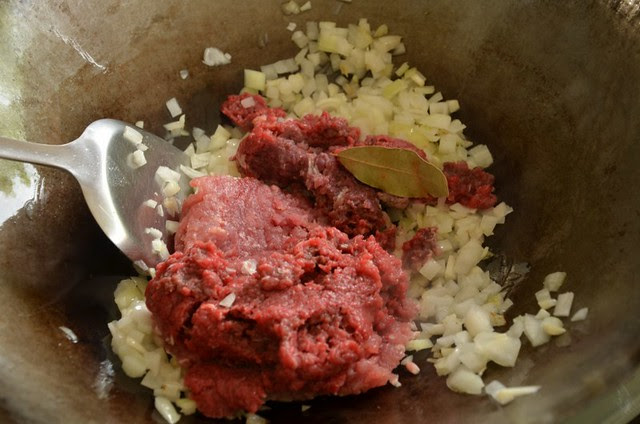 3. Add 500 gm each of pork and beef mince (I prefer to buy the beef and pork and hand-chop them) and a bay leaf to the onions and garlic and stir fry, breaking up the meat. 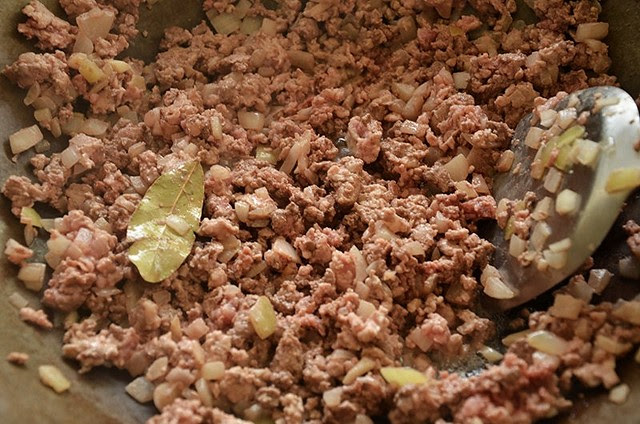 4. Fry in medium-high heat until meat has turned white. 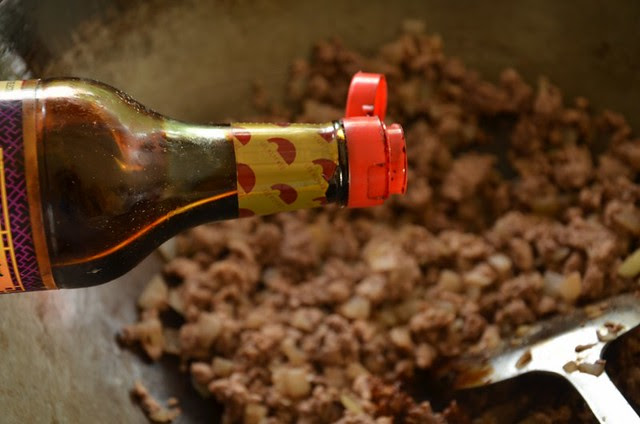 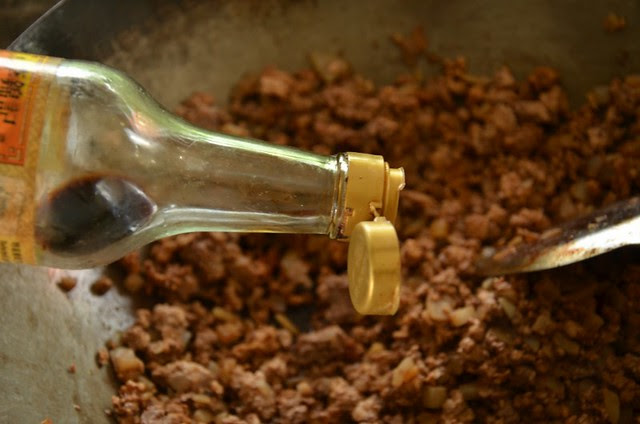 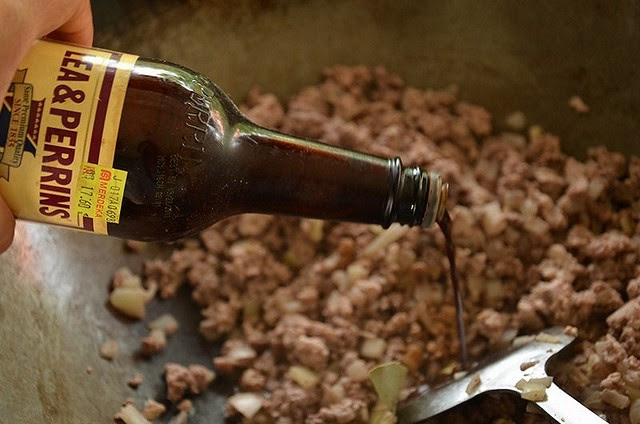 7. Add about 2 tablespoons of Worchestershire sauce (less if you don't like the tart taste), mixing well with the meat. Worchestershire sauce reminds me of Mrs Epps, a Eurasian-Ceylonese neighbor who taught me English when I was in Primary 3. I wanted to be like her--cook well, keep a nice house and dress well all the time. And oh, always have music in the house. 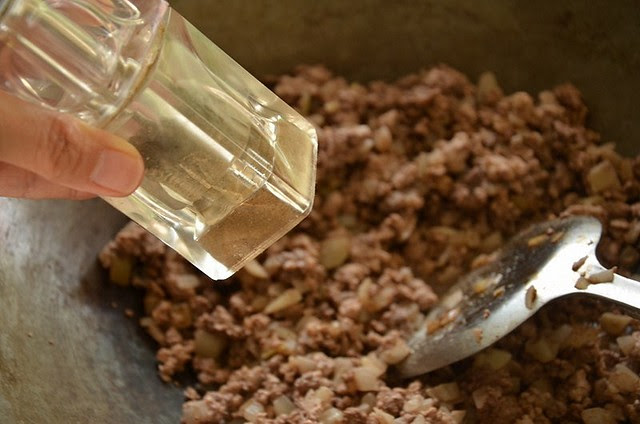 8. Some white or black pepper. Cumin and tomato paste too if like. Season with a bit of sugar. 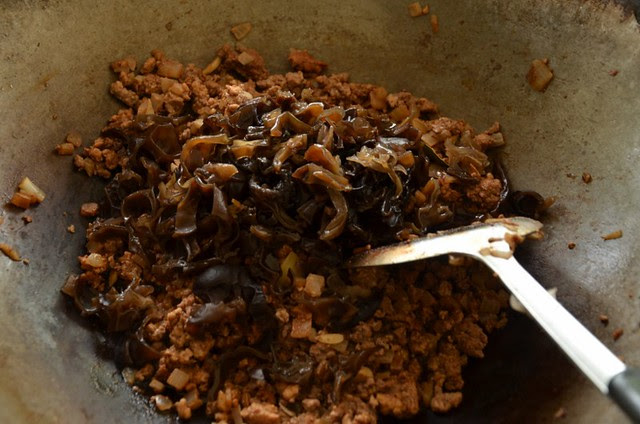 9. Add the chopped cloud ears and 3 tablespoons or more of water. Stir well. 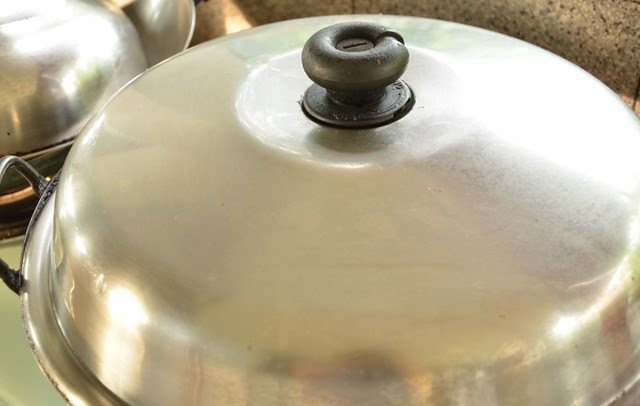 10. Lower the heat, cover for a couple of minutes, checking now and then to make sure the mixture doesn't burn. 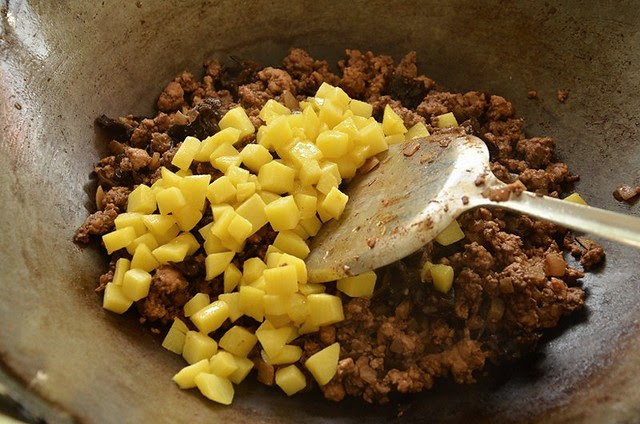 11. Taste and season if necessary. Add the potatoes and dish up. Eat immediately or reheat before serving. 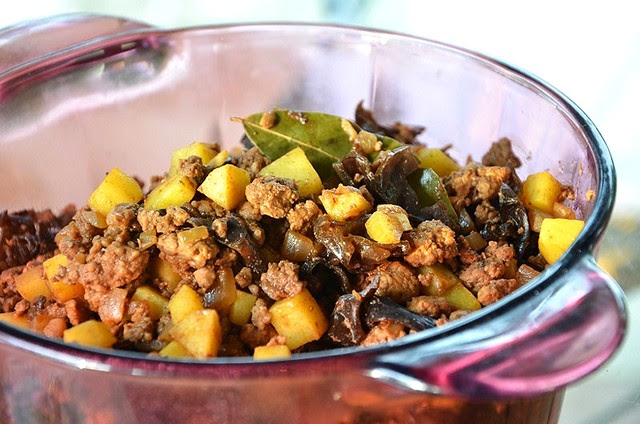 Minchi is usually eaten with rice and a fried egg and it tastes yummy when just cooked but remember that this is simple, ordinary comfort food. I felt it was an Asian bolognese sauce but Wey said it's a little bit American chili. The next time I cook this, I'll omit the black fungus because the dish tastes better with potatoes, and I'd add more potatoes too.

Posted by terri@adailyobsession at 12:12 AM

Ahhhh, is this what this dish is called? I learned to make a version of this from my Singapore-based sister-in-law's Filipina maid. I fry the pork mince first, then add the diced potato to cook in the same pan. The seasonings are just black and light soy sauce and pepper. My kids love it, as do SIL's kids.

I make a version of this very often. I don't bother deep frying the potatoes but add it all in as soon as the mince is browned. I also add in cubed zucchini or beans or cabbage. I usually feel quite virtuous feeding this to my kids as they love it and it's got veg and I don't have to nag or coax them to eat it! Mine is just caramel sauce, soy, pepper and just a touch of sugar as I use beef. Also add enough water to stew all the potatoes and zucchini so it's soft.

yes Terri, Anthony Bourdain does make his travels look really hip. Also, I don't know how he can eat like that and still be so lean. Of course, occasionally, one can detect a slight belly but he still looks quite trim. :P

And that greying hair of his reminds me a little of the Richard Geer look...

lilian: looks like i'm the last to know of this dish:) yes, i think it's a simple tasty dish tt everyone likes, esp the cook bc it can be cooked in 15 minutes.

jinkar: i would do tt next time for a healthier version. just thought i shd follow the recipe when doing it the first time. yes, this is a great dish bc it has meat, veg n carbs.

brook: he's sexy haha. hey, u know huang xiao ming? my friend was on the same flight with him to taipei this week n he was so nice. his manager wouldn't let my friend n family take a photo with him but when they landed, he went over n said let's take a photo! he was so gorgeous in the TV series The New Bund. check him out, i think he's better looking than pitt or geer, ok maybe only person he's at par with is keanu:)

My mother's family is Macanese, and my grandmother always cooks minchi with molasses. I substitute with brown sugar. We use potatoes but not the fungus.

This means that you literally kill fat by eating Coconut Fat (including coconut milk, coconut cream and coconut oil).

These 3 researches from big medical magazines are sure to turn the traditional nutrition world around!